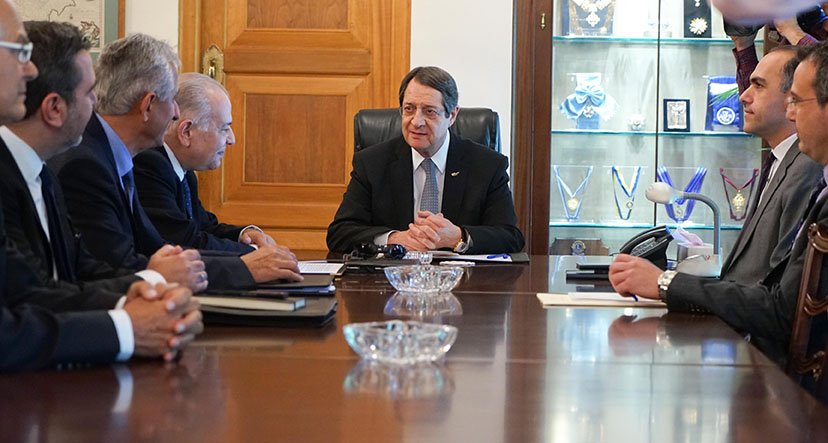 President Nicos Anastasiades meeting with members of Sykala on Wednesday

Despite previous disavowals, the government is now open to proposals toward providing restitution to the depositors of now-defunct Laiki Bank who lost their uninsured savings when the bank went under in 2013, it emerged on Wednesday.

In a meeting with President Nicos Anastasiades at the Presidential Palace, also attended by Finance minister Harris Georgiades, the association of former Laiki depositors (Sykala) presented “new proposals, as well as updated older ones”.

Georgiades told reporters after the meeting that “the state, the president, and the government acknowledge that some of our fellow citizens have suffered a cost owing to errors and omissions of the past, primarily in the real economy, where businesses went bust and jobs were lost, but also in the banking sector, where depositors suffered losses”.

“This fact is acknowledged, and I believe that at the same time the state’s difficulty in turning back time and undoing this damage, this cost our fellow citizens have suffered, should also be acknowledged,” Georgiades said.

“Still, we have agreed to continue the dialogue.”

As a result of decisions made by the Eurogroup in March 2013, Laiki Bank, then Cyprus’ second-largest lender, was shut down, with uninsured customer deposits – over €100,000 – seized and the bank’s assets taken under administration by the Central Bank of Cyprus.

In his remarks, Sykala leader Adonis Papaconstantinou said that it was agreed that various proposals, both by the association and the finance minister, would be examined.

“We will soon make our presentation to the president so that we can identify what can be done and what cannot be done to start finding solutions to existing problems,” he said.

The government, Papaconstantinou conceded, “does not have a cheque-book from which it can start issuing cheques to depositors”.

“But we believe there are solutions, which we will first present to the minister and then the president, and we hope they might be viewed positively,” he said.

Asked whether the option of reimbursing Laiki depositors with shares in the co-operative network, the Sykala leader said it has been neither ruled out nor fleshed out in any detail.

“It’s something that is in the minister’s notes,” he said.

“But there is nothing definitive on this issue.”

Following two taxpayer-funded recapitalisations of the co-ops since 2013, the network of lenders is now 99 per cent state-owned.

Georgiades had hinted at the shares-for-deposits swap as a possible solution during discussion of the government budget at parliament last year.

When rage fuels passion on the screen