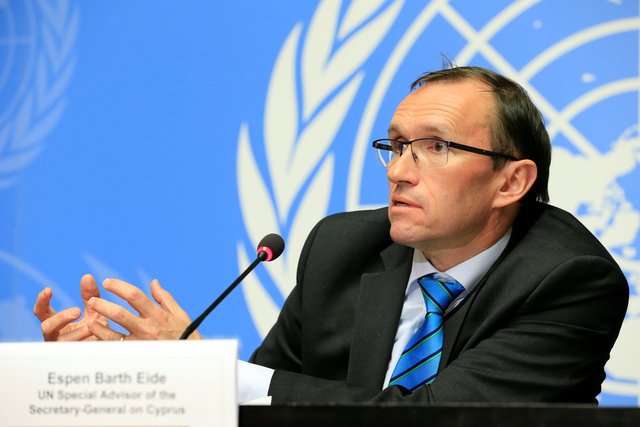 Reunification talks are going better than what appears to the outside world, Espen Barth Eide, the UN Secretary General’s Special Adviser said on Thursday.

He was speaking after meeting the chief negotiators of the two sides, Andreas Mavroyiannis and Ozdil Nami.

Eide said the UN was “quite impressed” with the outcome of the meetings between the negotiators during this week and the last.

The parties were working hard to overcome certain issues that have been pending for some time, he added.

Asked about the negative climate surrounding the talks process, the UN official attributed this to quarters on both sides opposed to a settlement and “who are comfortable with the status quo.”

On the critical issues of security and guarantees in a reunited island, as well as the question of the ‘four freedoms’, Eide said these could be resolved only if the parties returned to a Geneva-like conference.

His sense was that the parties would like to return to Geneva, however it was agreed that they should take specific steps in Cyprus before that could happen.

Asked whether the two sides can bridge the gap on security and guarantees, given their considerable differences, the Norwegian diplomat said that in reality the two sides are closer than what is widely believed.

Responding to another question, Eide denied reports of an agreement between the two sides for a freeze on gas exploration activities while talks are underway.

He has not engaged in any discussion on such a moratorium, he added.