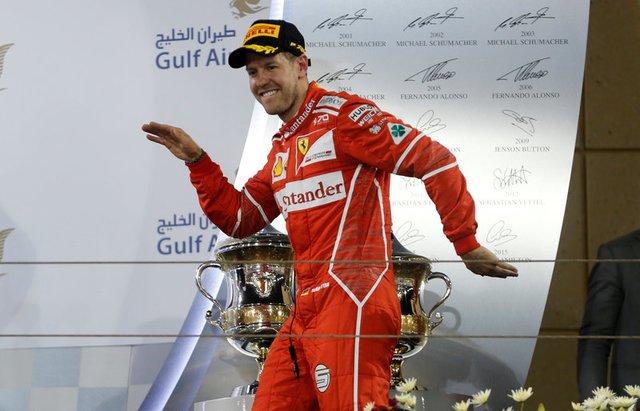 Ferrari’s Sebastian Vettel is enjoying his best start to a season since he was at Red Bull in 2011, leading Lewis Hamilton by seven points after two wins in the first three races

Formula One champions Mercedes have led every lap of every Russian Grand Prix since the race made its debut around Sochi’s Olympic Park in 2014 but Ferrari’s Sebastian Vettel will aim to break that streak this weekend.

The four times world champion is enjoying his best start to a season since he was at Red Bull in 2011, leading Lewis Hamilton by seven points after two wins and a second place from the first three races.

Another win, at the street circuit where the German finished second in 2015, would signal Ferrari’s best opening four races since 2008.

“Things start to click and hopefully that sort of success now in the first couple of races helps us to build up some sort of momentum that maybe these guys (Mercedes) had in the past,” said Vettel after winning in Bahrain on April 16.

Hamilton, presented with the winner’s trophy by Russian president Vladimir Putin in 2014 and 2015 before now-retired Mercedes team mate and champion Nico Rosberg won from pole position last year, felt the pain in Bahrain.

“We’re going to push hard together, re-gather as a team and come back fighting,” he said after collecting a time penalty and finishing second.

Mercedes, who still look faster over a single lap in qualifying, have done plenty of homework since then but recognise they have a battle on their hands.

“In this season with these new regulations, you can’t take anything for granted,” said team boss Toto Wolff.

“The trophies of previous years don’t guarantee that we’ll be winning in Russia when you have a very fierce competitor like we do in Ferrari. We’ll take it one step at a time…”

Hamilton saw team mate Valtteri Bottas take a career first pole position in Bahrain and the Finn has a good track record in Sochi too, setting aside a last lap collision with Ferrari’s Kimi Raikkonen in 2015 while battling for third place.

Bottas set the first fastest lap of his career there in 2014, on his way to third place, and it is a layout that he likes.

Red Bull, the only team to beat Mercedes last season, have yet to reach the podium in Sochi but both Australian Daniel Ricciardo and Dutch teenager Max Verstappen are hoping for more excitement this time with cars loading more G-forces than previously.

“I expect this year for the track to be grippy and with these cars it should be quite fast,” said Ricciardo. “I would say it’s going to be more enjoyable than it has been so I’m looking forward to that.”

Behind them, Force India’s Sergio Perez is chasing his 14th successive scoring finish while Sauber and McLaren have yet to open their accounts for the season.

Toro Rosso’s Spanish driver Carlos Sainz has a three-place grid penalty for his Bahrain collision with Williams’ Canadian rookie Lance Stroll, who has yet to see the chequered flag.

Drastic overhaul of police uniforms from May 1