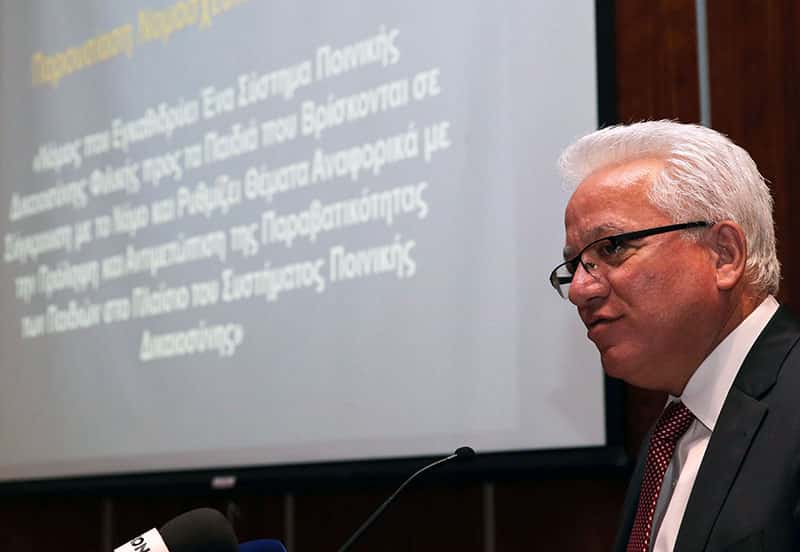 The best interests of the child will be taken into account in a new bill regulating issues of youngsters who are suspects that was presented on Tuesday by Justice Minister Ionas Nicolaou.

The bill has been prepared in cooperation with the Children’s Rights Commissioner Leda Koursoumba and it incorporates the provisions of the EU Directive on procedural safeguards for children who are suspects or accused persons in criminal proceedings. These provisions must be adopted by the national legislation and enter into force by June 2019.

According to Nicolaou, the bill establishes decriminalisation of structures and procedures, where the best interests of the child are taken into account when taking any decision that affects them directly or indirectly, while the child is involved in the decision-making process.

“Criminal prosecution and detention of the child are the ultimate measure and are only enforced if any other measures have been tried and failed, while imprisonment is forbidden,” Nicolaou said.

“In cases of criminal prosecution of a child, the case will be dealt with by a special juvenile court on the basis of the principle that detention is the ultimate measure and that alternative sanctions or measures should be imposed,” he said.

The new bill is innovative, he said, as it establishes a child-centric legal framework based on modern approaches will fill the existing void as regards dealing with such cases.

“Neither the proper infrastructures nor the proper treatment exist today as regards the way in which justice is served for juvenile offenders in Cyprus,” he said.

According to Koursoumba, the bill ensures children’s rights “as it creates the conditions for the establishment of a child-friendly justice system, one that respects its inherent dignity and operates in accordance with its rights”.

A child-friendly justice system, Koursoumba said, is one that aims at minimising any contact between the child with the justice system.

She added that it is based on policies and programmes “that will work proactively in order to deal effectively and timely with even a possible occurrence of antisocial behaviour by a child”.

Early intervention by the state at the level of the family, school or community, proper assessment of the needs of a child with antisocial behaviour and treatment measures that serve the best interests of the child constitute a second line of defence for a society that wants and seeks to see each child grow to become a healthy and integrated person, Koursoumba said.

She added that this new approach as regards the relation of children with justice, requires the involvement not only of the justice ministry but also of the labour and education ministries.

The justice ministry launched a public consultation period for the bill until June 15.

MPs study ways for complaints to be made against traders