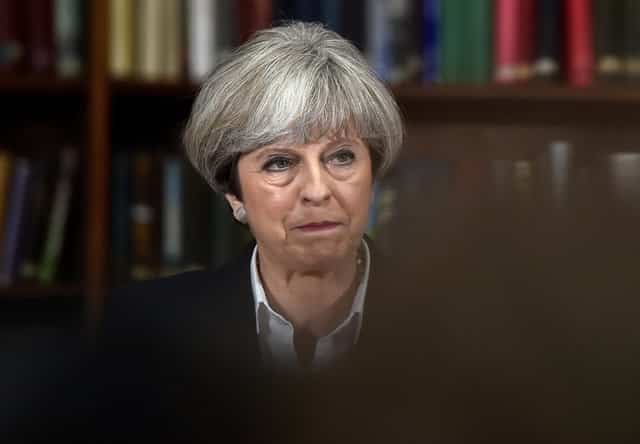 With the London attack dominating attention, a reduction in the number of police officers in England and Wales by almost 20,000 during May's six years as interior minister from 2010 to 2016 shot to the top of the election agenda.

By Kate Holton and William James

Britain’s election campaign resumed in earnest on Monday with Prime Minister Theresa May’s opinion poll lead narrowing and the focus firmly on her security record after an attack by marauding jihadis killed seven people in the heart of London.

In Britain’s third Islamist attack in as many months, three men rammed a van into pedestrians on London Bridge on Saturday night before running into the bustling Borough Market area, where they slit throats and stabbed people indiscriminately.

All three attackers were shot dead by police, who made at least a dozen arrests in east London on Sunday and carried out further raids on Monday morning.

The attackers’ identities are known but have not been disclosed, with British media refraining from publishing names at the request of police.

“This was an attack on London and the United Kingdom, but it was also an attack on the free world,” May said. A Canadian and a French national were among those who died, while the 48 injured included people of many nationalities.

A parliamentary election takes place on Thursday and May’s spokeswoman said the government was working closely with police on security for the vote.

With the London attack dominating attention, a reduction in the number of police officers in England and Wales by almost 20,000 during May’s six years as interior minister from 2010 to 2016 shot to the top of the election agenda.

London Mayor Sadiq Khan, of the opposition Labour Party, was among those who raised the issue.

“It’s just a fact that, over the last seven years, we as a city have lost 600 million pounds from our budgets. We have had to close police stations, sell police buildings, and we’ve lost thousands of police staff,” he said.

May did not answer repeated questions on the cutbacks but said counter-terrorism budgets had been protected and police had the powers they needed.

Her main opponent, Labour leader Jeremy Corbyn, backed calls for her resignation over the police cuts.

He said many people were “very worried that she was at the Home Office for all this time, presided over these cuts in police numbers, and now is saying that we have a problem”.

May’s Conservative Party’s lead over Labour has narrowed markedly from 20 points or more when she called the election in April to a range between one and 12 points now, although the Conservatives are still widely expected to win a majority.

The pound rose on currency markets, which favour May over Corbyn, after the latest ICM poll, taken between June 2 and June 4 and published on Monday, suggested the Conservatives were ahead by 11 points.

“TELL THEM CHRISSY SENT YOU”

After chairing a meeting of the government’s crisis response committee on Monday morning, May said the official threat level remained at “severe”, meaning an attack was highly likely, and additional security measures were in place.

Christine Archibald, a 30-year-old Canadian who had moved to Europe to be with her fiance, was the first of those who died to be named. In a statement, her family said she had worked in a shelter for the homeless.

“Please honour her by making your community a better place. Volunteer your time and labour or donate to a homeless shelter,” they said. “Tell them Chrissy sent you.”

A vigil to honour the victims was due to take place at 6 p.m. (1700 GMT) at Potters Fields Park near London City Hall, which stands by the River Thames, a short walk from London Bridge.

The rampage came less than two weeks after a suicide bomber killed 22 children and adults at a pop concert in Manchester. In March, five people died after a man drove a van into pedestrians on London’s Westminster Bridge and stabbed a policeman.

The Islamic State militant group, which is losing territory in Syria and Iraq to an offensive backed by a U.S.-led coalition, claimed responsibility for the London Bridge attack, though it is unclear whether the attackers had links to the group.

London police chief Cressida Dick said that, while some of the recent attacks in Britain had international dimensions, they had a largely domestic “centre of gravity”. Both the Westminster and Manchester attackers were British-born.

Khan, the first Muslim to be elected mayor of a major Western European city, was among those who denounced the ideology behind the recent attacks.

“I am angry and furious that these three men are seeking to justify their actions by using the faith that I belong to,” Khan said. “I condemn this terrorist act but also the poisonous ideology these men and others follow.”

With the issue of security now dominating the election agenda, May responded to the latest violence by saying Britain should be tougher in stamping out Islamist extremism.

The police response to the rampage, which saw officers shoot dead the attackers within eight minutes of police receiving the first call, has been widely praised.

But that did not stop the questions to May about police numbers during her time as interior minister. According to official data, officer numbers decreased every year that she was in the post, from 2010 to 2016. The number of authorised firearms officers in England and Wales fell to just under 5,700 in 2016 from nearly 7,000 in 2010.

Asked whether she regretted presiding over the cuts, May did not answer the question, saying London’s Metropolitan Police was well resourced and had powerful counter-terrorism capabilities.

“We have protected counter-terrorism policing budgets, we have also provided funding for an increase in the number of armed police officers,” she said.

May tried to deflect the pressure onto Corbyn, a pacifist who has opposed some security legislation in parliament and expressed reservations in the past about police responding to armed attackers with “shoot-to-kill” tactics.

He sought to end that earlier controversy on Sunday by stating that he backed the “full authority for the police to use whatever force is necessary to protect and save life as they did (at Borough Market), as they did in Westminster in March”.

A champion for the Cyprus community