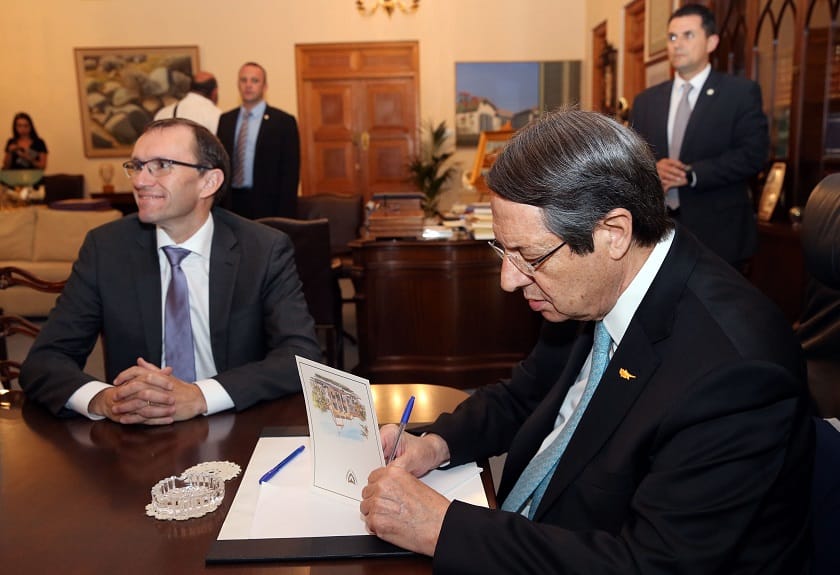 THE Conference on Cyprus will be held in Crans-Montana, Switzerland, Special Advisor to the United Nations Secretary-general Espen Barth Eide announced on Friday, following his meeting with President Nicos Anastasiades.

In his statements, following the meeting, Eide said that this is a historic opportunity.

He added that the conference, that is to reconvene on June 28, is to take place in Crans Montana. “It’s on the other side of the Geneva Lake, up in the mountains in a nice, secluded spot”. In addition to the work of the UN, he said, the Swiss Government is also extremely helpful in technical preparations and in providing these facilities.

Eide said he has informed both leaders about the practical arrangements around the conference.

“We know that it’s going to be difficult when we are there in Crans Montana, it’s also going to be a lot of work that has to be done before we go there, because we don’t want to come there empty-handed,” Eide said.

He added that the UN are working on a document which will guide the discussions on the security and guarantees chapter, “which is the chapter that has received less attention and which is now very important to highlight, but also of course preparations on the other issues, because there will be interdependent discussions on all outstanding issues”.

He said that they have ideas which he cannot spell out, adding that he was quite optimistic. “I don’t think the document is going to be an impediment to start the negotiations. I hope that it will be helpful to make them successful”. He added they made clear that they want all sides’ views to be well represented.

Both sides, he said, have confirmed that they go there with the ambition to solve the problem. “We know that is not a given, we have to be honest about that – it’s not getting easier just because we go to Switzerland, but there is a determination and a willingness that I can register now, that we go with that ambition”.

At the end of the day however, Eide said, “it’s up to the courage, the will, the determination and the leadership of the leaders, but also, at this point, of the guarantor states”.

In addition to the two community leaders, Turkey, Greece, and the United Kingdom will be at the conference as full participants, and the European Union as an observer.

As to the duration of the talks, Eide said that the UN are facilitating it in such a way that it can last for weeks. “But it doesn’t have to take weeks, it depends on the time needed, but we want to make sure that we have the chance to actually wrap up all the strategically important issues”.

He added that if success is achieved at the conference, there will still be work that must be made, and that it doesn’t mean that a referendum will be organised straight away.

“The aim is to have a strategic understanding of all those issues that are potential deal breakers, so that the leaders can say, “this will happen, and here’s the list of tasks that we still have to do”.

He refrained from commenting on the possibility of the talks faltering. “I’m not going to speculate on that because we’re going there with the ambition to succeed,” Eide said.

On Eide’s comment that the sides would need to spend weeks in Geneva, Anastasiades said on Thursday that, “hopefully, if it is a creative meeting, it will not take weeks.”

Foreign minister Ioannis Kassoulides told state broadcaster CyBC earlier in the day that the second conference is very important as to the course of the talks. He added that the Greek Cypriot side would like to know what the chapter of security entails concerning Turkey’s intentions since that would make things easier on the discussion of the other chapters.

“If Turkey does not make (its intensions) clear, weeks will simply pass discussing everything else but not security, and we will end up back to square one”. It is discussion on security, he said, that it will indicate if the upcoming talks will lead to a settlement solution. “If Turkey insists on its troops remining on the island, on the preservation of the Treaty of Guarantee, and on its right to intervene it will not make sense to do anything, since this will not be accepted by the Greek Cypriots”.

On Monday, Anastasiades convenes the National Council to brief party leaders ahead of the conference and according to reports, he is to invite them to accompany him to Switzerland.

According to the state broadcaster, the UN official is due in Athens on Tuesday for a meeting with Greece’s foreign minister Nicos Kotzias.

A subsequent visit to Ankara should be expected – though no date has yet been set – as Eide looks to complete his latest round of deliberations with the parties concerned.

Fire near Kormakitis sees people being evacuated from homes