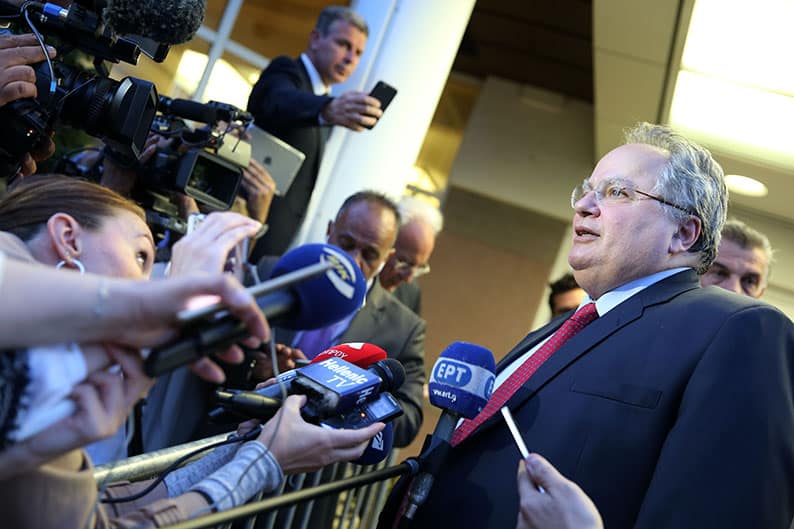 Almost a week after Cyprus talks failed in Crans-Montana, Greece and Turkey stepped up the rhetoric on Wednesday while initial party support for President Nicos Anastasiades’ handling of the negotiations appeared to be fading in the wake of electoral expediencies.

Main opposition Akel and Diko both criticised the president, the former saying he seemed to have failed to capitalise on the opportunities in Switzerland, while the latter said Anastasiades had made a “huge mistake” by revealing the Greek Cypriot side’s hand and allowing Turkey to gain everything while conceding nothing.

“Inconsistencies and regressions often characterise the political behaviour of Mr. Anastasiades, which in many instances has limited or even undermined the effectiveness of our side’s handling of the negotiating process,” the Akel Central Committee said in a statement, though the party made it clear that it believed Turkey was to blame for the talk’s collapse.

“We doubly wish that the president’s confidence that the sole responsibility for the failure belongs to Turkey and the Turkish Cypriot side, will be reaffirmed by the United Nations and the European Union,” it added.
Diko leader Nicolas Papadopoulos, the presidential candidate for the hardline parties of the ‘centre space’, also blamed Ankara but added:  “It is also clear that the wrong strategy of Mr Anastasiades and his wrong handling of the negotiations allowed Turkey to gain a lot without giving anything”.
“As a result, our side is now in a much worse position and the Turkish side is in a much better position than they were before this round of negotiations.”

The parties had appeared more united after the president briefed them on the talks during a National Council meeting on Monday. Deputy Government spokesman Victoras Papadopoulos said later Wednesday that the president would refrain from commenting on what the parties were saying ahead of the National Council meetings slated for next week, especially when it came to “pre-election expediencies”.

Meanwhile, Greek Foreign Minister Nicos Kotzias, who will attend next week’s meetings in Cyprus, hit back at Turkish claims that Greece was to blame for the talks’ collapse, and also had a dig at UN Special Adviser Espen Barth Eide.

On Monday, Kotzias suggested that Turkey had displayed an uncompromising attitude, which was followed on Wednesday statement from Turkish foreign ministry spokesman Hüseyin Müftüoğlu saying that Turkey attended Crans-Montana with goodwill and a constructive attitude

“In any case, all participants would be aware of who did and did not behave constructively,” Müftüoğlu said.

“Those who know that their approach is unconstructive and wholly devoid of the spirit of compromise, are prone to voicing baseless and untrue allegations so as to be able to blame those who display good faith and constructiveness, contrary to themselves,” Müftüoğlu added. He said Kotzias’ “useless efforts” to place the blame on Turkey were actually an attempt to disguise the fact that the negotiations failed because of the lack of good faith and political will on the part of his own country and the Greek Cypriot side.

But Kotzias then disputed the “goodwill” claims by Ankara saying that on the third day of negotiations, Turkish Foreign Minister Mevlut Cavusoglu started asking for the confirmation of intervention rights for Turkey on Cyprus. After constant quizzing, by himself, Kotzias said Cavusoglu “was eventually cornered” and admitted that Turkey wanted intervention rights “to be able, whenever we want to and see fit, to have a military intervention on Cyprus”.

“It was clear that that was a point of revelation,” said Kotzias. “They did not want, that is, to just safeguard their legal right to intervene in Cyprus but that they are planning on doing something like that [a military intervention],” Kotzias said.

Kotzias also criticised Eide saying the UN envoy did not stick to his mandate. “It would be a big mistake to identify the UN with Mr Eide. Mr Eide is a special adviser on the Cyprus problem. To me, the UN is the Secretary-General. The mediator was not mediating. He acted as a lobbyist or carrying out unilateral relations,“ Kotzias said.

The Greek foreign minister said Eide was going to Athens to see the leadership after being to Turkey and was even meeting a few hours before then, people at the Turkish embassy in Athens.

On Monday Anastasiades said in a news conference that when UN Secretary-General Antonio Guterres arrived back in Crans-Montana on July 6, the Turkish side let it be understood that it would display flexibility within the UN parameters regarding the intervention rights and the abolition of guarantees. But later at the fateful dinner “Cavusoglu stubbornly refused to reveal the Turkish positions, claiming they were known to the Secretary-General”.

He said then, “with a deadlock looming”, the Secretary-General “to avoid exacerbating the crisis, assumed the burden of responsibility” stating that there had been a misconception from his consultations with the Turkish foreign minister.

Cavusoglu was quoted as saying on Wednesday that Anastasiades’ remarks were “wrong, shallow and for domestic consumption”.

“The Greek Cypriot side had only one desire and criterion. They wanted zero soldiers on the island. In other words, the Turkish army will be withdrawn completely. The guarantee of Turkey will end and it will not have a unilateral intervention right. All bonds between Turkey and Cyprus will be broken. These are all they desired. This was a nonsense proposal and it was not possible for us to accept it,” he said.
He added: “Everyone including the EU was talking about this at the G20 Summit. Everyone knows what the problem is.”

Meanwhile, Turkish Cypriot leader Mustafa Akinci was quoted on Wednesday as saying the issue of guarantees was not the only problem in Crans-Montana.

Disagreements also existed on issues such as property, territory and political equality. Akinci claimed that “all kinds of games” were being played. “The presence of 40,000 troops was preferred [by the Greek Cypriots] to a military force of a few hundred,” he said in reference to Anastasiades’ ‘zero troops’ red line.

He argued that clear messages had been conveyed during the conference that the guarantees could be evaluated and the system could be re-examined.

Akinci said that the two sides had started explaining their versions of the reasons of the failure in Switzerland but he wished, he said that the UN would announce these reasons.

He understood that the UN’s position was sensitive and that their role was to facilitate the process, and commended them for their policy of keeping equal distance from the sides. Eide is due to brief the UN Security Council next week.