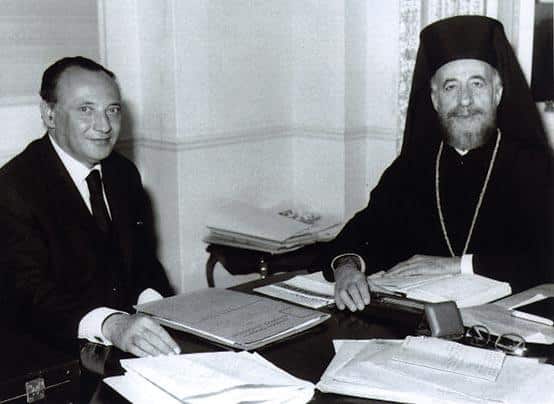 ONCE MORE, researcher and author, Antis Roditis, in an article titled Who remembers the abysmal mistake of 1964, which was published in Politis, discusses the stance of Makarios who, supposedly, ignored the suggestion to the Greek government by then US Secretary of State Dean Rusk for the unilateral declaration of enosis.

The Americans, according to Roditis, undertook the responsibility of ensuring Turkey would not respond militarily to such a move. The only condition Greece had to satisfy was the concession to Turkey of 5 per cent of Cyprus territory for a base, for which rent would be paid for 50 years.

Of course, the declaration of enosis would have been a subversive act by Greece – a de facto and not de jure enosis, given that Turkey, an interested party (guarantor power) would never consent to give up its intervention rights in Cyprus.

I have no doubt about the authenticity of the documents cited by Roditis, but I would like to share some thoughts about his conclusions.

Admittedly, the US, because of its military and economic might, exercises influence over Turkey. But this influence has its limits. Throughout the years, Turkey always made it clear to everyone that it placed the ‘national interest’ above everything. This has been shown in practice. For example in 2003, when the US invaded Iraq, Turkey refused to allow US troops to pass through Turkish territory despite the persistent requests of the Bush administration.

The seizure of Cyprus by Greece – because this is how Turkey would have seen it – would probably have constituted the biggest national humiliation in the modern history of Turkey and it is naive and childish to think the Turks would have passively accepted this. They might not have been in a position to invade Cyprus in 1964, but there was a more nightmarish possibility – a Greco-Turkish war with devastating consequences for everyone. This was the view of most Turkish intellectuals.

But even if we assumed, for the sake of argument, that Turkey would have been defeated in such a war, it does not mean it would have accepted its losses and closed its account on Cyprus. It would have prepared for a new round of hostilities with unforeseeable consequences. God only knows how this brinkmanship would have ended.

Therefore, to say that Makarios committed a blunder, and an abysmal one at that, is nothing more than an arbitrary conclusion. Someone else could argue that Makarios had weighed all the pros and cons and subsequently rejected the Americans’ proposal, thus handling a dangerous situation with perspicacity and a sense of responsibility for the benefit of Hellenism. Does anyone need reminding of the fact that on the only occasion Greece attempted to impose de facto enosis, it caused the biggest disaster Cyprus ever suffered?

My other thought centres on the tendency, even today, of Greek Cypriots who study the history of Cyprus and their parrots in the Cypriot media world trumpeting or implying that enosis would be the ‘ideal’ solution, describing it as ‘national restitution’. This, perhaps, should surprise nobody if we take into account the nationalistic values with which we were imbued for so many decades. This is the biggest obstacle to researching history objectively and the reason we explore it emotionally.

Reading for example about Makarios, Grivas, Tassos Papadopoulos and other leading Cypriot personalities, the reader is given the impression the writers always rouse feelings in order to stress a mistake or a feat. In the above-mentioned case, Makarios’ mistake was described as ‘abysmal’, an adjective with emotional content that should not be used by a historical analyst.

The nationalist education was the reason we did not see the political and economic disadvantages of enosis. Even today it is forbidden for someone to say that Greece has again become the ‘pauper of nations’, as Makriyiannis used to say in the nineteenth century.

For someone to be a Greek, a Jew, an Arab etc, is what they believe and feel they are. As sociologists would say, it is a state of mind.

Breaking the stalemate? Five steps to make this possible