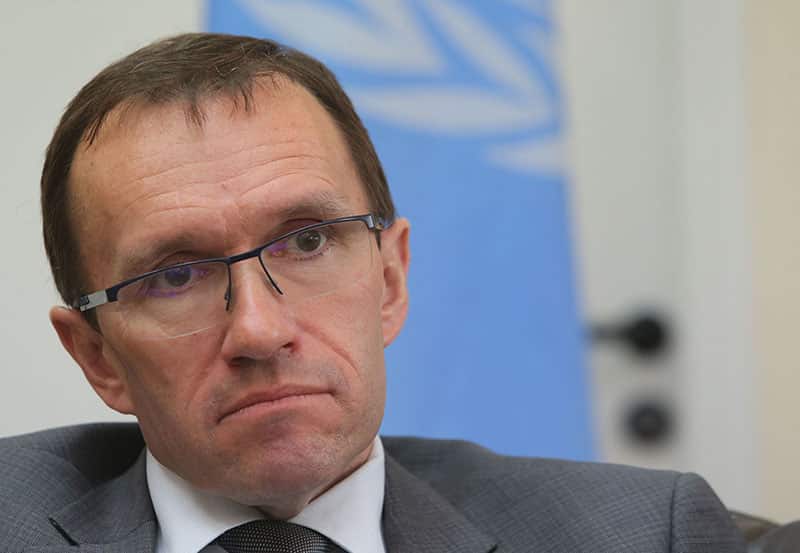 UN Special Adviser Espen Barth Eide sent a stern message to all sides on Tuesday to quit the blame game as to the crash of the settlement talks and reflect deeply as to the next steps.

Following a meeting in New York, where he briefed the members of the UN Security Council on what had happened at the talks at the Swiss resort in Crans-Montana, Eide said that the procedure was a collective failure of stitching together a deal.

He added that the Security Council, UN Secretary-General Antonio Guterres, the UNSG’s Special Representative in Cyprus Elizabeth Spehar and himself, “think that this is not the time to engage in blame game”.

“There’s more than enough of that going around, it seems that everybody has the view that everybody but themselves did everything wrong and they were the only one doing it right,” Eide said.
We have to admit that it was a collective failure of stitching together a deal in Crans Montana, he said, “despite of the fact that towards the end of the conference we saw more and more of the pieces of the puzzle actually coming on the table that came late, but we were not able to stitch it together to a total deal”.

He said that this was due to the perennial problem of the chicken and egg, “what comes first what comes second, all sides in many ways continued to reserve the final gives until they saw the cards of the other side”.

“The Secretary-General and the rest of us were trying very actively throughout the ten days of the conference and particularly in his presence on June 30 and then again on July 6 to overcome this by saying that in our view there is a package available where six separate important crucial issues are all settled, and only when they are all settled, we can say that we can have a deal,” Eide said.

He added that they thought that it would be possible, but they realized that it wasn’t. “The realisation came at the end of the very long and rather difficult dinner on the night of (July) 6 and moving into the morning of (July) 7. The mood at the dinner led the Secretary-General to conclude that at least there was no imminent purpose to continue, so we decided to close the Conference on Cyprus which began on January 12 in Geneva, and then ended on July 7 in Crans Montana”.

He added that Guterres, will always be available if the two leaders decide to continue but it’s up to them, as this a leader-led effort, and it can’t be nothing else. “We cannot do it for them. It has to be owned by the leaders and it has to be supported by the guarantors”.

He quoted Guterres who said in his report that the leaders now need to go through a process of reflection, “and we hope that they will not jump to conclusions, we hope they can reflect seriously on what can be done after the conference failed”.

“If they so do, we will be available, but right now, we don’t see there being a process. Given the number of developments domestically and around the island, I think it’s quite urgent that this reflection is done in the spirit of understanding and compromise rather than exacerbating the differences that clearly exist, either wise I think it will be even more difficult to restart any process,” Eide said.

Every single member of the security council, he said, deplored the fact that the conference failed. “They urged for restraint, they underlined the importance of a cooling-off period and very much underlined the mental idea that it’s up to the two communities and their elected leaders as to what to do next”.

In the meantime, he said, he and the UNSG will do a very substantive record of everything that has happened, “because it’s clear and it was also an element of almost every intervention by the council that this process took Cyprus closer than ever before to a settlement”.

President of the UN Security Council China’s Liu Jieyi said that the members of the Security Council expressed their intention to renew the mandate of the Unficyp for a further six months. Unficyp is one of the longest-running UN Peacekeeping missions.

He also reaffirmed their commitment to support the two sides in their effort to reach a comprehensive and durable Cyprus settlement.