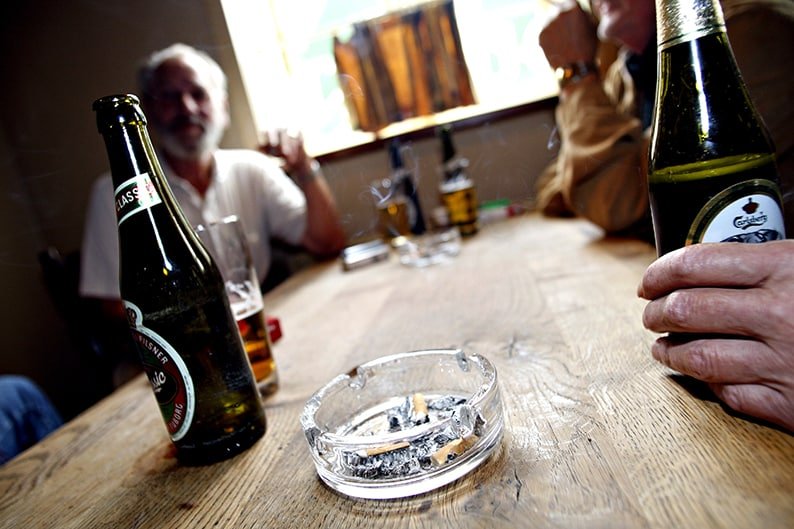 A customer enjoys a cigarette in Casino Bodega bar in Fredericia in Jutland, 14 August 2007. From 15 August smoking is no more allowed in bars, restaurants, cafés and work places in Denmark. EPA/Claus Fisker

Smoking is a killer, isn’t it? Well, yes and no.

Undoubtedly there have been tens of thousands of people around the world who have been victims of tobacco, but then there are also huge numbers of even very heavy lifetime smokers who have suffered absolutely nothing at all.

This inexplicable fact infuriates the quite rabid anti-smoking brigade such as the UK’s Action On Smoking and Health – ASH – whose neurotic and extreme swivel-eyed health fascism has been a feature of the anti-smoking culture for many years.

Here in Cyprus we have one of the highest smoking incidence figures in Europe, yet one of its lowest lung cancer statistics.  Nobody knows why this is.  But again, it infuriates the anti-smoking activists.

“We do not attack smokers or condemn smoking,” says ASH on its website, which has to be one of the most explicit pieces of double-think imaginable.

Among the several careers I enjoyed in a long life, my 25 years in the tobacco industry was probably the most challenging because I was the UK industry’s  media spokesman for much of the time.  At any newsworthy mention of a tobacco issue, I was wheeled out to comment or be interviewed.

Any increase in the annual tobacco tax was an example, where the industry would comment that if the UK government were to harmonise tax rates with Europe then the huge tax losses through illegal imports into Britain would be stopped overnight.  But this was never taken into account and these losses still occur.

It is so easy to hop over to Belgium and incur the small risk of being caught bringing back a thousand pounds worth of hand-rolling tobacco on which the return would be your thousand pounds back together with a thousand-pound profit.

I must have done hundreds of always hostile live and recorded radio, television and print media interviews. Following these, I could expect unspeakable and anonymous messages, not excluding death threats. You name them, I got them.

And on another occasion, I shared a live interview with the author of the excellent book The Easy Way To Stop Smoking.  The author, Allen Carr, who later died of lung cancer, described me in the studio as “a slug, someone who should be stepped on and disposed of” – at which the interviewer invited me to respond.  I said to Allen Carr that his book had sold millions and made him extremely wealthy, but it probably wasn’t the prime reason why smokers quit when the cost of their habit was unquestionably the deciding factor.

I added that rather than get further worked up and red faced, he might be better off having a cigarette and a lie down – which brought loud and prolonged laughter from the studio audience.

My then industry found the frantic folks from ASH totally committed and beyond any capability to think logically. One example was their idiotic plan to impose plain packaging and conceal displays in shops when there has never been the slightest proof that either measure has reduced smoking. This plain packaging has simply stolen the intellectual property of the tobacco manufacturers to promote what currently remains a perfectly legal product for sale.  The pictures forced upon the manufacturers for display now include illustrations of cowed men with erectile dysfunction.

We have been told that nowadays more people would like to be able to smoke in a pub than not.  However, many pubs have closed because of the ban.

We have also been told that certain types of heart disease have been falling year on year since bans have been introduced. That is true, but they were also falling before bans were introduced and banning smoking seems to have had no effect whatsoever.

And then there is so called ‘passive smoking’.  Smoking certainly annoys non-smokers, especially near a meal.  As a non-smoker myself, I find it irritating and discourteous, but whether other people’s smoke would give me lung cancer is quite another matter.

Yet ASH now wants bans in beer gardens, outside areas of restaurants and in all manner of public places.

I give it ten years before smoking is banned in the home.

My belief has always been that if a given government wishes to outlaw smoking and pass up the millions in tax income, then bite the bullet and just ban the product altogether.  But there are one billion, one hundred million smokers worldwide; tens of countries where tobacco is grown as a staple crop and on which a given country depends economically, both from the sale of the leaf, and the tax on the locally manufactured product. Yet it’s been described as a ‘sunset’ industry. Some sunset!

Two drunks and the keys of the Cyprob

British Airways a tatty shadow of its former self