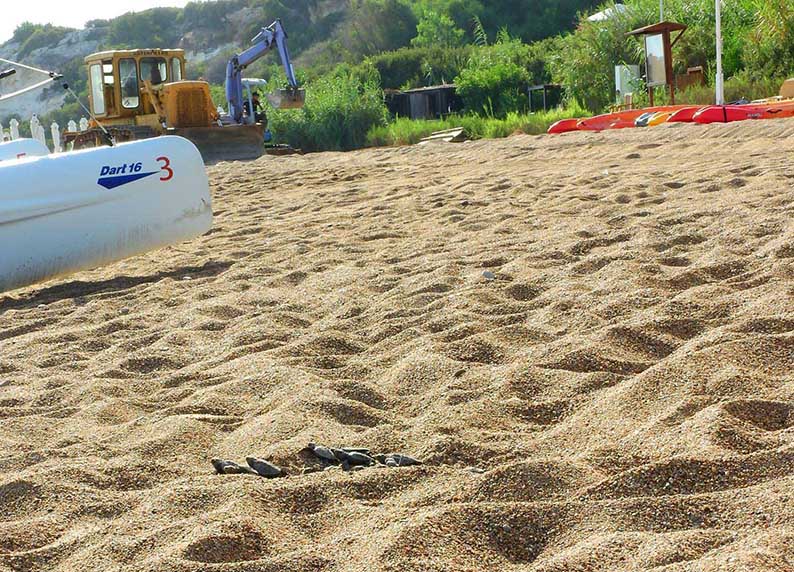 Agriculture Minister Nicos Kouyialis on Tuesday intervened to put a halt to a private party set to take place at the luxury Anassa hotel in Latchi, Paphos later this week, after it emerged bulldozers at the scene were endangering turtles at a Natura protected beach.

The furore surrounding the case emerged on social media after pictures were posted online of preparations for a private party that a guest had organised at the beach in front of Anassa hotel.

Videos showed turtles heading towards the sea while excavations could be heard in the background.

In a tweet, Kouyialis said “as far as interventions at a Natura beach are concerned, I have not given any permission, nor have the agriculture ministry services (which also include those of the environment). I asked that work is immediately ceased!”

The permit had been granted to the Anassa hotel guest by the Paphos district officer who had not sought the opinion of the fisheries or environmental departments.

“We had to send letters to receive any information. The Paphos district officer has provided it, but I believe the fisheries department and environmental departments should have been informed first,” the minister said.

Environmental department officials had gone to the scene in Akamas to investigate before Kouyialis announced his decision.

The party, hosted by a Russian, was set to take place on Thursday for 150 people, Anassa hotel general manager Sebastian Wurst told the Cyprus Mail.

According to Neo Chorio community leader Andreas Christodoulou, under whose jurisdiction the area falls, the permit cost €500.

The Paphos district officer was not immediately available for comment, but Christodoulou told the Cyprus Mail the negative comments were simply deterring investors. “This person from Russia, do you know how much money they’ll spend for this event? Do you know how much money this party will bring to our country? The way some people are behaving is deterring people from investing in our economy.”

Wurst confirmed a permit had been received from the authorities and added that the hotel had taken a personal interest to ensure the turtles would not in any way be endangered.

The manager clarified that the hotel had a permit for sunbeds but as this was a large event, it required a separate permit, which the guest had received.

“Apart from the permits we also care for the turtles. The nests are marked and the contractors are aware of it, I went there myself to check,” Wurst said.

Images circulating online, however, angered the general public after a bulldozer was seen at the same scene as the turtles. “This kind of behaviour is indicative of utter insensitivity from businesses that have no qualms,” about destroying the environment, Greens MP Charalambos Theopemptou told the Cyprus Mail.

“There’s a video which shows the turtles heading towards the beach while excavations can be heard in the background,” he said.

Commentators online said this brought the country to shame and was an indication that “money is talking here. Like all things in Cyprus. As if they’d care about turtles.” “The damage (to the turtles) is taking place with the blessings of some of the responsible in the area. The reason? A rich wedding,” the person who uploaded the photographs said.

Asked to comment on concerns based on the Natura status surrounding Akamas beaches, Christodoulou said “there’s not a single nest there,” where the event is set to take place, while adding that “humans and turtles can co-exist.”

According to Theopemptou, authorities need to stop giving such permits that make these kind of activities a lucrative business.

“This isn’t the first time this happened.” “Stricter punishments need to be put in place. The law doesn’t permit for bulldozers there,” Theopemptou said. “People are very sensitive to this matter but the problem is businesses have tremendous ease and no qualms about doing things like this.”

In response to one Facebook commentator who said the whole saga was an indication that the state “was asleep,” someone said “unfortunately it isn’t sleeping. It just looks the other way when it’s in its favour.”

Another online post questioned what local authorities were even doing. “They’ve transformed Akamas into a private fiefdom, disregarding its natural environment, which is entirely unique.”

One woman who shared the photographs simply captioned that “the brutal destruction of the Natura 2000 beach in front of Anassa hotel, where protected species of turtles lay their eggs, is disgraceful and unacceptable!!!”

Electricity bills to fall 6 per cent