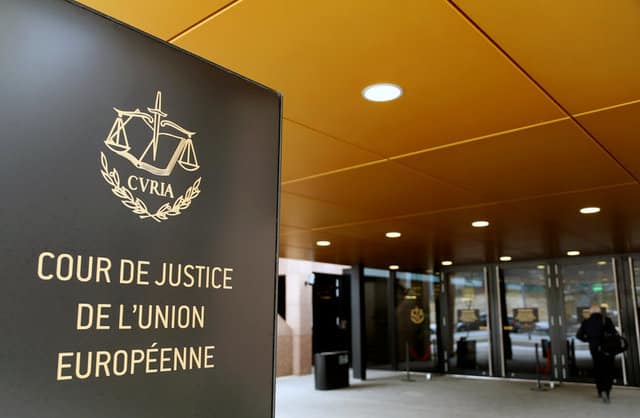 The European Union’s highest court ruled on Wednesday that EU states must take in a share of refugees who reach Europe, dismissing complaints by Slovakia and Hungary and reigniting an angry row between east and west.

The government of Hungary’s nationalist Prime Minister Victor Orban was characteristically blunt about the European Court of Justice, calling its decision to uphold an EU policy drafted in the heat of the 2015 migrant crisis as “appalling” and denouncing a political “rape of European law and values”.

However, Germany, which took in the bulk of over a million people who landed in Greece two years ago, said it expected the formerly communist states, including Poland, which supported the complaint, to now fall in line and accept the ruling that the Union is entitled to impose quotas of asylum-seekers on states.

The Luxembourg-based ECJ rejected the Hungarian and Slovak claims that it was illegal for Brussels to order them to take in hundreds of mainly Muslim refugees from Syria, which they said threatened the security and stability of their societies.

“The mechanism actually contributes to enabling Greece and Italy to deal with the impact of the 2015 migration crisis and is proportionate,” the court said in statement.

Italy, now the main destination for migrants risking the Mediterranean crossing, is prominent among wealthier, Western states in threatening their eastern neighbours with cutting their EU subsidies if they do show solidarity by taking people in. Slovak Prime Minister Robert Fico said he would still not take a quota but was ready to help in other ways.

A sharp decline in numbers arriving, partly a result of the effective closure of routes from Turkey to Greece and from Greece into Macedonia and toward northern Europe, has taken some of the heat out of the arguments and diplomats expect the EU executive, the European Commission, to propose new ideas.

“We can expect all European partners to stick to the ruling and implement the agreements without delay,” German Foreign Minister Sigmar Gabriel said in a statement.

The eurosceptic AfD party, which expects to win seats in the Berlin parliament at a national election on Sept. 24, crticised the court ruling as proof that unelected “Brussels bureaucrats” were imposing on states — though in fact the Commission’s quota policy was backed by a majority of the member state governments.

Calling the court ruling “appalling and irresponsible”, Hungarian Foreign Minister Peter Szijjarto said: “This decision jeopardises the security and future of all of Europe.

EU asylum law states that people arriving in the bloc should claim asylum in the first member state they enter but that rule was exposed as unworkable when hundreds of thousands arrived in economically struggling Greece and Italy. Arguments over what to do struck at the heart of the Union’s cooperation and chaotic movements of people saw member states try to seal borders with each other, dealing a heavy blow to a key EU achievement.

The migration crisis came at a time of deep soul-searching about the Union’s future and some questioned its survival.

However, a drop in migrant numbers, to which cooperation on tightening the common external border has contributed, as well as an economic upturn and election defeats for anti-immigrant parties has steadied nerves in Brussels, despite the difficulty posed by Britain’s vote last year to exit the bloc.

The programme provided for the relocation of up to 120,000 people from Greece and Italy, but less than 30,000 have so far been moved, partly through difficulties in identifying suitable candidates. A further programme for resettling people directly from outside the EU has also struggled to hit targets.

Hungary and Poland have refused to host a single person under the 2015 sharing scheme, while Slovakia and the Czech Republic have each taken in only a dozen or so.

While the EU has sought in vain to come up with a compromise, the court ruling may just force Brussels’ hand.

It is a delicate balancing act as putting such a thorny issue to a vote, and possibly passing a migration reform despite opposition from several states, would cause even more bad blood.

“If we push it through above their heads, they will use it in their anti-EU propaganda at home,” another EU diplomat said of Poland and Hungary, where the nationalist-minded governments are embroiled in disputes with Brussels over democratic rules.

“But the arrivals are low, we have it more or less under control, so we have to get back to the solidarity mechanism.”

ExxonMobil plans to drill in second half of 2018  (Updated)