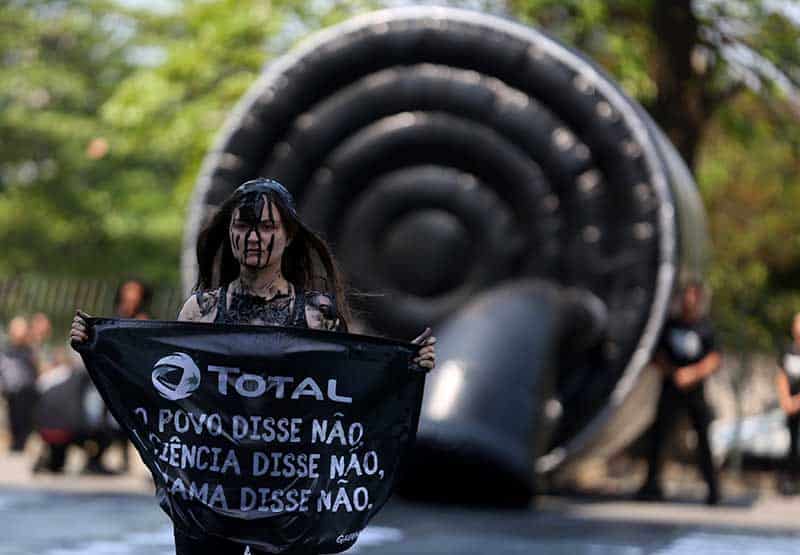 A Greenpeace activist holds a sign during a protest to defend the Amazon reef outside the French oil company Total's headquarters in Rio de Janeiro, Brazil in September

Deforestation in Brazil’s Amazon fell 16 percent in the year to July 2017 compared to the same period a year prior, the first decline in three years, the country’s environment minister said on Tuesday.

Reasons for the decline included stepped-up enforcement and refinements in real-time monitoring that allow for rapid response to deforestation, Minister Jose Sarney Filho told a news conference at the presidential palace in the capital, Brasilia.

However, Paulo Barreto, a senior researcher for non-profit Amazon institute Imazon, said economic recession in Brazil and a drop in livestock prices were likely the major cause for the decline. The cattle industry is a major contributor to deforestation.

The Amazon, the world’s largest tropical rainforest, soaks up vast amounts of carbon and is seen as vital to the fight against climate change.

“Surveillance and control help, but it is not a solution. We will only end deforestation when we value the standing forest,” Sarney said.

“But we are reaching the limit. If we do not fulfill international agreements, especially for payment for environmental services, it will be very difficult to maintain the fall in deforestation,” he said, referencing a system of payments to landowners in exchange for maintaining forest on their property.

Environmentalists said the fall was important but it was too soon to celebrate.

Deforestation needs to fall much further in order for Brazil to meet its climate change targets, said Alfredo Sirkis, general coordinator for the Brazil Forum for Climate Change.

Deforestation must fall to an annual loss of no more than 4,000 square kilometers by 2020 to meet a climate change target known as a nationally appropriate mitigation action (NAMA), a concept adopted in connection with the 2009 Copenhagen Accord, said Sirkis, a former politician and co-founder of Brazil’s green party.

“At least we can say the curve has inverted, but there’s lots of stuff to do, and we have to try harder,” Sirkis said.