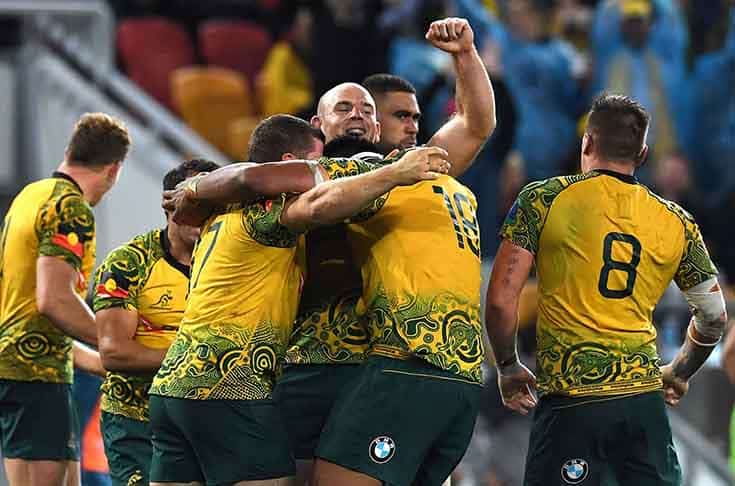 Australia produced a performance of huge character to beat New Zealand 23-18 and secure their first victory over the world champions in eight tests after a thunderous scrap of a third Bledisloe Cup clash at Lang Park on Saturday.

The match was a dead rubber after New Zealand beat Australia twice in the RugbyChampionship but it looked anything but that as the two sides slugged it out on a surface made greasy by persistent rain.

Australia put the world champions under a lot of pressure and scored three tries to the two of their opponents before defending desperately in the final minutes as the All Blacks threatened a late winning try.

“We didn’t win any comps tonight but it goes a long way to building confidence in this team.”

Tries from wingers Reece Hodge and Marika Koroibete as well as a 12th of the season from fullback Israel Folau had given the home side a 20-13 lead with 15 minutes of the match remaining.

Waisake Naholo had crossed in the first half for the New Zealanders and his fellow winger Rieko Ioane got their second in the 71st minute only for Damian McKenzie to miss the conversion.

A 55-metre Hodge penalty two minutes from time gave the Wallabies some breathing space but they have lost so many contests to their trans-Tasman Sea rivals at the death that it was with immense relief that they greeted the final whistle.

“Two quality teams really put it in,” New Zealand captain Kieran Read said. “The conditions didn’t allow the teams to play the way they wanted but plenty of grit and fight from both sides.”

Australia came into the match with a settled side and were confident of a good showing against a New Zealand team without World Rugby Players of the Year Beauden Barrett and Brodie Retallick.

The visitors had the better of the early exchanges, though, and were pressing for the opening score when Hodge snatched Lima Sopoaga’s pass out of the air and raced 80 metres for a Wallabies try in the seventh minute.

The All Blacks were soon back on level terms, however, after going through 10 phases on the Australian line and making room for Naholo to cross untouched on the right wing.

Sopoaga slotted two penalties to put New Zealand 13-7 ahead but the Wallabies hit back just before the break when Folau cut between Naholo and flanker Liam Squire to score.

Bernard Foley missed the conversion and a penalty at the start of the second half and it was not until the 57th minute that the home side went ahead on the back of their third try.

A penalty kicked to touch was followed by a catch-and-drive and, with the referee’s hand raised to indicate another All Blacks transgression, Australia moved the ball wide for Koroibete to touch down in the corner.

The All Blacks were never going to fold and a Sonny Bill Williams offload made space for Ioane to race down the touchline for the score that set up the late drama.

New Zealand beat Australia 54-34 in Sydney and 35-29 in Dunedin in the first two tests and so were already assured of retaining the Bledisloe Cup for a 15th successive season.

Musical firsts set for next week