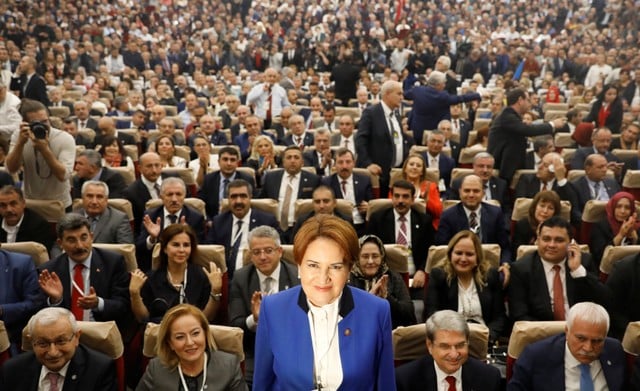 Meral Aksener, a former Turkish interior minister and deputy parliament speaker, is pictured during a meeting to announce her new political party in Ankara

A prominent Turkish nationalist politician and former minister announced on Wednesday she was forming a new party which could pose a significant challenge to President Tayyip Erdogan in elections due within two years.

Her Iyi Parti (Good Party) is seen by many in Turkey as potentially one of the strongest challengers to Erdogan in presidential and parliamentary elections scheduled for 2019, but it starts out with only a fraction of the AK Party’s support.

Just five members of the 550-seat parliament have joined the new party, although pollsters say it could win over supporters of several parties including the conservative and Islamic-rooted AK Party as well as secular or nationalist groups.

“Turkey and its people are tired, the state is worn down, and public order is unravelling. There is no way other than the changing of the political atmosphere,” Aksener said at a ceremony in Ankara to mark the launch of her party.

“We are that way out, you are that way out. That road is the 80 million strong Turkish nation” she said, standing in front of the logo of her party – a yellow sun shining in a blue sky. “Our people are clearly saying they want … a new government.”

Aksener was expelled last year from the Nationalist Movement Party (MHP), the smallest of three opposition parties in parliament, after launching a failed bid to unseat party leader Devlet Bahceli, whose support helped Erdogan to a narrow victory in a referendum that expanded his authority.

Since her expulsion, the 61-year old Aksener has become one of the most prominent voices in the country, frequently criticising Erdogan and the government.

The Iyi Party could take more than a tenth of the AK Party support, which stands at over 40 per cent, said Hakan Bayrakci of Sonar pollsters. It could also erode the support base of nationalist MHP and the secularist CHP parties, he said.

“Meral Aksener’s party will lead to big changes in Turkey’s political atmosphere,” Bayrakci told Reuters. “This may not be immediate, but in three to five months, I believe this shift will be visible.”

Erdogan’s AK Party won just under 50 percent of votes in the last parliamentary election, in November 2015, and he has told supporters it is aiming for more than half the votes in 2019.

Mehmet Ali Kulat from polling company Mak Danismanlik, which is seen as close to the AK Party, said the Iyi Party currently had the support of around 5 percent of voters.

“It looks like Aksener’s party can get votes from angry voters,” Kulat said. “Their real strength will come out in the long term.”

Aksener said many members of her party wanted her to stand as its presidential candidate in the 2019 election, and criticised what she described as an erosion of rights in Turkey.

“Democracy is under threat and the government’s justice is above all else. It is evident that society is at a political standstill,” Aksener said.

Since a failed military coup last year, in which more than 240 people were killed, Turkish authorities have detained more than 50,000 people and suspended 150,000 people including teachers, soldiers, journalists and lawyers.

Aksener said her party aimed to raise the average length of education in Turkey from seven years to 11 years, and promised to bring Turkey into the world’s top 20 countries for education. It currently lies around 50th in the Programme for International Student Assessment (PISA).

In previous weeks, several members from the MHP and the secular main opposition Republican People’s Party (CHP) have quit their parties to join Aksener, who has said her party’s doors were open to anyone “willing to walk with their cause”.