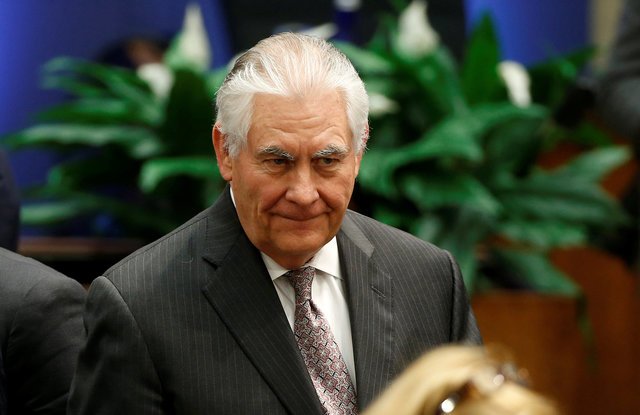 U.S. President Donald Trump said he was unsure whether his top diplomat, Rex Tillerson, would remain in his post for the rest of Trump’s term in the White House and was “not happy” that some State Department staff were not supporting his agenda.

In an interview with Laura Ingraham on Fox News late Thursday, Trump attacked the department under Tillerson, the secretary of state, and said he alone determines U.S. foreign policy.

Asked if he planned to keep Tillerson on board for the rest of his term, Trump told Fox, “Well, we’ll see. I don’t know.”

Trump is heading to Asia on a 11-day trip with Tillerson following months of conflict between the two.

Tensions between Trump, a real estate developer and reality television star who took office in January, and Tillerson, the former chief executive officer at energy major Exxon Mobil Corp , resurfaced last month amid reports that Tillerson had called Trump a “moron” and had considered resigning over the summer.

Tillerson, in an unusual news conference at the time, said he never considered leaving. Trump later said they had a good relationship but criticized Tillerson for being weak.

Tillerson’s State Department has also been at odds with the White House over various global issues, including rising tensions over North Korea’s nuclear weapons program.

Richard Haas, president of the Council of Foreign Relations, said Trump’s comments spelled trouble not just for the current secretary but for overall American foreign policy.

Tillerson has made overhauling the department a top priority and tightened control by consolidating his authority. Critics have decried the reorganization and unfilled key jobs at a time when international crises continue around the world with Syria, Iran, and elsewhere.

At a meeting of former national security advisers last month in Washington, former Secretary of State Colin Powell told H.R. McMaster, Trump’s national security advisor, that the administration was gutting the state department. McMaster replied that there were people who did not support the president’s agenda, two people present told Reuters.

On Thursday, Trump said many of the posts were not needed and that he is “not happy” with others already there.

“I want my vision, but my vision is my vision,” he said. “Rex is in there working hard … he’s doing the best he can.”