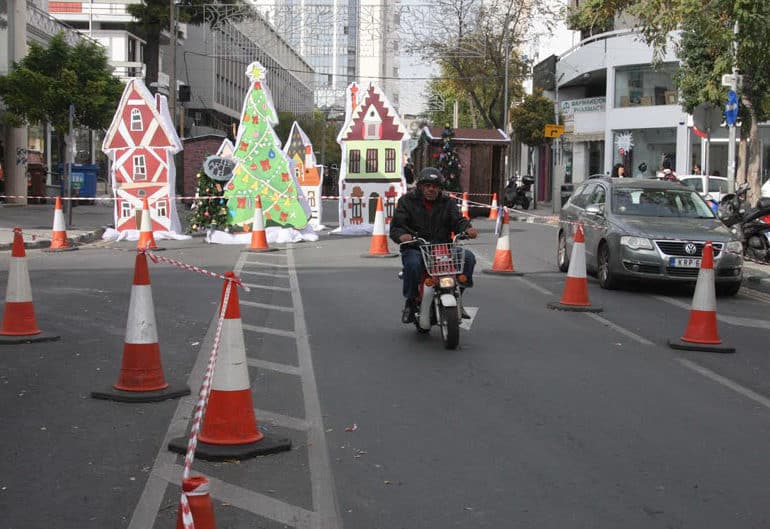 NICOSIA municipality’s announcement that it would organise its main Christmas event in the old municipal square in a very cramped and not traffic-friendly part of the old town, raised eyebrows this week mainly over chaos it would create, as it is expected to attract tens of thousands of visitors to an area with narrow streets, limited parking and a construction site, that will be the new town hall.

The municipality said the event, which was renamed to ‘Christmas Square’ after four years as ‘Christmas Avenue’, is to take place at the old municipal square throughout December. The event is to be of a smaller scale due to space restrictions.

Five Christmas houses are to be set up which will be rented out to merchants, while there will also be a Santa work shop, food and drink stalls and a number of events. The same space will also host the pop-up festival between December 1 and 31, which was also hosted on Makarios Avenues since 2013 when the once-main shopping thoroughfare began to go into decline following the banking crisis.

Since then, in an attempt to breathe new life into the ailing avenue at least once a year, the municipality has been renting empty shops at low rates to young entrepreneurs, authors, artists, artisans and other professionals and start-ups to present their innovative ideas and their work to the public for about a month.

According to the spokesman of the Nicosia Municipality, Makis Nicolaides, traffic will not be an issue as the public will be able to park free of charge in areas outside the old part of town and use the services of the municipal buses to get to the Christmas Square.

“They can use the municipality’s buses. They can park at GSP stadium free of charge and catch a bus to the old town,” Nicolaides told the Sunday Mail. He added that they are looking to increase the routes of the buses during December.

But Makarios Avenue, will not be left out, he said.

“We decided to transfer the project within the old town, but there will be events on Makarios Avenue and in various other squares of the town; Phaneromeni, Kaimakli, Ermou, Chrysaliniotissa etc,” he said.

According to another source within the municipality, the reason why the events moved to the old town is that the municipality was sued last year for disturbing the peace in the area by organising Christmas Avenue. The municipality had been closing part of Makarios Avenue to traffic and pedestrianising it.

In 2015, two Makarios Avenue business owners, had collected 150 signatures asking the Supreme Court to ban the initiative as it hurts their own business. Besides shops, the street is also home to a large number of law firms and other businesses.

The businessmen had argued that the event “offers nothing other than noise to the public, traffic inconveniences, congestion in nearby roads, and the pollution of Makarios Avenue.”

The municipality had decided last year it would be the last time they would hold their main Christmas events on Makarios Avenue, the same source said, as they were expecting that the redevelopment of Eleftheria Square would be completed and it could host future events.

But that didn’t happen either.

The municipality had announced last March that part of the project, the bridge, was to be opened to the public by the summer, while the redevelopment would be completed but further delays however have moved the deadlines.

The ongoing works on the square, which are around four years overdue, has become a joke among Nicosians. A Facebook group that call themselves LipithiteMas, (Have mercy on us) have launched an event on the grand opening of the square, for December 31, 2099. The invitation, that is supposedly sent by the Nicosia Municipality says: “The moment you’ve all been waiting for!”, while underneath it says: “Thank you for your patience (suckers)”. So far, more than 500 said they would attend.

But not all of Makarios Avenues’ business community agree with the relocation of Christmas Avenue.

“It was revitalising; it helped business a lot for a month. Now Makarios Avenue will flounder,” a shop-owner told the Sunday Mail.

A delegation of the shop owners has already met with Nicosia Mayor Constantinos Yiorkadjis to ask that some events are at least organised on their street.

“He was very positive, he told us that they would plan events on Makarios Avenue,” another shop owner, Ioli Loizidou said.

She added that despite the fact the avenue will not be pedestrianised this year, it will still be decorated and that Christmas events will take place there. The group, she said, aims at cooperating with the municipality to plan events and actions for next month.

The municipality said that it would announce later in November its full schedule of Christmas events and activities.

Tales from the Coffeeshop: Amnesia politikanticus aka post-election disease