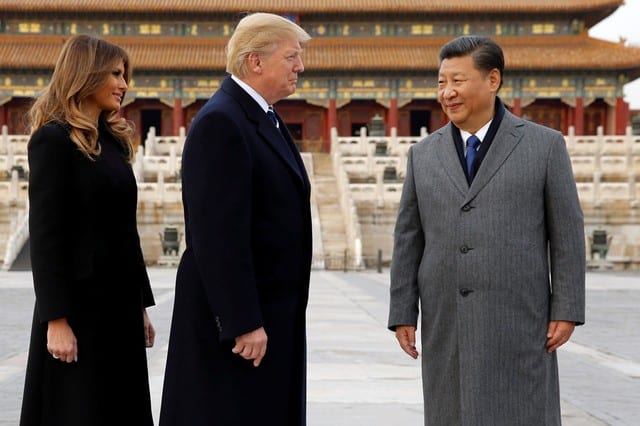 US President Donald Trump arrived in China on Wednesday seeking help to rein in North Korea after warning the North’s leader that the nuclear weapons he is developing “are not making you safer, they are putting your regime in grave danger.”

Trump used some of his toughest language yet against North Korea in a wide-ranging address in Seoul that lodged specific accusations of chilling human rights abuses. He called on countries around the world to isolate Pyongyang by denying it “any form of support, supply or acceptance.”

“Do not underestimate us and do not try us,” Trump told North Korea as he wrapped up a visit to South Korea with a speech to the National Assembly before heading to Beijing, where he was making his first official visit.

Trump painted a dystopian picture of the reclusive North, saying people were suffering in “gulags” and some bribed government officials to work as “slaves” overseas rather than live under the government at home. He offered no evidence to support those accusations.

Trump’s return to harsh, uncompromising language came a day after he appeared to dial back the bellicose rhetoric that had fueled fears across east Asia of the risk of military conflict. On Tuesday, Trump had even offered a diplomatic opening to Pyongyang to “make a deal.”

He went mostly on the attack in Wednesday’s speech but did promise a “path to a much better future” if North Korea stopped developing ballistic missiles and agreed to “complete, verifiable and total denuclearization” – something Pyongyang has vowed never to do.

“We will not allow American cities to be threatened with destruction. We will not be intimidated,” he told South Korean lawmakers. “And we will not let the worst atrocities in history be repeated here, on this ground we fought and died to secure.”

The North defends its nuclear weapons and missile programs as a necessary defence against what it says are US plans to invade. The United States, which has 28,500 troops in South Korea, a legacy of the 1950-53 Korean war, denies any such intention.

“The world cannot tolerate the menace of a rogue regime that threatens it with nuclear devastation,” Trump said, speaking as three US aircraft carrier groups sailed to the Western Pacific for exercises – a rare show of such U.S. naval force in the region.

In Beijing, Trump and Chinese President Xi Jinping resumed their “bromance” struck in April at Trump’s Mar-a-Lago resort in Florida, making small talk as they toured the Forbidden City – which was shut down to tourists – with their wives before taking in a Chinese opera performance.

While the sprawling palace complex in the political and cultural heart of Beijing is a regular stop for visiting dignitaries, it is rare for a Chinese leader to act as a personal escort, confirmation of the “state visit-plus” treatment that China had promised for Trump.

Trump has threatened action over China‘s wide trade surplus with the United States and called on Beijing to do more to rein in ally and neighbor North Korea, but has expressed admiration for Xi and held off on imposing trade measures.

During his two-day visit, Trump will ask China to abide by UN resolutions and cut financial links with North Korea, a senior White House official said on the plane from Seoul.

He also plans to discuss with Xi the long-contentious trade imbalance, US Commerce Secretary Wilbur Ross said at a ceremony with US business leaders where $9 billion worth of deals were signed.

Trump and Xi were scheduled to hold formal talks on Thursday.

Before leaving for Beijing, Trump cited China as one of the countries that must fully enforce international sanctions against Pyongyang and downgrade diplomatic and commercial ties.

“To those nations that choose to ignore this threat or, worse still, to enable it, the weight of this crisis is on your conscience,” he said.

While Trump will try to convince Xi to squeeze North Korea further with steps such as limits on oil exports and financial transactions, it is not clear if Xi, who has just consolidated his power at a Communist Party congress, will agree to do more.

China has repeatedly said its leverage over Pyongyang is exaggerated by the West and that it is already doing all it can to enforce sanctions.

The Chinese Foreign Ministry said that China fully and strictly implements UN Security Council resolutions on North Korea, but will investigate if there have been any contraventions.

During his speech in Seoul, Trump directed his words at North Korean leader Kim Jong Un.

“The weapons that you are acquiring are not making you safer, they are putting your regime in grave danger,” he said. “Every step you take down this dark path increases the peril you face.”

However Trump, whose strategy has stressed sanctions and military pressure instead of diplomacy, did not spell out any new approach.

North Korea has made clear it has little interest in negotiations at least until it develops a nuclear-tipped missile capable of hitting the US mainland, something US intelligence officials say it may be just months away from achieving.

“North Korea is a country ruled by a cult,” Trump said in a speech that was interrupted several times by applause and ended with a standing ovation.

He stopped short of repeating the derisive nickname “little Rocket Man” that he has used to describe the young North Korean leader.

Kim, for his part, has called Trump “mentally deranged.”

The speech came after Trump’s attempt to make an unannounced visit to the heavily fortified border separating North and South Korea was aborted when dense fog prevented his helicopter from landing, officials said.

A visit to the DMZ, despite his aides’ earlier insistence he had no plans to go there, would have had the potential to further inflame tensions with North Korea.

Trump and his wife Melania were greeted at Beijing’s airport by a military band playing a festive tune and school children jumping up and down and waving American and Chinese flags.

They descended from a red-carpeted staircase rolled up to the main door of Air Force One. That was in contrast to a 2016 visit to China by his predecessor, Barack Obama, who was forced to exit his plane from a lower door in what was seen as a snub.

And while in China, Trump will not be deterred from using Twitter, his favored form of communication, despite its being banned there, according to an administration official.

“The president will tweet whatever he wants,” the official told reporters on Air Force One.

“I’m sure we’ve got the gear aboard this airplane to make it happen.”

Social artist who was summoned by bells