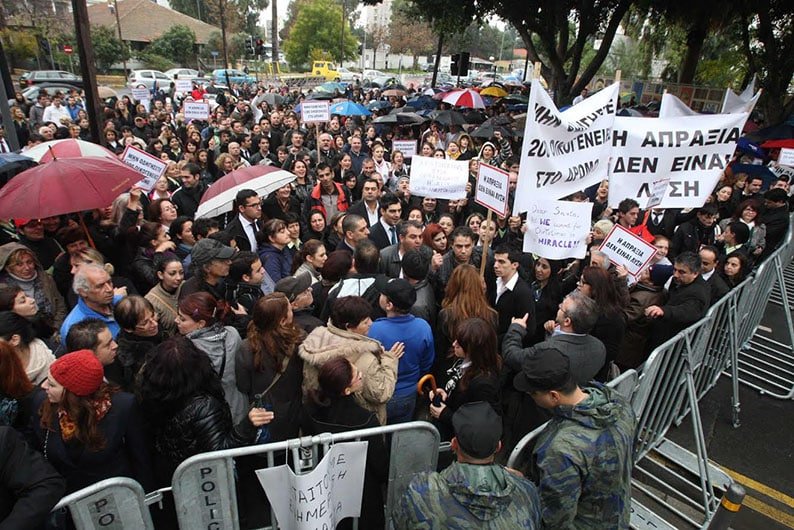 Demonstration in March 2013 at the height of the banking crisis

For such a vocal people with a strong sense of what’s owed them, Cypriots should make great protesters, but whenever they do express their ire it tends to be on very narrow issues that directly affect them.

No one, for example, takes to the streets over the staggering extent of state corruption or the unacceptable delays in big projects such as Nicosia’s Eleftheria square which have inconvenienced thousands of residents for years. True, the two biggest disasters since the invasion – the 2011 Mari explosion and the 2013 banking crisis – did lead to protests, but they were of limited size and duration when compared to the scale and significance of the events themselves. They were certainly a pale imitation of what you would expect to happen elsewhere.

“There were some protests when Mari happened, and with the economic crisis but little compared to other countries in the south of Europe like Spain, Portugal, Greece and Italy,” said political scientist Vassilis Protopapas who specialises in political behaviour at the Cyprus University of Technology.

While big, more general concerns are ignored, protests over issues affecting the pockets of specific groups are well-organised and often successful.

The environment is a good example.

Despite a general sense that we need to act on environmental issues, says the head of environmental group Terra Cypria Lefkios Sergides, people don’t act when there is no personal economic interest. He cites the example of when new planning regulations were brought forward for the Akamas. There was a huge “explosion” in the form of a demonstration which fizzled out far too quickly.

But when the protest is one of narrow self-interest, the picture is quite different, particularly if there is political backing.

“There are those who want illegal things legalised, like bird poaching, and they are very active,” Sergides said. “They protest, put political pressure and use threats, like when they threatened not to vote.”

When it comes to the relationship between economic self-interest and protests, the figures speak for themselves.

According to the Independent newspaper, which used data from the European trade union institute, Cyprus lost the most working days in Europe because of industrial action. Between 2009 and 2013, 514 days per 1,000 employees was the count, while the fewest days were lost in Germany, just 12. And the Cypriot protesters can insist as well. The number of days lost peaked in 2013 due to an open-ended strike in the construction industry over the renewal of an industry-wide collective agreement, the longest in Cyprus history since 1948.

Another example is the roadworks in Aglandjia, Nicosia. While there are serious questions over whether the massive extension works were necessary, and while a small but determined group have protested over the number of trees that have been felled to widen the roads, the most vocal protests have been from business owners in the area who have seen their sales plummet.

So why are the protests so selective? Why do Cypriots avoid the big issues?

For president of the sociological association, Nectarios Partasides, the answer is clear. The unique history of Cyprus has made Cypriots subjects not citizens.

The succession of conquerors distorted social development with the Ottomans and colonialists aiming to maintain social stagnancy.

“In the rest of Europe processes took place which prepared people psychologically to live in sovereign states,” he said. “Cyprus never had an industrial revolution and the enlightenment was late and not that substantial, barely getting beneath the skin.”

As a result, people didn’t develop into citizens who have rights but also obligations to the state, with the two of them going hand-in-hand. Instead, Cyprus society became a ‘subjectship’, with people behaving as subjects who wait for things to happen instead of being part of social action for the good of society.

People don’t feel the state belongs to them and look instead at what is in it for themselves in a country where favouritism and factionalism distort collective actions.

Protopapas agrees. “Traditionally Cypriots have been ruled by foreigners and they have been obedient, peaceful and servile. They are dealing with their individual awareness and not the public sphere.”

There has been a long history with no revolutions and few protests. Evidence of this, Protopapas said, is that there are few big public squares in Cyprus where people are encouraged to gather, the only ones being in Omodhos and Heroes square in Limassol.

This is also reflected in universities whose students rarely demonstrate about anything, he said.

He believes this is not necessarily bad. There might simply not be much to protest against. It could also be that there is also no alternative, at least not one that people feel they can fight for.

“The collective mentality not to bother to protest has been passed from generation to the next. Yes, there is the exception of when in the 1950s a handful of people protested against British rule but we bask in this achievement while this is a reflective glory. In reality we have achieved nothing and wait for others to act,” says lecturer of sports sociology Antonis Alexopoulos.

In his view, fear also plays a role, a fear which is instilled from a young age to conform with the ruling classes and this small society’s norms.

“The idea is don’t shake the establishment,” he said. “Strikes by government employees are easy as there are no consequences, but where have there been strikes in the private sector? People appear as rebels within their safety zone only.”

And it as rebels in such a zone that explains the one other area where Greek Cypriots do protest: the Cyprus problem.

Partasides believes that after the 1974 invasion the protests evolved as a way for people to deal with a vital issue. Over the years it has become almost a social obligation to participate. The protests are certainly not spontaneous but are well organised political events.

Some environmentalists are hopeful that Cypriots are learning to be more proactive over the bigger issues.

“I hope and believe that things are changing,” says Martin Hellicar, the director of bird protection group BirdLife.

“In recent years more journalists are speaking out against subjects like poaching and younger people who have travelled more will change the way things are.”

Partasides believes change is possible, if people honestly try to initiate it, though he is convinced it will take time, maybe as much as a few generations. People, he says, need to be educated to act, not just acquire knowledge.

“Cyprus has the capacity to reach countries like Singapore or Switzerland. We need to find courage and claim our future.”

Merseyside derby ends in draw, Giroud rescues point for Arsenal against the Saints

Coronavirus: Animal Party says pet owners can go out without SMS but close to home