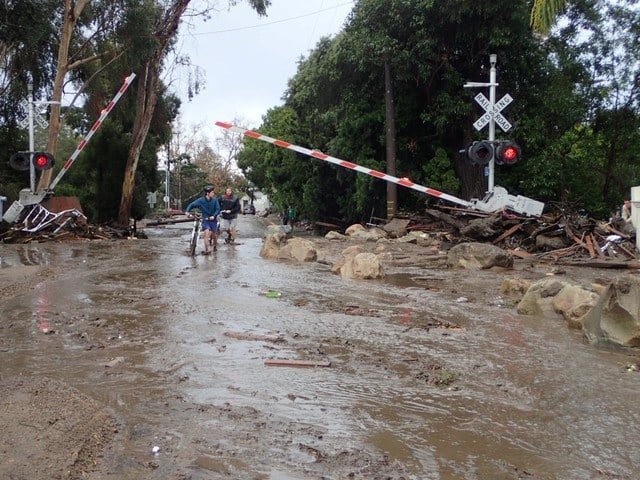 A section of the Union Pacific Railroad is blocked by mudflow and debris after a mudslide in Montecito, California

Mudslides, boulders and tons of debris killed at least 13 people on Tuesday in communities along California’s scenic coastline ravaged by a series of intense wildfires that burned off protective vegetation last month.

Heavy downpours struck before dawn on Tuesday after thousands of residents in Santa Barbara County along the Pacific coast north of Los Angeles were ordered to evacuate or urged to do so voluntarily, some of them for a second time since December.

But only 10 to 15 percent complied with mandatory orders, said Amber Anderson, a spokeswoman for the Santa Barbara County Fire Department.

The upscale communities of Montecito and Carpenteria, just outside the city of Santa Barbara, were hardest hit.

The mudslides toppled trees, demolished cars and covered blocks of quiet residential neighborhoods with a thick layer of mud, blocking Highway 101, a major north-south route along the coast.

“The best way I can describe it is, it looked like a World War One battlefield,” Santa Barbara County Sheriff Bill Brown said at a news conference.

The death toll could rise, with rescue workers still picking through dozens of damaged and demolished homes in the search for survivors, Brown said. At one point on Tuesday, at least two dozen people were missing, but Brown said later in the day that it was not clear how many had been located.

About 300 people were stranded in a canyon. Local officials, using borrowed helicopters from the U.S. Coast Guard, were working to airlift them out, Brown said.

The number of fatalities surpassed the death toll from a California mudslide on Jan. 10, 2005, when 10 people were killed as a hillside gave way in the town of La Conchita, less than 20 miles (32 km) south of the latest disaster.

The threat of mudslides had prompted the county to order 7,000 residents to leave their homes ahead of a powerful rainstorm and to urge 23,000 others to evacuate voluntarily.

The mudslides swept through both the mandatory evacuation zones and areas where people were urged to voluntarily leave, Brown said.

Brown, in response to questions of why some places were not part of the mandatory evacuation zone, said it was not possible “in a situation like this to define to the house or to the block or to the neighborhood” where a mudslide might occur.

The county set up an evacuation shelter at Santa Barbara City College, where some people showed up drenched in mud, and also provided a place for people to take their animals.

Last month’s wildfires, the largest in California history, left the area vulnerable to mudslides. The fires burned away grass and shrubs that hold the soil in place and also baked a waxy layer into the earth that prevents water from sinking deeply into the ground.

Some local residents had to flee their homes due to the fires last month and again this week because of the rains.

Among them was Colin Funk, 42, who sat up watching mud and debris approaching his Montecito house overnight and fled on Tuesday morning with his wife and three young children as thigh-high mud approached the front doorway.

“We started looking around and that’s when we saw parts of roofs and there was a body against our next door neighbor’s car,” Funk, who works as a financial adviser, said by telephone.

“I feel lucky,” Funk said. “Some people lost their lives in my neighborhood.”

Television personality Ellen DeGeneres, who is among a coterie of celebrities such as Oprah Winfrey and Rob Lowe who own homes in the upscale community of Montecito, posted a photo on Twitter of a roadway choked with mud and brown water.

“This is not a river,” DeGeneres wrote on Twitter. “This is the 101 freeway in my neighborhood right now. Montecito needs your love and support.”

Oprah Winfrey, who also lives in Montecito and had left her home during the wildfires, had not posted about the mudslides as of Tuesday evening.

Some areas of Santa Barbara County early on Tuesday were pounded with more than a half-inch of rain in five minutes, a rate that far exceeds the normal flash flood threshold, officials said.

“Where are the frogs and locusts? We’re waiting for them,” Dominic Shiach, a restaurateur from Montecito who evacuated due to last month’s fire, said by telephone. He lives just outside the latest evacuation zone.

Bannon steps down from Breitbart News after drawing fire from Trump