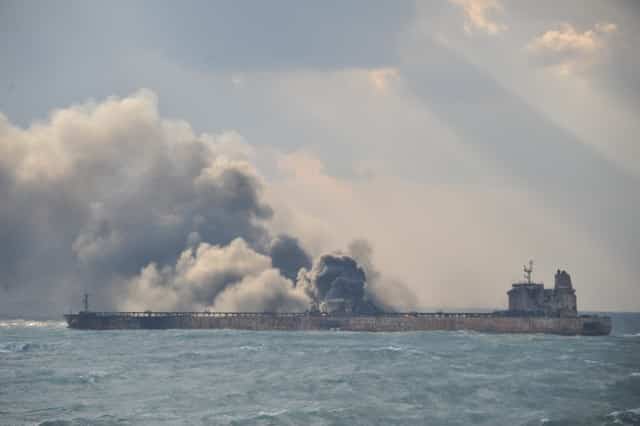 Smoke is seen from the Panama-registered Sanchi tanker carrying Iranian oil, which went ablaze after a collision with a Chinese freight ship in the East China Sea

Rescue crews were forced to retreat from a stricken Iranian oil tanker in the East China Sea on Wednesday following an explosion on the ship as a fire raged for a fourth day after a dramatic collision.

The blast happened on board the tanker in the afternoon after rescue crews were dousing the ship with foam in an attempt to put out the fire, China’s Transport Ministry (MOT) said in a statement on Wednesday.

The cause and damage to the tanker from the incident were not clear. The ship was carrying condensate, a highly flammable ultra-light crude, to deliver to South Korea when it collided with a Chinese freight ship on Saturday.

Dozens of rescue boats from China and South Korea have been battling strong winds, high waves and poisonous fumes to comb a 900-square-nautical-mile (3,100-square-kilometre) area for 31 missing sailors and tame the fire, amid growing concerns the listing ship may explode or sink.

Iran’s Navy joined the effort on Wednesday, a government official said, according to the Iranian Students’ News Agency (ISNA).

The lashing winds are expected to ease on Thursday, the MOT said.

The Sanchi was carrying 136,000 tonnes of condensate, equivalent to about 1 million barrels and worth some $60 million.

The Chinese government said late on Tuesday it had not found a “large-scale” oil leak, and the condensate was burning off or evaporating so quickly that it would leave little residue – less than 1 percent – within five hours of a spill. That reduces the chances of a crude-style oil slick.

Iranian officials said there was still a chance of finding survivors among the 31 remaining crew, who are all Iranian nationals except for two Bangladeshi citizens. The body of a crew member was found on Monday in the water near the tanker.

“If the crew have been able to reach (…) some place like the engine room, then the chances of their rescue are high,” said Hassan Qashqavi, a senior Iranian foreign ministry official, according to ISNA.

“But if, God forbid, they have been caught up in explosions because of flames inside the ship, then the chance of their rescue is small.”

Authorities and environmentalists worry though the ship is increasingly vulnerable to breaking up and sinking the longer the blaze rages. Still, the ultra light crude is highly volatile when exposed to air and water.

South Korea’s Ministry of Oceans and Fisheries warned on Wednesday the tanker could burn for up to one month, potentially expelling the tanker‘s bunker fuel, or the heavy fuel oil that powers a ship’s engines and contaminating the waters.

“We believe flames would last for two weeks or a month considering previous cases of oil tank accidents,” said Park Sung-dong, an official at the ministry.

Bunker fuel is the dirtiest kind of oil, extremely toxic when spilled, though much less explosive.

Fuel oil is relatively easy to contain because volumes are lower and its viscosity means it’s easier to extract from water, but even small volumes can hurt marine life.

“The problem is the ship’s heavy bunker fuel,” said Chauncey Naylor, a U.S.-based director of emergency response and training at Tyco Corp’s oil-fire specialists Williams Fire & Hazard Control, which is not involved in the clean-up.

“It burns real slow and it’s heavy and will lay on the ocean and on any twisted metal and create heavy smoke. It’s the stuff that spills and gets on birds.”

A Suezmax tanker can hold a maximum of 5,000 tonnes of bunker fuel to keep it running. The Sanchi may have been carrying about 1,000 tonnes by the time it hit the grain freighter, according to bunker fuel traders’ estimates.

Park said it’s unlikely the oil will spread to South Korea at the moment because the tanker has moved 100 kilometres (62 miles) to the southeast.

Baby found in rubbish bag was not stillborn (Update 2)