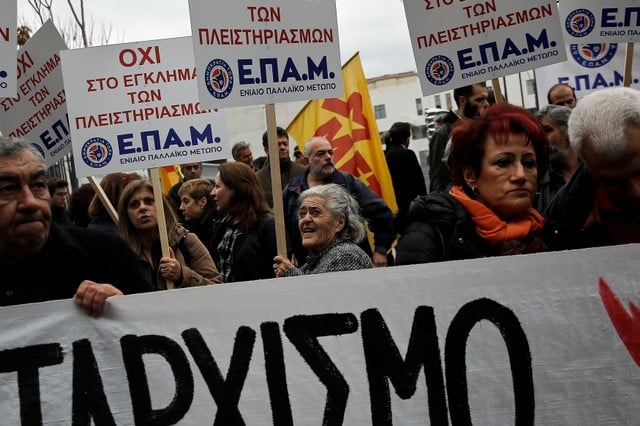 Greek subway workers, dockers and state-employed doctors plan to strike on Friday in the country’s first major industrial action of 2018, to protest a new law that will restrict their right to walk off the job.

Parliament is expected on Jan 15 to vote through the contentious reform, which would tighten rules on declaring work stoppages, a condition set by creditors who have loaned Greece billions since 2010.

At present, Greek unions can call strikes with the support of one third of their members. The new law would raise that requirement to 50 per cent, which creditors hope would limit the frequency of strikes and improve productivity that lags about 20 per cent behind the EU average, according to OECD data.

Strikes are so common in Greece that there is a website dedicated to them.

Friday’s stoppage is being backed by several unions, including GSEE, the largest private-sector one.

“It is essentially scrapping the only weapon workers have left to protect themselves, particularly after collective working agreements were shelved,” said GSEE spokesman Dimitris Karageorgopoulos.

“Every time there is labour action in public transport it shuts businesses down, adding to already slow business,” he said.

A majority of lawmakers are expected to vote in favour of the bill, which will be a bitter pill to swallow for a government dominated by the leftist Syriza movement.

With its roots in labour activism, the party swept to power in 2015 promising to end austerity, only to accept another bailout months later.

Greece needs to pass the regulation and a raft of other measures for lenders to sign off on a review of progress in its bailout programme, which the country hopes to exit this summer.

Monday’s parliamentary bill also seeks to introduce electronic auctions that could facilitate foreclosures to wrestle down a mountain of toxic debts weighing on the country’s banks, rationalise spending on state benefits, set targets for selling off assets of power utility PPC, and regulations on the operation of casinos.

One union leader said that, regardless of new legislation, workers would continue to strike.

“If they don’t like it let them fire us… or arrest us,” said Spyros Revithis, head of a public transport workers’ union that staged 15 strikes in 2017.

“This government is a Trojan Horse of neo-liberalism on labour rights.”