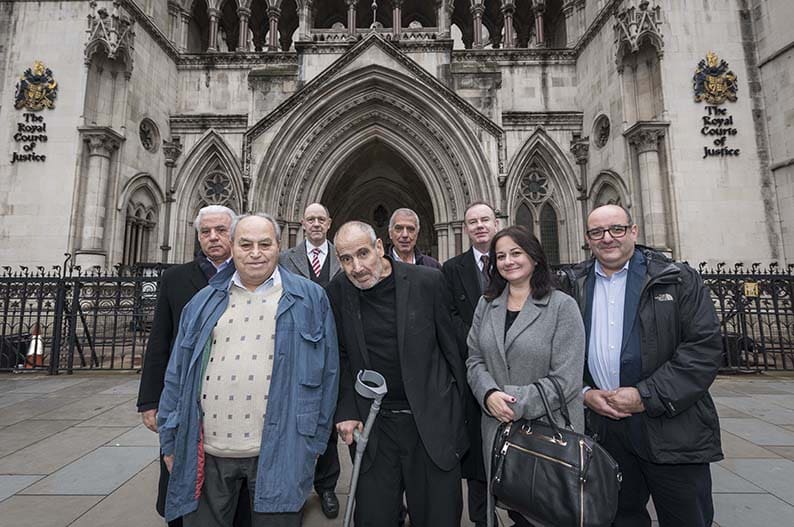 Solicitors and claimants' families and friends after the judgement..

The UK’s Royal Courts of Justice on Friday rejected an attempt by the British government to try under Cypriot law a historical torture and abuse case brought against it by former Eoka fighters.

The thirty-four elderly Greek Cypriots described the decision as the first battle in their claims regarding events that took place during Cyprus’ anti-colonial struggle between 1955 and 1959.

The British government had, in a preliminary hearing in November, presented what was described by the plaintiffs lawyers as ‘an obscure piece of international private law known as double actionability’.

That meant they wanted to try the case under Cypriot law as opposed to UK law, which has more discretion when it comes to limitations.

The Greek Cypriots – all elderly Eoka veterans – filed their claim in mid-2015 after Foreign Office documents released in July 2012 described claims of torture and abuse during the 1955-1959 Eoka insurgency.

They allege they were abused and tortured by British soldiers and security services whilst held in custody when they were juveniles. They were considered terrorists by the British Government for their involvement with Eoka.

“A state stands to be held to account for acts of violence against its citizens, it should be held to account, in its own courts, by its own law and should not escape liability by reference to a colonial law it has itself made,” said Justice Kerr of the Queen’s Bench Division, reading out his decision.

He added that Cyprus between 1955 and 1959 ‘did not exist as a state at all’ and the counter-insurgency efforts of the UK during the time were directed from London.

“If these were standard personal injury claims alleging negligence, I would be inclined to view Cypriot law as adequate and appropriate to deal with them,” he said.

“This is not an ordinary case; the defendants are not private persons or entities; they represent the government of the UK, which is said to be responsible for and indeed complicit in, as well as responsible for failing to prevent, unlawful acts of violence committed against citizens of one of its colonies, in that colony,” Kerr added.

“This is a significant victory for the claimants in this case, who have been fighting for recognition of the torture and human rights abuses committed against them nearly 60 years ago,” said Kevin Conroy, solicitor for the claimants

He described Friday’s decision as winning the first battle against the British government, which has until April 11 to submit a defence.

“I have no doubt in my mind that the British Government brought this preliminary issue up as a deliberate attempt to frustrate the claimants from receiving justice. These are people who were juveniles at the time, but are now in their eighties,” Conroy said.

“Many of them still suffer daily from the physical and psychological injuries inflicted on them at the time. Three of the claimants have died in the process of bringing this case to the stage it is at now, while others are no longer fit to bring a claim themselves.”

“Our father was tortured by two British Army captains, who were court-marshalled and sacked for their behaviour,” said two children of one of the claimants.

“He is no longer well enough to attend court himself, but remembers vividly the awful things that happened to him. We look forward to being able to telling him the outcome of today’s judgment as we’re sure he will be overjoyed.”

‘Thanks, but no thanks’: Norwegians reject Trump’s offer