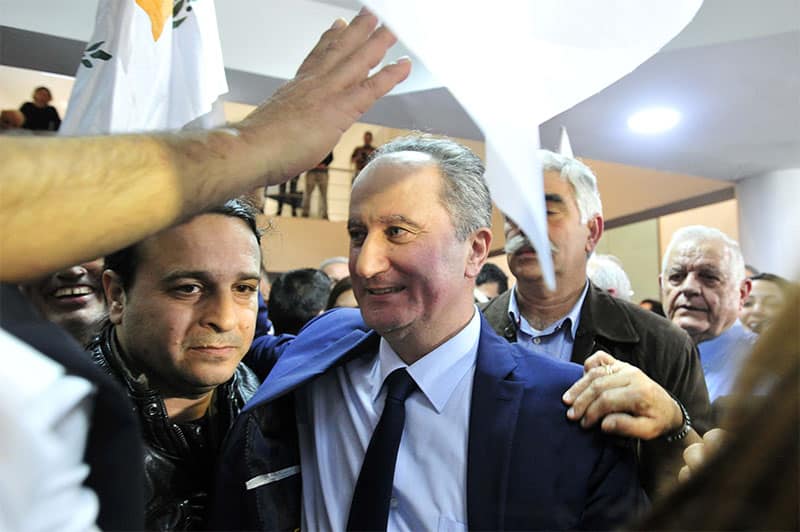 Akel-backed independent candidate Stavros Malas is expected to announce on Wednesday the person he will appoint as finance minister, as various names were being bandied about in the press.

It would be the first time a presidential candidate names his prospective finance minister prior to being elected to office.

Malas is expected to tap the person to head the finance ministry on Wednesday during the course of a televised debate with his opponent in the runoff ballot, incumbent President Nicos Anastasiades.

The 50-year-old Malas has promised that his finance minister will not hail from Akel. The move is seen as a bid by Malas and Akel to assuage voters – particularly those not affiliated to Akel – that the economic policies of the Christofias administration will not be repeated.

Akel were on Tuesday keeping their cards close to their chest, with party leader Andros Kyprianou saying only that no choice had been made yet.

He reiterated that Malas’ cabinet at large would not feature ‘frontline’ members of Akel.

Several names were meanwhile circulating including University of Cyprus economics professor Stavros  Zenios and Christis Kasapis, also a professor at the same university.

Another possibility put forward by media was businessman Mike Spanos, who at one point during the election campaign had been sounded out by Akel to be their candidate.

However, speaking to daily Politis on Tuesday, Spanos made it clear he was not interested in the job.

Neither had he been approached by Akel, he added.

In what is anticipated to be a close race on Sunday, Malas is hoping to entice voters – including the significant pool of the undecided – who might otherwise have concerns that his term in office might consist of a redux of the 2008-2013 Christofias administration.

“Certainly there’s a broad perception among the public that the Christofias government was a failure on the economic front,” said Yiannos Katsourides, director of the Prometheus Research Institute.

According to the analyst, Malas has indicated that if elected he will be pursuing a mixed economic model – where the state maintains a role in the economy but at the same time is business-friendly.

“He is keen to drive home the message that he is not held down by the baggage of the past. But whether his choice of finance minister will sway voters remains to be seen,” Katsourides told the Cyprus Mail.

Sources close to Malas’ campaign insisted the candidate was sincere about making a clean break on the economy front.

But they also suggested that some inside Akel were having second thoughts about announcing the finance minister at this time.

“It might not happen this week after all,” the same sources said.

Our View: Will there be a government without Diko’s toxic input?