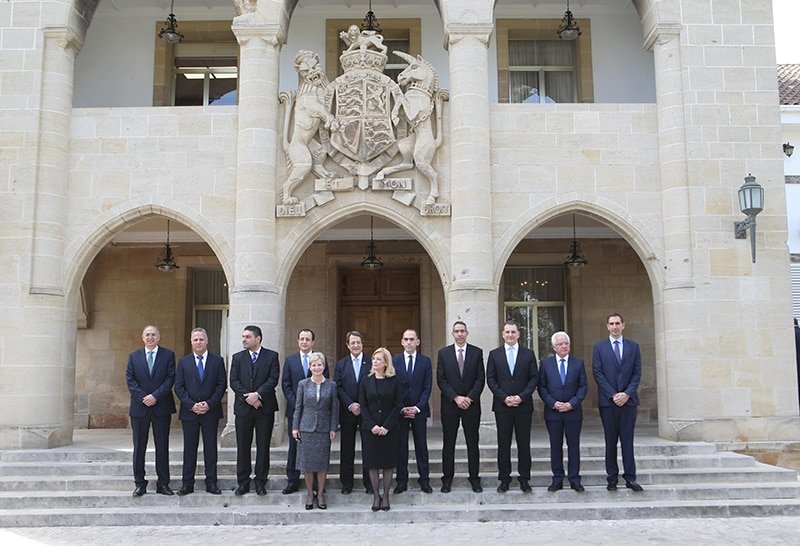 The new council of ministers was sworn in at the presidential palace on Thursday morning, along with other officials appointed by President Nicos Anastasiades after his re-election last month.

The ceremony, which started at 9am, took place in the presence of state officials, family members of the new ministers and government officials.

In a speech, Anastasiades said the basic criteria for his choices were professionalism, scientific training, credibility, ethos, and the will of the ministers to provide their services to the country.

“I expect to have the widest possible co-operation with all the political forces, regardless of political or ideological positions, the same co-operation I expect from organised social groups and trade unions in order to meet the expectations of the people,” he said.

Following the swearing-in ceremony, the members of the new cabinet, including the government spokesman and the head of the president’s office, signed a ‘code of ethics’ – a document by which they pledge to act with transparency, without bias and always in the general interest.

The members of the government undertake not to use their office to promote their own personal interest, and likewise to avoid any actions that may be perceived as abusing their office for personal self-interest.

Further, they are prohibited from acting in any way ‘that may be perceived as favouritism or special treatment’.

They must also ‘dedicate their entire time to their duties. Therefore, they ought to resign positions which they may hold in organisations, including non-profit organisations’.

Moreover, they must not accept any invitations to be hosted in their personal capacity by a foreign government or by natural or legal persons whose activity is related to their ministry.

According to the document, anyone officially violating the code ‘must immediately tender their resignation to the President of the Republic’.

Still, it was unclear whether this was the first time a ministerial code of conduct was being implemented in Cyprus.

The proposal had featured in the election programme of Anastasiades in 2013 ahead of the presidential elections that year.

The Cyprus Mail contacted members of the first Anastasiades administration (2013-2018) asking whether they had previously signed a code of ethics.

Some said they did, while others were unsure.

For his part, Foreign Minister Nicos Christodoulides said the ministers were fully aware of the responsibility and the expectations and they would do their utmost to complete the great work that began five years ago.

Christodoulides was government spokesman in the previous cabinet.

“We will do our best, displaying the ethos required to fully fulfil our duties under your guidance and supervision,” he said,

A lot of hard work is expected from the new ministers, he added, stressing that there was no room for party politics, discrimination, and amateurism, only work towards the best interest of the Cypriot people.

After the ceremony, Anastasiades and the new ministers laid a wreath at the statue of Makarios III in the courtyard of the presidential palace.

The first ministerial council meeting was set to get underway as soon as the ceremonies were over.

The new faces in the cabinet are lawyer Savvas Angelides, defence minister, teacher and education ministry official Costas Hambiaouris as education minister, businessman Constantinos Ioannou at the health ministry, and Vasiliki Anastasiadou at the transport ministry.

Harris Georgiades continues at the finance ministry, as do Zeta Emilianidou at the labour ministry, and Giorgos Lakkotrypis at energy ministry.

Education minister Costas Kadis moved to the agricultural ministry and Constantinos Petrides remains at the interior ministry. Ionas Nicolaou will also stay at the justice ministry.

Political scientist and member of the Disy executive bureau, Petros Demetriou, is the new head of the president’s office.

Main opposition party Akel wished the new administration success, but added it was not optimistic given the Anastasiades government’s track record so far.

“It is our hope that this time around those who benefit from this administration will not be just their select, few friends,” Akel said in a statement.

“We hope, too, that the code of ethics will not be left by the wayside.”

‘Beast from the east’ forces Genève Aéroport shut down

The Philosophy of Dining at Nicosia Mall