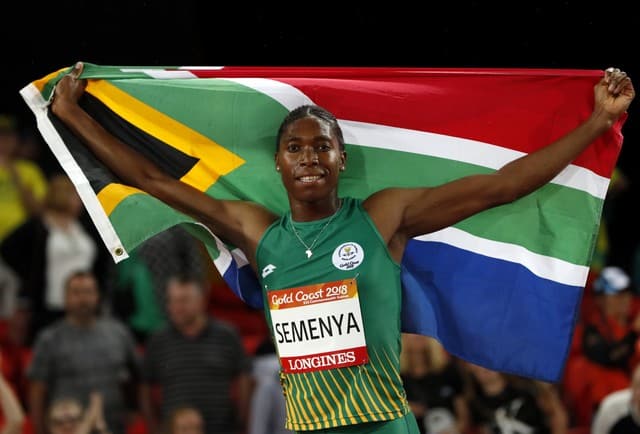 South African flag-bearer Caster Semenya powered to the 1,500 metres title at the Commonwealth Games on Tuesday, keeping her bid for a golden double at the Gold Coast intact.

The 800m Olympic and world champion bided her time before burning away from the modest field to post a Games record time of four minutes and 0.72 seconds on a soggy track at Carrara Stadium.

Semenya, who will run for gold in the 800m, left Kenya’s silver medallist Beatrice Chepkoech (4:03:09) in her wake, with Wales’ Melissa Courtney taking the bronze.

Before arriving in Australia, Semenya promised to lead South Africa by example. She now hopes her commanding win will inspire her team mates.

“Basically I’m more like a captain so I need to show the guys that I’m a woman of my words,” the 27-year-old told reporters after an evening session punctured by rain showers.

“If I say I will do something I will do it. Also it’s just to motivate them so they can believe in themselves.

“With 10 years of experience for me now I think I’m ready for anything.”

Another African nation, Botswana, also denied Jamaica in the men’s 400m as the flamboyant Isaac Makwala blitzed the field with a quality time of 44.35 seconds.

He dropped to the track and did some trademark push-ups while his rivals stood around panting.

The 31-year-old was controversially barred from competing in the 400 final at last year’s world championships in London over illness fears, so the Commonwealth gold was some consolation for that disappointment.

“Disappointment is disappointment (in) 2017, now we are focused again on the 2018, so we forgot about what happened in 2017,” said Makwala, whose path to gold was smoothed by the absence of South Africa’s Olympic champion Wayde van Niekerk.

Blake’s stumbling effort for a disappointing bronze put a dampener on the Jamaican team on Monday, but the athletics powerhouse hit back with golds in the 110 metres hurdles and the triple jump.

Jamaica’s Kimberly Williams also led a one-two for the nation in the triple jump, leaping 14.64 metres on her final effort to pip her team mate Shanieka Ricketts by 12cm. Thea Lafond took the bronze for Dominica.

Olympic champion Elaine Thompson won her heat to qualify fifth fastest for the 200 metres semi-finals. Her team mate Rasheed Dwyer, the defending champion, was also safely through to the men’s semis.

Canadian Warner, the Rio Olympic bronze medallist, held the lead before the vault but crashed out of medal contention after he failed to clear a height.