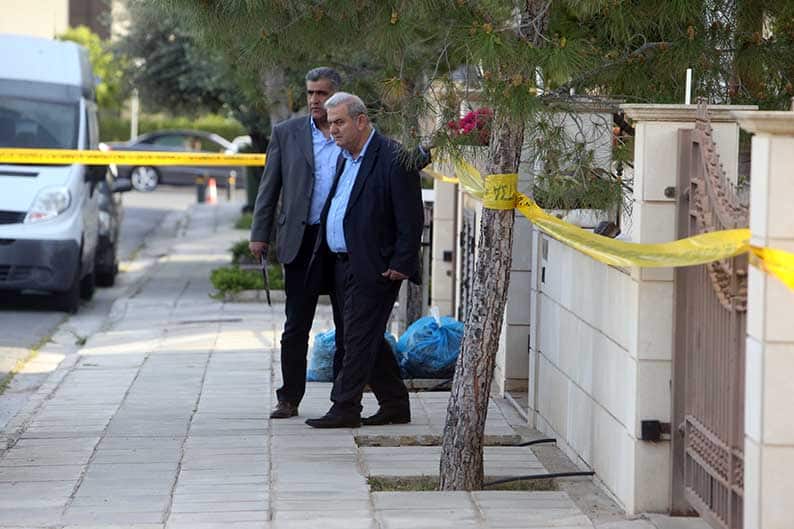 Police on Wednesday arrested a 33-year-old man in connection with the double murder of a teacher and his wife in Nicosia last week.

Spokesman Andreas Angelides said later that the man was from Nicosia and he was being interviewed.

Police did not provide any more details about the man’s identity but it emerged that he is a Greek Cypriot known to authorities in connection with burglary and drugs cases.

Police have evidence that puts the suspect near the scene of the crime on Zalongos Street in Strovolos.

Earlier, police said they had reinforced the investigating team with more officers and results should be expected soon.

According to Michaelides, there are now 12 to 15 police investigators on the case.

He said there was no such thing as a perfect crime and he was optimistic the case would be resolved.

The case had been further complicated by the lack of obvious evidence and that the murder weapon has not been found, he said.

Reports circulating on Wednesday that an item of clothing with blood on it had been found were not confirmed by Michaelides who said he could not comment.

“You realise these are important issues, evidence, for which we can make no reference to,” he said.

Last Thursday, English School maths teacher Giorgos Hadjigeorgiou, 60, and his 59-year-old wife, Dina Sergiou, who worked for the central bank, were brutally murdered in their home.

Hadjigeorgiou was stabbed between 25 to 30 times and his wife, 10 times. They both had one defensive wound each on their right arms, a post-mortem revealed.

The couple’s 15-year-old adopted son, the sole witness to the crime, had claimed two hooded perpetrators had forced entry into the house and told him they would not harm him. The boy managed to flee, running to a neighbouring house.

Police said last week they found no sign of forced entry or robbery.

The legal service and police decided earlier this week that the 15-year-old would be questioned but at a later time, which has not been specified.

Michaelides said the force would be in touch with “specialists from abroad as well as health ministry representatives, pathologists, psychologists, child psychologists and forensic psychologists, with the aim to fully resolve the case”.

“We are doing well, the course of interviews is very good and we believe we will soon have good results.”

Commenting on the fact that a lot of time has elapsed, Michaelides said the first few hours were crucial “but things are already beginning to be on the right path but we are optimistic this case will be solved.”

Speaking on the sidelines of counter-terrorism exercise in Limassol, he called on the public not to criticise the police force, which he said knew what it was doing but was limited with how much they could say publicly.

Earlier in the day, deputy police spokesman Stelios Stylianou remained tight-lipped as to whether phone data and bank accounts were being looked into, saying more would be announced if it was deemed necessary.

The deputy spokesman also defended the decision to brief Attorney-General Costas Clerides on the progress of the case during a meeting at the legal service earlier this week.

Speaking to Cybc he said it made sense to seek their opinion on some cases when it is deemed necessary.

Nonetheless, former deputy police chief Sotiris Charalambous said during a live Cybc radio broadcast it was unacceptable that the AG was involved with the procedure.

Police should not seek guidance from the AG who is not an investigator, he maintained, blaming police for looking to him for direction.

Justice Minister Ionas Nicolaou, asked to comment on the case, said the less it was talked about the better it would be.

Friends or not, Macron challenges Trump in Congress speech