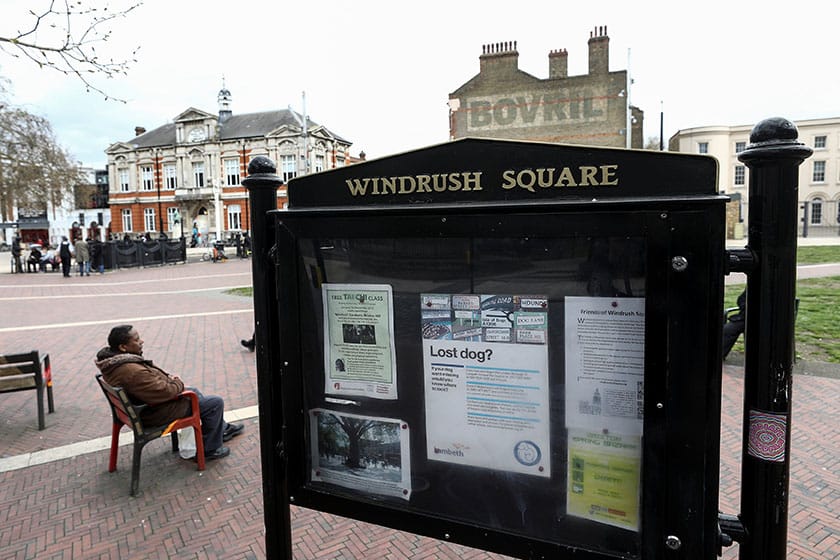 A man sits on a bench next to a sign on Windrush Square in the Brixton district of London, Britain April 16, 2018. REUTERS/Simon Dawson

As she sailed from Jamaica in 1948 with the first wave of Commonwealth immigrants the Empire Windrush began an epic journey of her own. A journey that changed Britain to the point that made it possible in 2018 for BBC TV, even if controversially, to cast a black actor as the demigod Achilles in the series Troy: Fall of a City.

Under the 1971 Act only those with the right of abode ‘are free to live in and to come and go into and from the UK without let or hindrance except as may be required for their right to be established’.

So it was not true that Commonwealth immigration happened behind the backs of the British people, implied by Enoch Powell in his ‘rivers of blood’ speech in 1968. Besides, many in the British establishment had not forgotten that when Britain stood alone in Europe as the Nazis were at the gate poised to invade, the British Empire helped resist and ultimately defeat the Nazis. From the colonies across the seven seas, including Cyprus, young men joined up and fought and died for Britain in many theatres of war.

The late president of Cyprus, Glafcos Clerides, fought with the RAF and was mentioned in dispatches. Indian Sikhs fought like lions – Sikh means lion in Sanskrit. A contingent was even stationed in Cyprus before being posted to North Africa and Italy. Apparently, they looked fantastic in uniform – their fine features much enhanced by their turbans and long beards. Years later a 90-year-old friend of my late mother confessed that she still felt the pangs of unrequited love for a certain Sikh officer.

West Indians fought in the war too, mostly with the RAF. But they did not just fight; a large number returned to live in Britain. Indeed, many passengers on the Windrush were ex-servicemen and their families who were returning owing to wartime nostalgia as well as to help in the reconstruction of Britain. As there was no immigration control their arrival and stay in the UK was unimpeded and consequently not well documented.

Fast forward to EU enlargement in 2004 and freedom of movement from East Europe, and wave after wave of refugee arrivals from the world’s trouble spots, and the steady stream of immigration from the Commonwealth, and one can see how immigration reached saturation point.

The Windrush scandal that has engulfed Theresa May’s government is the byproduct of the reaction to this saturation. Although the so called hostile environment created by the Immigration Act 2014 – passed when she was home secretary – is ostensibly directed at illegal immigration, politically it is also of a piece with Brexit and Trump and the rise of populism across Europe and America.

This was the political context in which the government chose to ignore warnings that its official policy of creating a hostile environment directed at illegal immigrants would cause serious collateral damage to well established lawful residents who had lived in the UK for most of their lives. May was told that the policy would be particularly pernicious in sections of the Caribbean community. She must have known that they were not able to protect themselves against the wiles of hostile officials egged on by a heartless government in a numbers reduction game.

To put it bluntly, the suspicion is that as home secretary she was prepared to pass populist laws to curry favour with the anti-immigrant sentiment in order to stem the rise of UKIP that was unashamedly anti-immigrant and anti-EU. She did this with the knowledge that it would cause collateral damage to lawful residents precisely because the resentment she was feeding was against immigrants whether lawfully in the UK or not.

May seems a safe pair of hands as prime minister but she went completely native when she was at the Home Office, even to the point of campaigning to repeal the Human Rights Act 1998. This is in contrast to Amber Rudd who is obviously a compassionate home secretary and is genuinely angry that this happened on her watch when the fault is Theresa May’s.

Immigration control means that you need permission to enter and remain in the UK and are liable to deportation if you commit a criminal offence or if your presence is not conducive to the public good.

Commonwealth citizens are British subjects but they are not British citizens. Those that settled in the UK before 1973 acquired rights and privileges on account of their umbrella nationality. They have the right to vote in national elections, the right to work in government service and protection of their settled immigration status including exemption from deportation.

Everyone settled in the UK on or before 1973 was deemed to have indefinite leave to remain in the UK by operation of the law without having to prove their settled status – their presence in the UK was not necessarily known to the authorities as there is no system of identity cards in Britain.

If you needed to travel, however, it was advisable to regularise your stay by getting a British passport or indefinite leave to remain (ILR) endorsed on your passport to preserve your right to come back as a returning resident.

Many West Indian immigrants did not travel and therefore did not regularise their stay as they had no need to do so. Until, that is, the coming into force of the Immigration Act 2014 when their settled status was questioned internally – at work, by their GPs, the NHS and the Department of Work and Pensions among others.

The problem thrown up by the Windrush scandal is that under the Immigration Act 2014 immigration control has been extended to internal control whereby persons who are not British or EU citizens are required to prove they are lawfully in the UK and entitled to live, work, study, seek medical treatment or open a bank account.

This has, infelicitously, been termed a hostile environment devised to target illegal immigration. In my experience, illegal immigrants gravitate to the black economy and immigrant-friendly environments among established communities where they can live and work undetected. The irony of the Windrush scandal is that the West Indian community is the least involved in sheltering illegal immigrants.

Collateral damage is a term borrowed from the recent wars in Iraq and Afghanistan. Every time civilians in large numbers in hospitals and schools are killed it is claimed by the West that it was either in error or as a result of collateral damage – in contrast to terrorists who deliberately target civilians.

It is the same with government policy contained in enacted law. If it is known that a particular law harms innocent individuals in the process of targeting wrongdoers it is a bad law that need not be followed: it has been the case since the time of Antigone that we do not have to obey bad laws!

Egypt preparing for a gas-rich future

Our View: Waste management fiasco could have been avoided