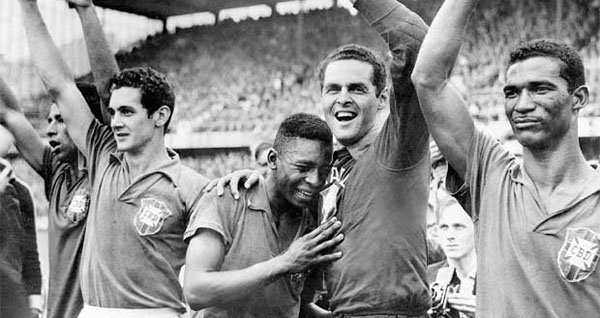 Pele,(c) cannot hide his emotions after becoming a World Champion at the age of 17

The 1958 World Cup received international television coverage for the first time, with the tournament notable in seeing the emergence of Brazilian legend Pele at the age of 17 years 249 days.

In yet another change to the format, the 16 teams were split into four groups as in 1954, but all the teams in the group played one other.

If teams tied for second and third place, the outcome was decided via a playoff. Extra-time was not played in pool matches this time around.

The tournament also saw the first goalless draw in World Cup history between England and Brazil, prompting the Selecao to bring the 17-year-old Pele into the team.

He scored his first ever World Cup goal when Brazil beat Wales.

England’s chances were severely affected by the Munich air crash in February, which deprived the Three Lions of several star Manchester United players who were killed in the disaster.

The tournament also saw French forward Just Fontaine set the record for most goals scored in a single edition of the World Cup, with 13 in six matches. The record still stands today.

The tournament, on the whole, had a low-key atmosphere, with the clash between Wales and Hungary in Stockholm having an attendance of only 2,823. It may be hard to envisage now, but the scale, atmosphere and general feel of Sweden 1958 was particularly understated.

Brazil came into the tournament with a great deal of expectation behind them.

They had played in all five previous World Cups but had never lifted the famous trophy.

The 1950 final defeat at home to Uruguay was still ingrained in the nation’s collective conscience. Eight years had passed, but the disappointment had been impossible to shake off. Everyone knew the story and its significance resonated far beyond the realm of football.

Millions around the world tuned in to watch what was the first World Cup final to be broadcast live on television.

Sweden took the lead after four minutes through captain Nils Liedholm. The lead didn’t last long though as Vava equalised five minutes later. Vava scored again just after the half-hour mark to give Brazil a 2–1 lead at the interval.

Pele took over in the second half, scoring one of the great World Cup goals to increase the Selecao’s advantage, before future World Cup-winning manager Mario Zagallo made the score the score 4-1 in the 58th minute.

Sweden pulled a goal back ten minutes from time, but Pele sealed a famous 5-2 win in the 90th minute with his second of the game.

The final still holds the record for youngest and oldest goal-scorers in World Cup finals to this day, Pele being the youngest (17 years and 249 days) and Sweden’s Liedholm the oldest at 35 years.

Brazil’s victory is the only time that a non-European country has won the World Cup in Europe.

Brazil could finally call themselves world champions and a long relationship with the Jules Rimet trophy had begun.