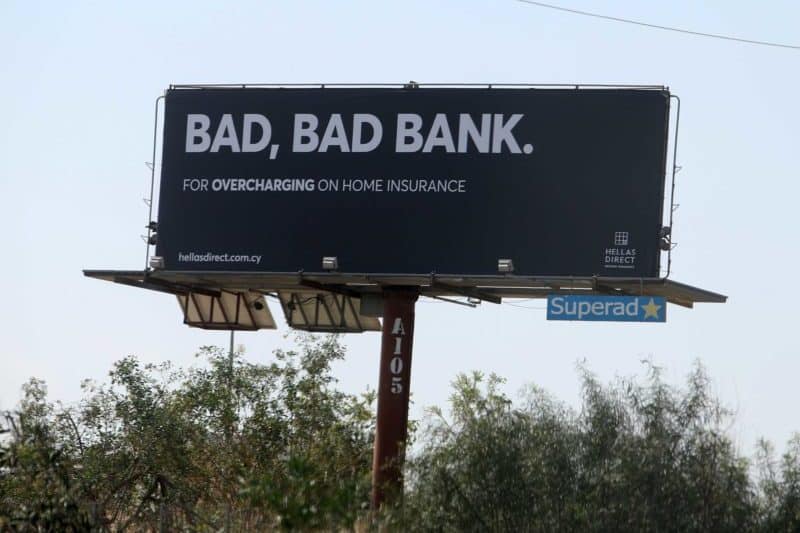 The company already launched an advertising campaign in which it criticises banks for overcharging on home insurance (Photo: Christos Theodorides)

Hellas Direct, a digital-based insurance firm which was successful in “disrupting” the Greek market amid the crisis years, wants to do the same in Cyprus by snatching a share of up to one tenth of the total market by launching its home insurance product, the company said.

“Hellas Direct is already one of the largest car insurance companies in Cyprus, with more than 150,000 transactions over the last twelve months and having settled more than 30,000 claims since its launch five years ago,” the company said in an emailed statement. “Hellas Direct’s home-insurance offering introduces a wide range of innovations into the market, such as the ability to buy insurance by the day, instant claims settlement and the payback of micro-payments on a daily basis to consumers who have not had a claim”.

The company, which grew exponentially during its first four years of operation in Greece, at a time when the southern Balkan country saw its economic output contract by one fourth resulting to an overall reduction in insurance premia of 40 per cent, “has teamed up with Swiss Re, one of the world’s leading reinsurers, and Revolut, Europe’s fastest-growing digital banking alternative, to enter the Cyprus home-insurance sector,” it said in an emailed statement. “The partnership will deliver a highly-innovative and customer-focused home-insurance experience for Cyprus-based policyholders”.

The Cypriot insurance market which was also affected by the twin fiscal and financial crisis five years ago. According to the latest available data on the website of the Insurance Companies Control Service which supervises the market, total life and non-life premia rose in 2015 0.7 per cent to €704.3m after falling 3.9 per cent the year before. Two years ago, a new regulatory framework based on the European directive Solvency II was past into law which provides for stricter capital and liquidity standards.

“We already employ a fantastic team of technologists, data scientists and finance specialists at our Nicosia office and a big part of our innovation is being born here,” Markou said adding that launching the company’s operations in Cyprus, “is a bit of a homecoming”.

His partner Pantazis said that while launching the company’s products on the island is “of particular sentimental importance,” the move may allow regional expansion in the future.

The company plans joint research and development operations with Swiss Re and Revolut, in an attempt “to further challenge traditional operational models in the broader region,” it said.

The company already launched an advertising campaign in which it criticises banks for overcharging on home insurance.

Cockfight photos from north cause stir on social media