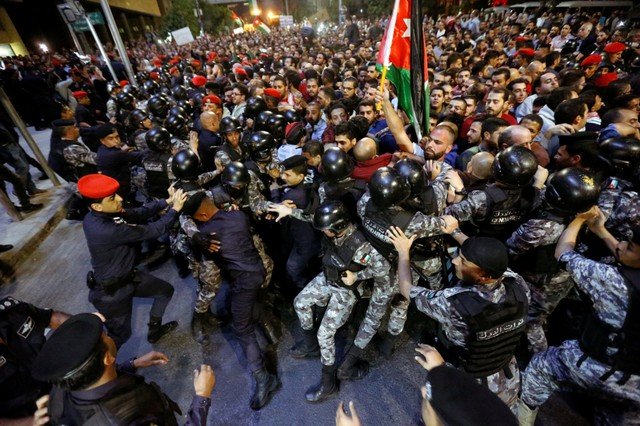 Policemen clash with protesters near the Jordan's Prime Minister's office in Amman, Jordan

The move appeared aimed at defusing popular anger over planned tax hikes that have brought thousands of people onto the streets in the capital Amman and other parts of Jordan since last week. Razzaz was education minister in Mulki’s government.

Jordan, a staunch US ally that has a peace treaty with Israel, has remained stable through years of regional turmoil.

Police chief Major General Fadel al-Hamoud said security forces had detained 60 people for breaking the law during the protests and 42 security force members had been injured, but protests remained under control.

“Rest assured, Jordan is a safe and secure country, and things are under control,” said Major General Hussein Hawatmeh, head of the Gendarmerie security department, appearing along with Hamoud at a news conference.

Public anger has grown over government policies since a steep general sales tax hike earlier this year and the abolition of bread subsidies, both measures driven by the International Monetary Fund.

Political sources earlier said Abdullah had summoned Mulki for an audience in the king’s palace.

In a sign the tax hikes could be shelved, the Petra news agency, citing the speaker of parliament, said lawmakers were on course to ask the king’s permission to hold an exceptional session, with a majority demanding the changes be withdrawn.

Mulki, a business-friendly politician, was appointed in May 2016 and given the responsibility of reviving a sluggish economy and business sentiment hit by regional turmoil. The tax increases have caused his popularity to plummet.

The protests widened on Saturday after Mulki refused to scrap a bill increasing personal and corporate taxes, saying it was up to parliament to decide.

Demonstrators who have converged near the Cabinet office have said they would disband only if the government rescinded the tax bill it sent to parliament last month.

Unions representing tens of thousands of employees in both the public and private sectors have also called for a general strike on Wednesday after their demands for the bill to be scrapped were rejected by the government.

The government says it needs more funds for public services and argues that the tax changes reduce social disparities by placing a heavier burden on high earners. Opponents say a tough IMF-imposed fiscal consolidation plan has worsened the plight of poorer Jordanians and squeezed the middle class.

Jordan‘s economy has struggled to grow in the past few years in the face of chronic deficits, as private foreign capital and aid flows have declined.

Many women with early-stage breast cancer can skip chemo – study