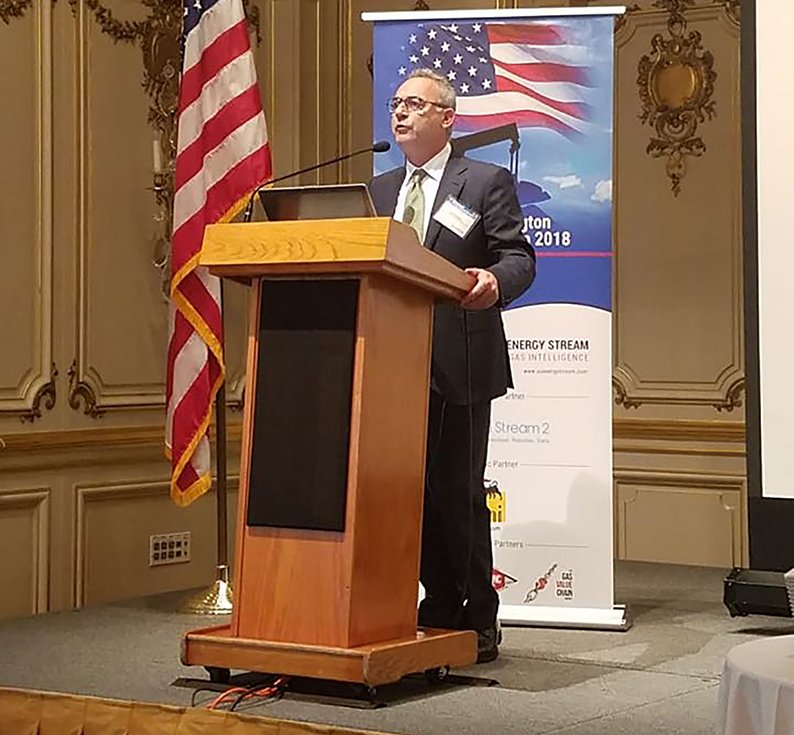 The US and Cyprus have entered a new level of relations in the field of energy, especially after the third licensing round with ExxonMobil signing an exploration and production sharing contract for block 10 of the island’s EEZ, Disy leader Averof Neophytou said

Neophytou was speaking at the 4th Washington Oil & Gas Forum 2018.
He said the fact that ExxonMobil expanded its international upstream footprint into the Eastern Mediterranean region for the first time underlined the strategic importance of its presence in Cyprus’ EEZ.  The US giant is due to begin exploratory drilling in block 10 in the Autumn.

“The presence of industry heavy weights like ENI and TOTAL also underline the importance of the region. A potential that essentially opened with Noble and Delek,” Neophytou said.

The Disy leader said the Eastern Mediterranean energy potential opened up investment opportunities in the region, creating conditions for potential wider convergences.
“The energy resources can in their totality cover the regional energy needs. Moreover, the region’s potential to become a future gas supplier to both Europe and Asia, given its strategic location near the European market and the Suez Canal, is a valid one,” said Neophytou.
He said the Eastern Mediterranean was expected to attract even stronger interest from international oil and gas companies over the next decade. Developments were telling of the increased interest after Zohr particularly, he said

“Drillings have verified the geological model of a Zohr-like structure in Cyprus’ EEZ which strengthens the potential of the region. This allows us to be optimistic for the prospects of our hydrocarbon resources. A fact also highlighted by the results of the first licensing round of Lebanon,” he added.
“Importantly, the prospects that further economic cooperation in the region will bring, can be of paramount importance. It is a fact that energy resources around the world have either been a source of cooperation, economic growth and investment. Or a source of conflict, instability and uncertainty.”

Neophytou said Cyprus was determined to use its natural gas deposits as a source of regional economic cooperation, development and integration. “In fact, the important gas resources can further enhance the relations of the United States and Cyprus and the region,” he said.
Exploitation and monetisation of the overall energy potential would require billion-dollar investments in energy infrastructure projects. Security and stability, he said were important factors to attracting and realising investments, especially in a troubled region like the Eastern Mediterranean.

“At the same time, regional geopolitical challenges are a fact. If you look at the map of the region the serious geostrategic challenges are very evident. These developments increase the need for a stability pillar in the region,” he added.
While Cyprus appears to be geographically a small pin on the map in the Eastern Mediterranean, and seemingly unimportant, it could play an important role in de-risking energy exploitation in the region and become a reliable and credible pillar of political, energy and economic cooperation.

Cyprus was the prudent location for critical infrastructure, Neophytou said.

“In my personal opinion, when a comprehensive settlement of the Cyprus problem is reached, I would not exclude the option of a pipeline for selling natural gas to Turkey at commercial terms. In a post-solution era, Cyprus relations with Turkey will change, opening opportunities for further cooperation,” he added.

“The European Union and the US have maintained a principled position of support to the sovereign rights of Cyprus to explore and exploit its natural resources,” he added.

Cyprus was continuing its energy programme as further natural gas discoveries would bring it closer to its strategic priority of building a liquefaction plant.
“Cyprus maintains excellent relations with all its neighbours, including Lebanon, Israel, Egypt, Jordan and Greece, with the exception of Turkey, and puts great effort in enriching cooperation in the region. Such links are strengthened by the high-level trilateral meetings held so far between Cyprus, Egypt and Greece, furthering economic cooperation and solidifying our three-way emerging political alliances,” he added. “The geopolitical changes around us are indeed a potential security catalyst. Challenges aside, the estimated economic benefits provide substantial incentives for regional cooperation in the field of energy that could be a win-win situation for all parties involved.”