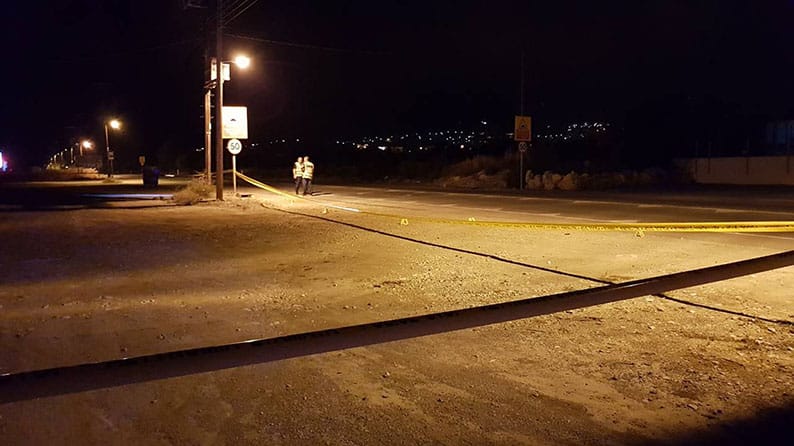 The scene of the crime (Photo: CNA)

A 35-year-old man and a 23-year-old woman were arrested on Sunday and remanded for eight days after a British tourist, 39 was killed and another, aged 32, was injured in a hit-and-run on the Peyia-Ayios Georghios road in Paphos in the early hours.

The pair is facing charges of premeditated murder and attempted murder. They were brought before the Paphos district court and remanded for eight days.

Police were alerted to an accident at 3am when someone reported two people lying on the road.  The two British tourists were taken to Paphos hospital where the 39-year-old man was pronounced dead on arrival and the second man was hospitalised but is out of danger.

From the evidence collected, it appears that prior to the hit-and-run there had been an altercation at a bar in Coral Bay during which the two Britons reportedly tried to defend the woman who was being hit by the 35-year-old suspect.

The couple then left the bar and drove off.

The car believed to have been involved in the hit-and-run was found abandoned at dawn at the Ayios Georghios harbour, CNA reported.  It was in the sea and had to be removed by the fire service.

Witnesses told police the man and woman were both in the water and that people had helped the woman out when she called for help. The man got out by himself. They both then left the area on foot but were picked up by police shortly afterwards.

The race on the runways