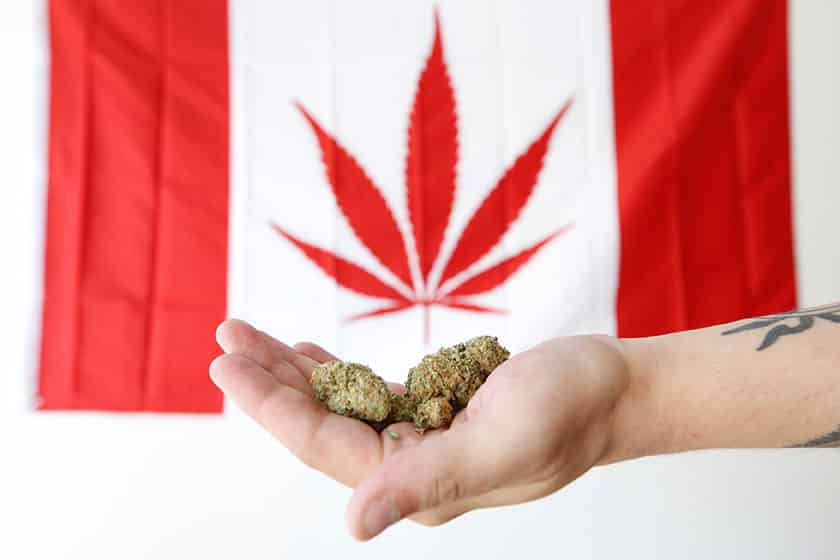 An employee holds marijuana in front of a modified Canadian flag with a marijuana leaf while posing in a photo illustration at a dispensary in Ottawa, Ontario, Canada, June 20, 2018. REUTERS/Chris Wattie

Canada’s upper house of parliament’s recent decision to legalise recreational cannabis has revived interest in the drug and re-ignited the debate about the wisdom of liberalising its use.

Cannabis is variously referred to as hemp, hashish (which comes from the resinous secretions of the cannabis plant and can be smoked or eaten), grass, ganja, pot, reefer, weed or marijuana (the dried leaves, flowers, stems and seeds of cannabis which can be smoked or used in food).

It is divided into two main types: cannabis sativa and cannabis indica. Both varieties are psychoactive. They contain two important chemical compounds: delta-9 tetrahydrocannabinol (THC) and cannabidiol (CBD). These are the substances responsible for cannabis’ bodily and neuropsychological effects. THC is the agent that produces undesirable psychoactive effects due to its toxicity. Lately, there has been a worrying increase in the illicit use of highly rich and potent THC resins extracted from cannabis (produced as hash oil, honey oil, wax or in more solid forms). When taken, these potent THC extracts can lead to serious bodily and neuropsychological adverse reactions or harm. In contrast, CBD does not have the intoxicating effects of THC. Rather, it is an anti-inflammatory, anticonvulsant, antioxidant and antipsychotic agent. Interestingly, due to these qualities, it is often deployed to counteract the intoxicating effects of THC.

With the rise of medicinal cannabis; its use for recreational purposes (legally or illegally); and, therefore, increasing demand, many hybrid varieties of cannabis (with high potency extracts) have been developed and are in circulation.

The worldwide use of cannabis is a real puzzle. It is extremely hard to identify any common patterns applicable to every country to reach a consistent understanding of the different approaches to cannabis and the laws pertaining to its medical and recreational use. And where such commonalities appear to exist, it is difficult to know how to evaluate the social and political parameters that define the purpose and scope of each country’s laws regarding its use.

In Europe, there is a confusing scene of contradictory and conflicting policies: a token or mini-policy of ‘decriminalisation’ of cannabis that applies in some instances; another hesitant policy for the limited legalisation of cannabis for medical purposes under defined restrictions; and an overall policy of continuing to define and classify cannabis as an illegal substance. Similarly, in the US, 28 states legally allow cannabis for personal medical use but under federal law, it remains illegal.

The legally prescribed use of cannabis for medical conditions is gradually gaining ground. The marketing of synthetic cannabinoid products such as dronabinol and nabilone by pharmaceutical companies has helped to promote the medical benefits of cannabis and gradually establish it as a legitimate approach to providing patient treatment and care. Such synthetic products with regulated quantities of THC or CBD or together in a balanced combination have successfully introduced new therapeutic means in controlling and relieving pain, nausea and sickness – as for instance in the treatment of cancer, multiple sclerosis and Aids patients. In general, medicinal cannabis is now administered for the relief of various and diverse conditions such as glaucoma, severe pain, nausea, muscle atrophy, muscle spasms and seizures. Just last month, a purified extract of CBD, marketed under the brand name of Epidiolex, was approved by US Food and Drug Administration (FDA) as an oral solution to help children aged two or over who suffer from Lennox-Gastaut and Dravet syndromes. These are associated with rare and severe forms of seizures.

Medicinal cannabis with high concentrations of CBD is shown to be effective in obsessive-compulsive disorders, post-traumatic stress, panic attacks and, due to its low toxicity, it affords and allows prolonged treatment against cancer. Also, more recently medicinal cannabis has been shown to assist in controlling the incidence of diabetes 2.

Cannabis taken in adolescence and followed in adulthood can have serious adverse effects. The most common harmful effects are dependence, cognitive changes (e.g. memory deficits) and altered states of consciousness (from hallucinations to feeling ‘high’, euphoric and uninhibited), distorted perceptions of time and space, impaired respiratory function, cardiovascular ailments and mental health problems. Of particular concern is that early use of cannabis of high potency THC and lifetime dependence may play a significant role in predisposing users to depression and suicide.

Long-term use of cannabis may cause lasting neuropsychological impairment but the claim that damage is irreversible is subject to challenge. The consistent finding is that impairment may remain long after abstinence. Consumption of large quantities of cannabis appears to trigger the onset of psychosis in people who otherwise appear in good mental health. With the onset of psychosis and the continued use of cannabis, users’ sociability and mood disturbance worsen and thus treatment becomes more complicated and difficult. These neuropsychological changes are explained in part by observations that dopamine neurotransmitters in the brain are altered by cannabis. Basically, the argument goes, cannabis increases dopamine concentrations in a similar fashion to that of heroin. Furthermore, it is found that the use of cannabis can trigger severe relapses in people who are already receiving treatment for schizophrenia.

Gender also comes into this equation. Men start taking cannabis at a younger age than women and proceed to long-term heavy dependence; and they have an earlier onset of neuropsychological disturbances. Once again, the adverse effects reported are dependent on the amount of the substance taken, its potency and the frequency of use.

Although the physiological effects of cannabis can appear soon after using cannabis, the psychological experiences are another matter. Taking cannabis and interpreting the effects in a psychological manner is a process. It requires the ‘novice’ to learn from other more experienced users how to attach meaning and experience to cannabis taking.  In other words, it is a learning process in association with others. The effects (‘good’ or ‘bad’) are subject to experience, personal expectations, the state of mood and the social context in which the drug is used.

In any discussion of cannabis, or any other drug for that matter, it is easy to adopt the part of a moral entrepreneur to preach others how to behave. Policy should be more about harm reduction than about prescription and engagement in moral principles. Allowing for other factors at play, if there is a relatively clear message that can be transmitted it is that the earlier in life a person starts taking cannabis; the higher the  potency of the substance; the higher the quantity consumed; and the longer the duration of use may determine whether cannabis leads to personal and social harm. It is, simply, a matter of doing things in moderation. But then, one needs to put cannabis and its harmful effects in perspective. In comparison to alcohol which is legal and freely available and alcohol dependence, the harmful effects of cannabis fade into insignificance. The most personally and socially harmful and most treated of addictive substances (barbiturates, crack, cocaine, heroin, cannabis and prescribed barbiturates or opiates in general) is alcohol.

The political and moral implication of this discrepancy in policy – treating substances differentially – is worth considering and reflecting on.

Lessons for Cyprus from the Bosnian conflict still resonate

The independence of the judiciary must be sacrosanct