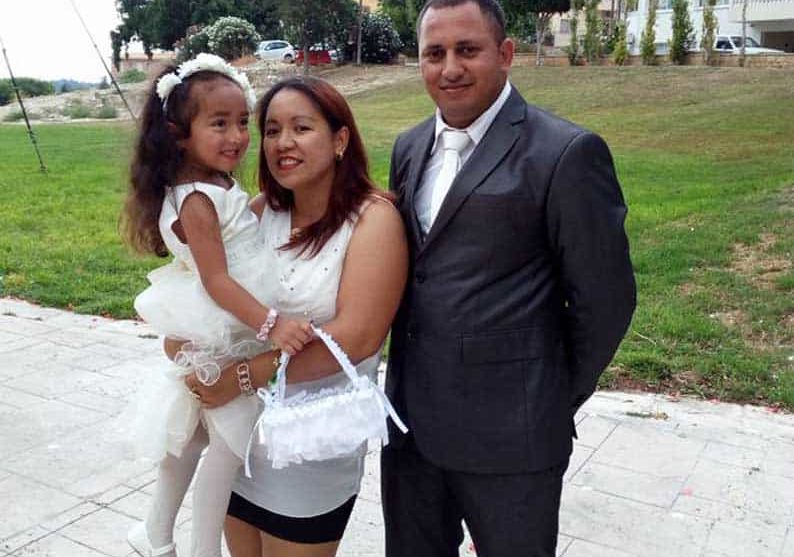 THE father of a baby who was treated in Israel in 2013 in a life-saving operation after the minister of health stepped in, has been arrested for a second time in Paphos, under circumstances which his lawyer called ‘shocking.’

John (Sanjeev) Dhull, 37, from India, was arrested in Paphos on Wednesday morning, when he visited immigration at their request to collect a letter, his lawyer told the Cyprus Mail on Thursday.

He is currently being held at Paphos central police station in a cell, and his family and friends have been unable to contact him.

“I don’t understand why the government reacted this way, it’s shocking. They know where he lives,” Nicosia-based lawyer, Maria Serghi Mirbagheri said of his arrest. She was only engaged by the couple last week, as they had been unable to contact their previous lawyer for some time.

Dhull’s wife, Virginia Tuguinay, is appealing to the minister of the interior, Costantinos Petrides, to intervene and release her husband, who was arrested pending an appeal to renew his visa.

The father of one, who currently has permission to work from the labour ministry until October 2018 and had secured a job as a chef at a Paphos restaurant, received a telephone call asking him to collect a letter at Paphos immigration. On arrival, he was immediately arrested and faces deportation.

This is the second time that the popular Paphos resident has been arrested.

In 2014, whilst volunteering for the cancer patients’ charity PASYKAF, Dhull was arrested in an immigration swoop and was held for 27 days in a police cell before being released. He had refused to sign documents which would allow officials to send him back to India, instead saying he wanted to remain in Cyprus.

His daughter, Zoe, who speaks Greek and English and attends a local Greek school, was born at Paphos general hospital on June 25, 2013 and the family planned to leave Cyprus shortly after her birth. However, she was diagnosed with a heart defect which had gone undetected during pregnancy.

Zoe was rushed to the Makarios Hospital and her parents had less than two weeks to raise the €15,000 needed to pay for a vital cardiac catheterisation in Israel as the operation could not be done in Cyprus.

They had no private medical insurance and were unable to obtain a state medical card as their visas had expired. The health ministry stepped in and offered to pay the costs, and at just three weeks old Zoe underwent the life-saving operation at the Schneider Children’s Medical Centre in Israel.

Although the parents’ visas had expired, the authorities had told them that they could remain in Cyprus at least until baby Zoe’s treatment was completed.

After Dhull’s release, the interior ministry subsequently decided that the family be allowed to remain in Cyprus on humanitarian grounds. Zoe attends six-monthly check ups with her doctor at Makarios hospital and may require a further operation at the age of 16.

Dhull was granted a visa and permission to work in Cyprus and secured a good job, in order to support his family. However, wife Virginia explained that the situation is now complicated.

“Our previous lawyer was dealing with immigration and was told that Sanjeev had been sent a letter on January 4, saying we had to leave within a period of time. But we never received it, so the lawyer was then sent another letter on May 18.”

Confusingly, also on January 4, the ministry of labour gave Dhull permission to work Cyprus until October this year.

The recent immigration letter states that Dhull must leave, otherwise measures will be taken in 14 days, but also states that he has the right to file a recourse at the court in accordance with article 146, within 75 days of the receipt of the letter.

“We are still in the time allowed and our new lawyer is doing this for us. I don’t understand why he was arrested, we are being given contradictory letters,” said his distraught wife.

Serghi Mirbagheri is currently collecting all of the couple’s relevant paperwork and will file an appeal at the Supreme Court, as well as contacting the minister of the interior and the police.

“I am hoping to secure Sanjeev’s release from the police station. The minister of interior has an ability to grant an extension on humanitarian grounds, such as when a sick child is involved,” she said.

In the meantime, Dhull looks set to spend his birthday on Friday July 20, in a prison cell.