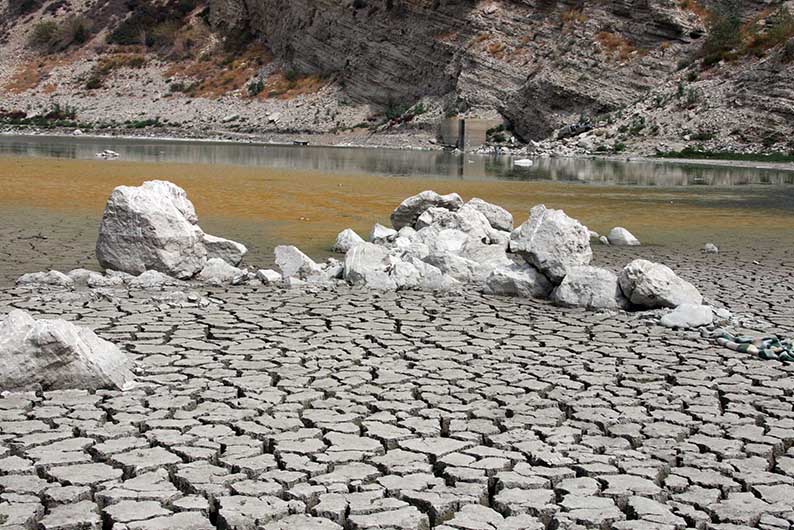 Another year, another drought, reservoirs less than a quarter full, water being rationed. This is not a one off. Due to climate change it is a process that has become quite frequent around the East Med and in Cyprus.

The recent climate change conference organised by the Cyprus Institute in Nicosia in May, concluded that without arresting climate change, the average temperature in the Eastern Mediterranean will rise steadily, and if the world carries on as usual it is expected to exceed 4°C by the end of the century. Generally, the region is expected to have much drier, warmer conditions and prolonged periods of high temperatures and droughts, more frequent fires, as well as increased pollutants and dust in the atmosphere with negative impacts on air quality and health. Does that sound familiar? It is in fact something we are experiencing already.

Droughts will become more frequent and, with Cyprus’ endemic water sparsity, the need for more desalinated water will only increase. But how can this be done at the required scale and affordably.

What is being done now

Severe water shortages are not new to Cyprus.

In October 2016 the Cyprus Mail wrote: “Water levels in reservoirs are dangerously close to those experienced during the 2008 drought, and another dry winter will only increase Cyprus’ reliance on costly, environmentally unfriendly desalination plants, it emerged this week. The worryingly low water levels have led to accusations that the state’s water policy is too short sighted in the light of long-term low rainfall. Critics say not enough has been done to develop sustainable water policies…”

Evidently, not only not much has changed since then, but this is now becoming the norm.

The 2008 drought led to the building of four desalination plants capable of producing a total 220,000 cubic metres of water daily, covering the supply needs of Nicosia, Limassol, Larnaca and Famagusta. Paphos still has no desalination plant.

But these are costly and environmentally unfriendly. On average, desalinated water costs about two-thirds more than dam water. They also emit carbon dioxide which undermines Cyprus’ commitments to reduce carbon emissions.

So more of the same is not a practical or affordable way forward.

What the rest of the world is doing

Methods of solar distillation have been employed by humankind for thousands of years. Early Greek mariners used a basic distillation technology to produce freshwater during their long voyages.

In the 1960s and 70s several modern solar distillation plants were constructed on the Greek islands with capacities ranging from 2000 to 8500 cubic metres per day (cm/d).

Over the last 30 years considerable research has been carried out to develop solar desalination methods. These are now leading to a number of industrial scale solar desalination projects taking off. In Chile solar desalination started in the 19th century to provide water to mines in remote arid areas. In 2013 Foundation Chile started a desalination plant, powered by solar energy, in the province of Arica to be used for irrigation and also to serve the water needs of dry areas.

Now, construction of ENAPAC – a solar-powered seawater reverse osmosis desalination plant and water conveyance project – is about to start. This envisages selling water to mining clients in Chile’s Atacama region.

In California, a company called WaterFX has a plant, Aqua4, which uses a concentrated solar thermal collector to compress heat, create steam and distill water. It can produce 65,000 gallons of freshwater per day.

But one of the most ambitious projects being built is the Al Khafji Solar Powered Desalination Plant in Saudi Arabia. The plant will employ the new Solar Saline Water Reverse Osmosis (Solar SWRO) desalination method. It will be able to supply up to 60,000 cm/d of desalinated seawater a day to the city, ensuring a constant water supply throughout the year. It is expected to become operational in 2020.

Evidently a lot has been going on and the technology is now being implemented in earnest. Freshwater shortage is a global problem.

What is holding up Cyprus?

Unfortunately, Cyprus is still going through a prolonged transitional period before full energy market liberalisation. However, Cyprus Energy Regulatory Authority (Cera), has published a binding timetable committing that the electricity market in Cyprus will be liberalised on July 1, 2019.

This will involve unbundling of the state electricity authority (EAC), with the production and supply operations separated. EAC production would then enter into bilateral agreements with suppliers for the sale of energy at regulated prices. Transmission will be operated by the Transmission System Operator (TSO), which must first become independent of the EAC.

Sadly, this is not likely to happen as planned. Apparently, the TSO and the Distribution System Operator (DSO) are not yet ready! The regulation of the electricity market law still has to be amended to render the TSO fully independent of the EAC. After years of prevarications and in full knowledge of what needs to be done, Cyprus is not ready for energy market liberalisation. Only one word can describe this – unbelievable!

This is what is holding up wider use of solar energy in Cyprus, to the detriment of the Cypriot energy consumer, who pays the cost – sadly though without any serious complaint. The electricity cost on the island is one of the highest in Europe, and it is a drain on its economy, something which is very difficult to justify – it is inexcusable. It begs the question about how genuine Cyprus is in committing to energy liberalisation and much wider use of renewables.

The earliest the energy market liberalisation can now happen is 2020. The time between now and then should be used to ensure that when it is implemented it is ‘genuine’ liberalisation, benefiting from the latest developments in Europe, including open competitive auctions. Hopefully this will now proceed as planned, having been postponed an incredible number of times to date.

When it comes to solar power and desalination, Cyprus does not need to go far. It can benefit from the latest, globally recognised, research at its doorstep.

The Commonwealth Scientific and Industrial Research Organisation (CSIRO) and Cyprus Institute (CyI) set up a solar research facility, Proteas, on the southern coast at Pentakomo. This aims not only to generate electricity but also to provide fresh water by powering an energy intensive desalination plant.

It is developing and testing technologies relating to concentrated solar power (CSP) and solar seawater desalination. CyI identified this as particularly suitable for island and coastal environments and can also be deployed on hilly terrain in parts of Cyprus not currently in any gainful use or subject to any special restrictions.

Serious consideration should also be given to converting existing plants to solar, if Cyprus is serious about its intentions to reduce carbon emissions to European requirements. More of the same will not achieve this.

A wide array of challenges face Erdogan in wake of victory