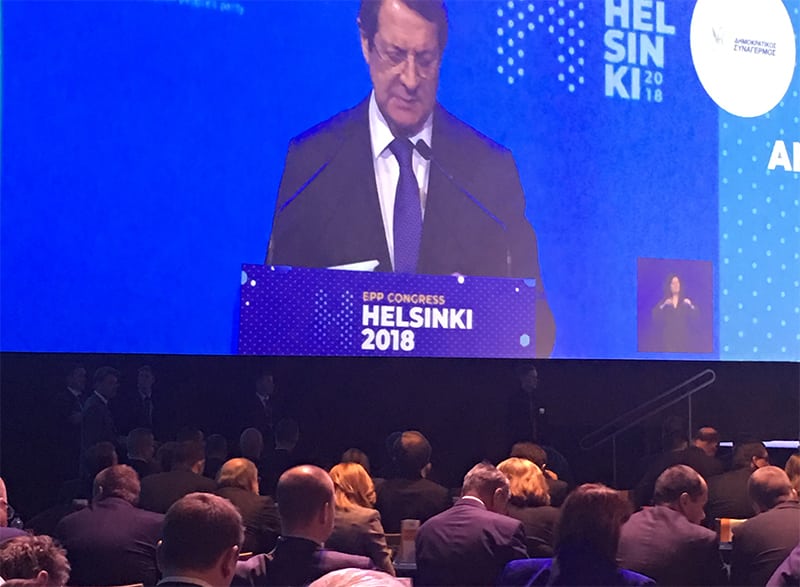 The Cyprus problem is in fact a European problem and healing this wound would contribute to a stronger Europe, President Nicos Anastasiades said on Thursday.

Speaking at the 25th Congress in Helsinki of the European People’s Party (EPP), of which ruling Disy is a member, Anastasiades expressed appreciation for the renewal of EPP support for “efforts to find a fair and lasting solution to the Cyprus problem”.

“As we endeavour to ensure peace, security and prosperity in Europe and our wider region, we must not forget that the European Union was founded on principles to safeguard peace, our way of life, democracy and prosperity, equality and human rights,” Anastasiades said.

He added that what happens on the eastern and southern regions has a direct impact on the EPP family.

As the President of Cyprus, he said, “which still endures occupation of 37 per cent of its territory and flagrant violation of the fundamental freedoms and human rights of its citizens, either Greek or Turkish Cypriots, by Turkey contrary to international and EU law, I need to press on the importance of reunifying the EU’s last divided member state.”

The outdated division of the island, he said, has been known as the ‘Cyprus problem’. “This is not an accurate title. It is in effect a ‘European problem’, an open wound for Europe.”

Healing this European wound, Anastasiades said, would contribute significantly to a stronger Europe, also in light of the huge prospects in the energy field.

“Reunification, a viable, functional and lasting solution that safeguards Cyprus’ independence and sovereignty based on UN Security Council Resolutions and the EU acquis, principles and values, will allow it to further develop its role as an anchor of stability in the Eastern Mediterranean and as a bridge between the region and Europe benefiting all Europeans.”

The EPP Congress on Wednesday adopted an emergency resolution on the Cyprus problem talks whereby it reiterated its support for a comprehensive, sustainable and viable settlement of the Cyprus problem in accordance with the relevant UN Security Council Resolutions and in line with EU law and values.

The 44 years of military occupation imposed by Turkey on Cyprus, it said, must cease while it expressed deep regret about the recent stalemate in the negotiations. There is an urgent need for the negotiations to resume between the two communities under the auspices of the United Nations Secretary General’s Good Offices Mission, it said, adding that the EPP “supports Anastasiades’ and Disy’s efforts to maintain the dialogue between the two communities and welcomes the initiatives taken in this respect.”

The EPP called on Turkey “to take all necessary and constructive steps” to facilitate the negotiations. It also said it condemns Turkey’s threats to disrupt Cyprus’ drilling programme within its Exclusive Economic Zone, and called on her to respect Cyprus’ sovereign rights over its EEZ.

Anastasiades and a delegation of the ruling Disy, headed by its leader Averof Neofytou, are attending the congress which elected leader of the EPP in the European Parliament since 2014 Manfred Weber as its candidate for the European Commission presidency.

According to the Cyprus News Agency, on the sidelines of the congress Neophytou had the opportunity to chat with European Commission President Jean-Claude Juncker, European Council President Donald

Tusk, German Chancellor Angela Merkel and Austrian Chancellor Sebastian Kurz.
He also had a conversation with Spain’s People’s Party leader Pablo Casado, with whom they agreed that there can be no cessations within EU member states, referring to Catalonia and the Cyprus issue.