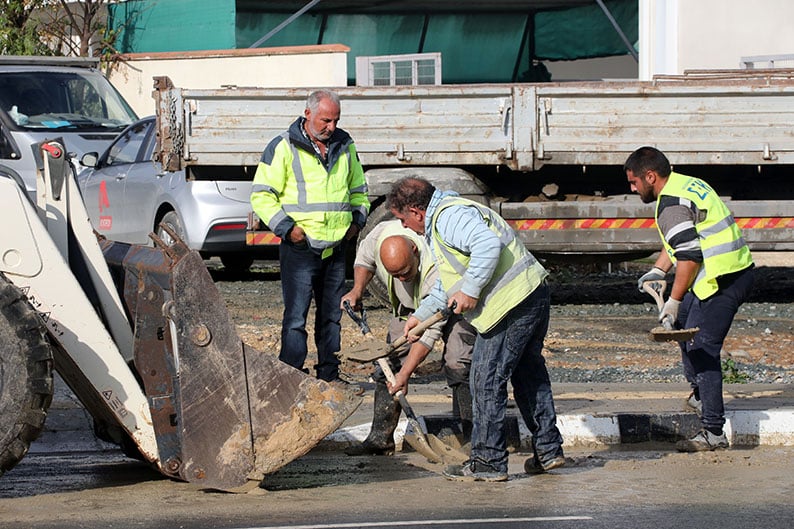 A huge thunderstorm during the night caused havoc in the Nicosia and Limassol districts. It is now also affecting the Larnaca area, where a sudden hailstorm happened on Monday lunchtime.

More of the same weather is forecast for the evening. All areas of the island have been badly hit.

Thunder, lightning and strong winds that began at about 2.20am woke Nicosia residents who watched as the heavy rain transformed some roads into rivers.

Meteorologist Cleanthis Nicolaides said a yellow weather warning should have been announced. “The storm got stronger as it moved east,” he said, explaining that it first struck Paphos, then moved over the mountains to Nicosia, Limassol and Larnaca.

The low pressure system is expected to stay around until late Thursday or even early Friday, but it is not yet clear if a warning will be needed for more days.

The fire service had a busy night answering calls for help from people trapped in cars and people whose houses were flooded. They were also towing vehicles from flooded roads.

There were more than 200 calls for help during the night, fire services spokesman Andreas Kettis said.

We prioritise and respond to the most urgent cases first.” He is urging the public not to call the services when the situation is manageable and notify them when waters have subsided.

Some Nicosia residents complained their calls were not answered, but Kettis pointed to the large number of problems and asked the public to be patient.

The Nicosia municipality announced that more than 70 workers have been going around the city on foot to tackle various problems in the worst hit areas.

According to their announcement, the Melina Mercouri Hall and Famagusta Gate flooded and suffered serious damage.

The Kateva river overflowed, creating problems in areas west of the river. In addition, drains were blocked which meant a number of areas were flooded, such as Phaneromeni and Onasagorou.

The municipality expressed its deep dissatisfaction with the delay in the upgrading of the Nicosia main pipeline and the completion of the works on Famagusta avenue by the competent authorities.

“If these projects were implemented, as the city has repeatedly called for, the damage would be much less,” the announcement said.

People are urged to clean drains outside their homes and can call the municipality at 97-811154 to report any problems.

Eleven crews of the fire services responded to calls in Nicosia. Head of the services Marcos Trangolas coordinated the actions of the services from 4am, and the emergency rescue unit joined in to help at 4.30am.

Several trees were uprooted in both the Nicosia and Limassol district resulting in some power cuts, some of them lasting for hours. As Kettis did before her, spokeswoman of the electricity authority Christina Papadopoulou told residents to be patient while the employees of the authority move around fixing various faults.

In Nicosia, Larnaca and Famagusta avenues and Alexandoupolis road in Strovolos were closed to traffic. The exit of the Limassol to Nicosia motorway leading to the former Orphanides supermarket was also closed as water has accumulated on the road.

Traffic lights near the former Orphanides supermarket were out of order causing traffic congestion.

By 10.30am police reported that the roads have reopened but warned the public that in many areas roads are slippery and drivers are urged to drive carefully.

In the Limassol district, the roads from Palodeia to Agros, Ayia Paraskevi to Agros and Laneia to Trimiklini have become dangerous because of landslides.

Trees which were uprooted because of strong winds and fell down were causing power cuts in Trachoni, Parekklisia and Amathundas. A cemetery in Prekklisia was damaged by a whirlwind.

The fire services are in contact with local authorities, the public works and police, Kettis stressed. They are also receiving updates from the met services on weather conditions.

According to the website of Yeni Duzen, and industrial area in Nicosia was badly flooded, as were shops. In front of the Ataturk sports centre on a central avenue, a car was overturned due to  strong winds, while power was cut in many areas.

The site publishes several photos of the damage. It also writes that damage was sustained by houses and shops in Kythrea village where a wall collapsed killing goats and hens that the owner had in his yard.

Turkish Cypriot police announced in the morning that they had closed a major highway towards the main hospital due to flooding, and that traffic was being diverted.  There  has also been a landslide on the Kyrenia-Kythera road stretching for 500 metres and the road was closed for traffic.

More rain and hail is expected for Tuesday, especially in the evening, while in the Troodos mountains there could be snowfall at night. Top temperatures are forecast to be 19C in most areas and 9C in the mountains.

Open Mic Night for all