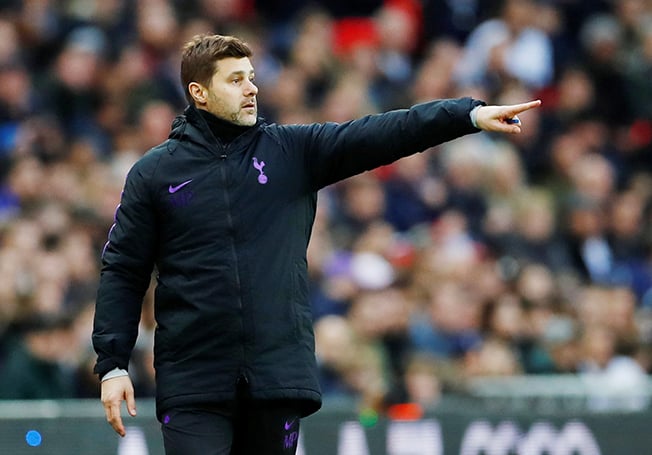 Tottenham boss Mauricio Pochettino takes on Man United, who reportedly want him as the permanent successor to Jose Mourinho

The Premier League returns this weekend following the FA Cup third round with plenty of talking points at both ends of the table.

Chief among them is the intriguing contest at Wembley on Sunday, where Tottenham boss Mauricio Pochettino takes on the club who reportedly want him as the permanent successor to Jose Mourinho.

Ole Gunnar Solskjaer has made no secret about how much he wants the Manchester United job full time, but is up against the man widely tipped to be the Red Devils’ first choice for the position long term.

Solskjaer has won his first five games as interim manager since Mourinho’s sacking last month but the game against Tottenham represents by far the biggest test of the Norwegian’s tenure so far.

A positive result for Pochettino will only fan the flames of those calling for him to be the man handed the reins in the summer – but what if Solskjaer wins the tactical battle?

Defeat to closest title rivals Manchester City was followed up with a much-changed side losing to Wolves in the third round of the FA Cup.

It may only be a small blip for the Reds but they will be keen to correct it with victory at Brighton on Saturday.

West Ham face a London derby against Arsenal at the London Stadium on Saturday as the future of one of their stars is once again up in the air.

Marko Arnautovic has been the go-to man for the Hammers in recent months but is seemingly angling for a move to the Chinese Super League in the January transfer window.

It remains to be seen if Manuel Pellegrini will keep faith in the Austria forward for the visit of the Gunners, with the reaction of the home fans likely to be hostile.

Can Bluebirds can fly high and leave Terriers in the doghouse?

Cardiff were one of the early relegation favourites but have won four of their last seven home games and picked up three points at Leicester last month.

They host bottom club Huddersfield this weekend looking to bounce back from heavy home losses to Manchester United and Tottenham, as well as an FA Cup exit at the hands of Gillingham.

Huddersfield have picked up just five points on the road and sit eight points adrift of safety, with David Wagner’s men needing to turn the tide sooner rather than later.

Wolves were promoted alongside Cardiff last season but have different ambitions.

They have already secured draws against Manchester City and Manchester United, won 3-1 at Tottenham and knocked Liverpool out of the FA Cup last time out.

They host the champions at Molineux on Monday night and could prove to be another thorn in the side of Pep Guardiola’s side, who will know the Liverpool result and what it means to their title ambitions.

Trump to preside over the longest shutdown in U.S. history