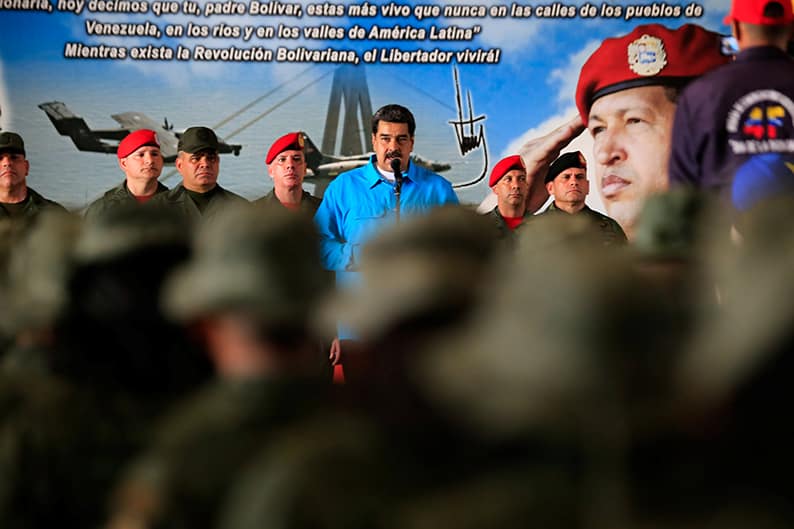 Venezuela's President Nicolas Maduro still has the support of the military

Venezuelans should change their president not outsiders

Recognising a rival president in another state with menaces of the type used by US President Donald Trump to frighten Venezuela’s government is in breach of the UN Charter that prohibits the threat of force against the political independence of another state.

Britain has been bounced into regime change yet again though this time she is not alone. A number of other European and other states have joined the US in the scramble for Venezuela’s oil wealth.

Once again, another state’s oil wealth is key; once again an allegedly rogue wayward leader is picked on as a danger to his people; once again the usual suspects are engaged in regime change manoeuvres and once again Russia and China are dead against such a cavalier disregard of international law.

Last time it was weapons of mass destruction (WMD); this time it is the weaponisation of international recognition. The illegality is as obvious as it insidious. Given that the recognition by so many European states of the rival government of Señor Juan Guaido, as interim president of Venezuela was instigated by the most unpopular US president in Europe ever, the evidence points ineluctably to a common purpose to manoeuvre Venezuela’s oil wealth away from Russia and China. Call me a cynic but the haste to recognise an unknown figure as interim president of the richest oil state in the world was not done for the love of the poor people of Venezuela.

That said, the recognition of a rival government in another state raises fascinating points of international law that are not without interest in Cyprus that has been struggling with recognition issues virtually since independence.

Despite such an important achievement there was an attempt to abolish the state of Cyprus in 1974 when the dictatorship in Greece mounted a military takeover to dissolve the RoC and unite Cyprus with Greece. As in the case of Venezuela a rival government was set up in Cyprus under one Nicos Sampson, but it did not prosper. It was stopped by Turkish military action at the behest of President Makarios in a speech at the UN Security Council on July 19, 1974. Unfortunately, Turkey then went off on a tangent, quite literally, that destabilised the state of Cyprus to this day – though not the government of the RoC.

In 1983 the Turkish Cypriot leadership launched the ‘Turkish Republic of Northern Cyprus’ as a rival entity in an attempt to secede from the RoC, but the attempt was declared legally invalid by the UN Security Council. The state of Cyprus is now at a crunch point and the Turkish Cypriot community is agonising whether and how to rejoin the RoC or what to do if it is definitively excluded from its rightful status as a community under the RoC constitution of 1960.

Nothing that happened in Venezuela recently alters the fact of its existence in the way the takeover by a rival president did in Cyprus in 1974. Venezuela fulfils the statehood criteria of territory, population, government and international recognition and has done so since 1830.

What the US and her allies are destabilising is the government of the Bolivarian Republic of Venezuela set up by Hugo Chavez in 1999. Hugo Chavez was a charismatic socialist leader in the mould of Fidel Castro, Salvador Allende and Che Guevara. He shared out Venezuela’s oil wealth among all her people. As a socialist state Venezuela is naturally close to Cuba which is anathema to Donald Trump and his ilk in the US. Hence the attempt at regime change.

Unfortunately, Chavez was not provident and when oil prices plummeted Venezuela got into serious economic difficulties. In 2011 he developed cancer and famously needed permission from the National Assembly to leave Venezuela for treatment in Cuba where medical care is the best in the region compared to Venezuela where hospitals are in an appalling state.

Chavez died in 2013 as the oil crisis broke and was succeeded by the hapless current incumbent, Nicolás Maduro, who looks uncannily like Saddam Hussain – perhaps the US does not like dark, moustachioed, good looking men as leaders in oil rich countries.

Joking apart, there is no doubt Venezuela is in total crisis but much to the chagrin of the rest of America, north and south, Maduro was voted in as president a second time in May 2018. Oil prices are still low, the government is corrupt, his re-election was allegedly rigged, inflation is rocketing and people are leaving and spilling over into neighbouring countries while the US and Russia are at loggerheads over America’s recognition ploy. Not for the first time, Russia claims, with some justification I have to say, that there are other ways to deal with the crisis in Venezuela than to overthrow her elected government.

The US has always asserted a sovereign right to give or withhold recognition to states and governments for political reasons – the People’s Republic of China, population one billion, was not recognised by the US until 1979. But the criticism of the US in Venezuela is that she is interfering in the internal affairs of another state by recognising a rival government having made a veiled threat to use force against her political independence.

What the National Assembly’s Juan Guaido did was bypass proper constitutional procedures by declaring that the elected leader had abandoned his duties as president – presumably because the economy was in free fall and people were quitting the country. There are, however, clear procedures available under Venezuela’s constitution to remove a president for incapacity, abandonment of his position, or recall by popular vote.

Under Venezuela’s Bolivarian constitution, a controversy between the president of the republic and the National Assembly, is for the Supreme Tribunal of Justice to resolve. Ultimately however the most democratic way forward is ‘recall by popular vote’ – a brilliant progressive tool by which voters can withdraw their mandate to a president. But to have what amounts to a repeat presidential election has to be done without foreign meddling.

Tales from the coffeeshop: Schools and army redefine students