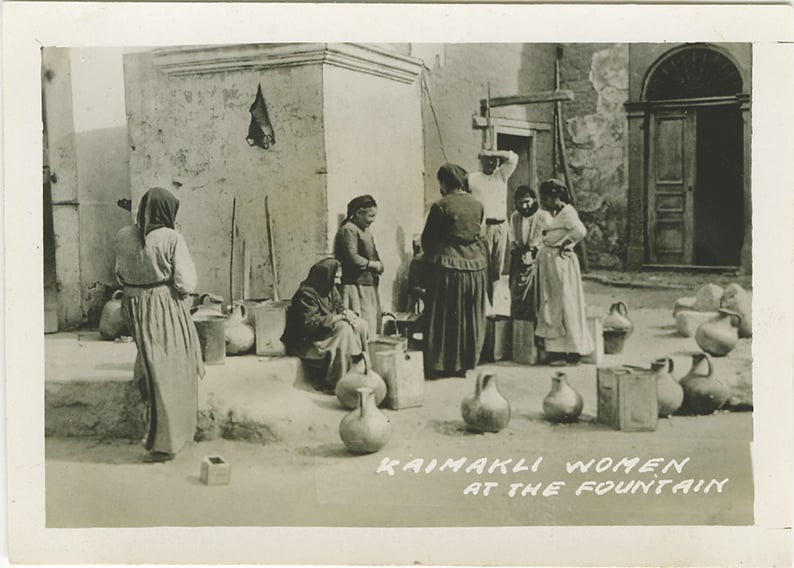 (All photos copyrighted to the Costas and Rita Severis collection. Acknowledgements to the Centre for Visual Arts and Research)

THROUGHOUT the ages, the island’s fertile land, easy living, and ideas proclaiming its women as descendants of Aphrodite, drew travellers to Cyprus like a siren’s song, searching for an earthly paradise.

‘Unscrupulous Men and Lascivious Women: The Construction of Cypriot Sexualities by Travellers to Cyprus’ was the title of a striking talk last week by Rita Severis, delving into ancient literature on Cyprus that shaped its reputation for lavish lifestyles and lax morals, as well as into the narrations of visitors whose encounters only served to shatter those myths however.

The link to Aphrodite, the goddess of love, beauty, sexuality and desire in Ancient Greek religion and mythology, was especially strong in antiquity, Severis said, and particularly in the regions of Kouklia, which hosted Aphrodite’s temple; Amathus, where an ancient cult sanctuary of the goddess once stood; and of Cape Apostolos Andreas in the Karpasia peninsula, which hosts the ruins of the temple of Aphrodite, Acraea.

In the 5th century BC, Herodotus refers to a “the foulest Babylonian custom” which is practiced in some parts of Cyprus, whereby every woman is compelled “to sit in the temple of Aphrodite and have intercourse with some stranger.”

The custom required the men, as they cast their money, to say “I demand thee in the name of Mylitta [the Assyrian name of Aphrodite],” after which it would be a sin for the woman to refuse. “So she follows the first man who casts it and rejects none. After their intercourse she has made herself holy in the goddess’ sight and goes away to her home,” Herodotus continues.

In Bacchae, Euripides refers to the island: “And there are the Graces, and there is Desire.”

Travellers from the early Latin and until the late Ottoman period were educated men with knowledge of the Classical Greek and Latin writers, Severis said, and were therefore carriers of the fantasy of an exotic island with a history of divine prostitution.

Coupled with blistering heat and herbal aromas, “all these, to the mind of travellers, were very conducive to arousing base instincts and sexual desires,” Severis said.

This Cypriot imaginary was maintained through the writings of the first medieval travellers, who, Severis said, interpreted what they saw into what they expected to see.

Severis referred to Ludolf Von Suchen, a priest from Westfalia, who commented while visiting in 1341 the Castle of Venus in Paphos that “the soil of Cyprus, and especially where the castle is, if a man sleep thereon, of its own self will all the night through provoke a man to lust.”

Like sirens and their songs, early travellers inscribed on Cypriot women almost supernatural abilities which left men spell-bound, pulling them into sinful domains despite their better judgement.

Though not all were enchanted by what they ultimately found.

St Birgitta of Sweden who visited Cyprus in 1372 on her way to the Holy Land, Severis said, experienced a revelation where God said “this city is Gomorrah, burning with the fire of luxury and excess and desire. Therefore, its buildings will collapse and it will be deserted and ruined… because I am angered with them.”

In 1563, when Cyprus was under Venetian rule, Elias of Pesaro called the island’s people “liars, cheats, thieves. Honesty has vanished from their midst.”

Particularly in the Ottoman period, Severis noted, women hardly ever covered their faces and seldom their heads, in a country surrounded by lands where this would be seen as sacrilegious.

Beyond religious propriety, the dress of Greek Cypriot women was seen as indecent and overexposing by European travellers who could not, or perhaps refused to, take account of the climatic conditions of the island which imposed the need for lighter clothing.

Prussian traveller John Bramsen in 1814 noted that “they wear less covering on their bosom than a European eye could reconcile with decency.”

Turkish Cypriot women were also below William Turner’s standards, who in 1815 commented that their charms are destroyed due to “their frequent use of the baths, the enemy of female attractions throughout the Levant.”

In what could be interpreted as a pleasant form of resistance to these early forms of the male tourist gaze, where travellers arrive already equipped with their own worldviews and principles, through which they form value-judgements on the objects of their sight, the women of Cyprus were found to be ugly and fat, shattering the myth of Aphrodite and ideas of an exotic cornucopia.

Severis quoted Alexander Drummond, the British consul to Aleppo and Cyprus, who wrote during the Ottoman period that “The men are worse than beasts, the women more ugly than fancy can conceive human females to be, especially in an island which was once the seat of beauty and of love.”

Catalan Ali Bey el Abassi, an ardent admirer of Venus, Severis said, was greatly disappointed by the female beauties of Cyprus in 1806: “I confess that, putting aside the conventional style which I notice about all modern women, the result perhaps of the depression and stupor of their political position, their round and expressionless faces, their loose bosoms and their awkward gait do not give one a favourable idea of the much vaunted beauty of their ancestors.”

In 1827, Charles Frankland could not reconcile the link between Cyprus and Aphrodite, as he claimed “God only knows how this island ever attained its celebrity for beauty; for to judge of it from the specimens we saw, one would have said it was the last place which Venus would have chosen in which to fix her favourite residence.”

At the onset of British colonisation, the first High Commissioner, Garnet Wolsely, wondered one Sunday afternoon if there is a special time of the year when people mate in Cyprus since all women seemed pregnant, Severis said.

In true colonial spirit, the first Victorian lady to reside in the island, Esme Scot Stevenson, said that “some of the natives were the very blackest people I ever met, so intensely black that I know of nothing to which to compare the colour of their skin.”

Cypriot women were viewed as “unsightly” by European beauty and fashion standards, and men as lazy and ignorant, while the native population was in general “placed lower down the ladder, to the sphere of basic instincts,” Severis said.

Behind the prejudices and the false sense of superiority that underpins these outlooks on the Cypriot people throughout the ages, Severis highlighted that Cypriot women were poor, and were in their majority labourers spending full days in the sun, in addition to being a race under almost uninterrupted subjugation from foreign invaders.

“As to the morality of the Cypriots, was there prejudice behind the comments or facts?” Severis asked.

Just like boys were given to monasteries for their survival so were girls from poor villages often assigned as helpers to families in towns, where girls would often be forced to give in to the sexual desires not only of their masters but also of the sons of the family, Severis said.

If they refused, “it was not uncommon for the girls to be thrown out of the families if they did not perform their duties to the satisfaction of their mistress, in which case they often ended up prostituting themselves,” Severis added.

Despite the shattering of the myth of Cyprus as the land of Aphrodite which worked to render the female population descendants of the goddess in overseas imaginaries, tourist agencies today continue efforts towards keeping the myth alive, concealing recorded historical accounts of often dream-shattering realities.