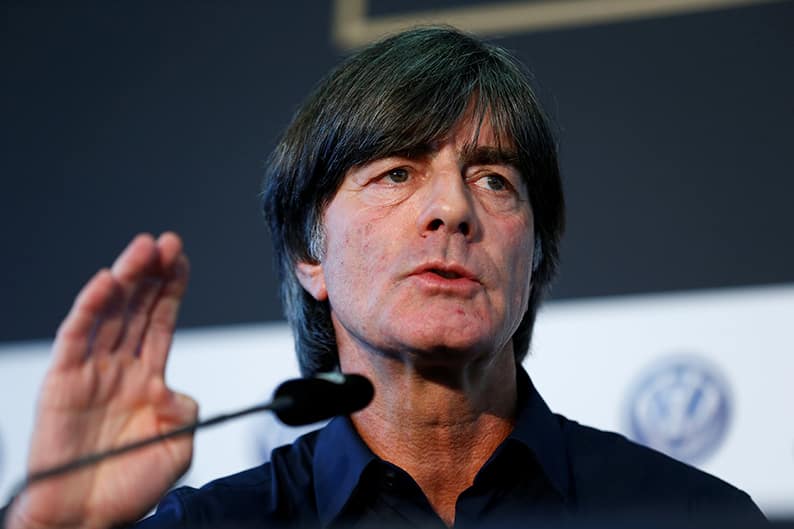 Germany coach Joachim Loew on Friday called up three newcomers to his squad for this month’s internationals, saying his team overhaul was ongoing after a disappointing 2018.

Lukas Klostermann, Niklas Stark and Maximilian Eggestein were included in a 23-man squad for a friendly international against Serbia on March 20 and the Euro 2020 qualifier against Netherlands in Amsterdam four days later.

“We have young players to give responsibility and see how they handle it,” Loew told a news conference. “We have the players who can grow into these roles.”

He said the decision was a necessary one as Germany, World Cup winners in 2014, looked to change their playing style.

“A new cycle is starting with the Euro 2020 qualifiers and given last year’s results changes are necessary,” Loew said.

“After the end of the Nations League we thought about how the team should play in the next qualifiers, how it should look in 2020.”

The Bayern trio were irritated by their unexpected and forced international retirement, with Mueller and Hummels saying they would continue fighting for places in the team.

“These are not decisions taken from one day to the next,” Loew said. “It was a process where changes would happen. I told them I am not planning with them for the Euro qualifiers and Euro 2020.”

“For me personally the most important thing was that I inform the players personally.”

He said his young German team would now look to recover their dominance during matches while also increasing speed and efficiency in the last third of the pitch.

“We need to be more focused and efficiency… and faster in attack.”

Loew also gave Neuer his backing, saying the keeper, who has been far from convincing this season and was to blame for Liverpool’s first goal in their 3-1 win at Bayern in the Champions League on Wednesday, would remain his number one choice ahead of Barcelona’s Marc-Andre ter Stegen.

“Neuer is currently our number one. This year we have almost exclusively qualifiers. Ter Stegen will get his chances and then we will see what happens,” Loew said.

“Neuer knows he has to deliver performances. But for the moment he is our number one.”