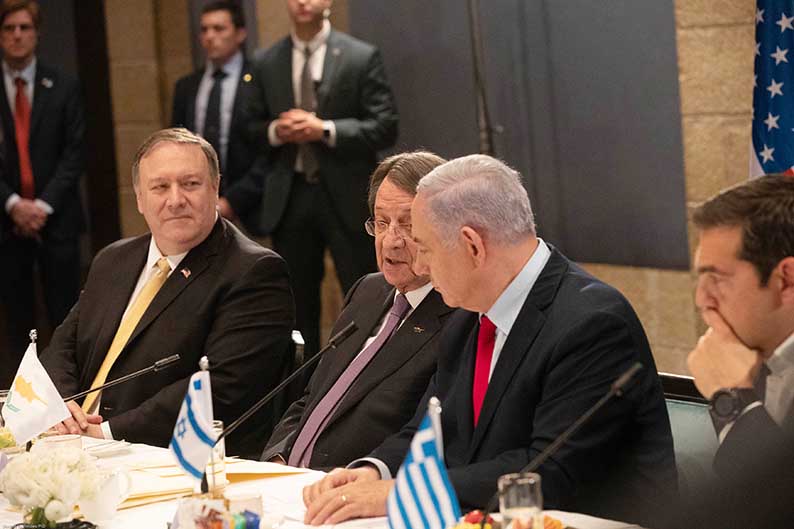 WHILE the sixth trilateral summit of Cyprus, Greece and Israel unfolded amid much pomp in Jerusalem this week, commentators here delivered all the hackneyed talking points: enhancement and upgrading of Cyprus’ strategic role, alignment with the United States, a meeting of historic significance. Local media crowed about the participation of US Secretary of State Mike Pompeo. But absent any hard outcome, these sanguine interpretations may well be a case of reading the runes.

In Cyprus, the Jerusalem confab was hailed as a milestone for energy and security. No one explained how exactly. Meanwhile the typical navel-gazing supposed that all this was directed at Cyprus’ perceived adversary, Turkey.

The Sunday Mail reached out to a geopolitical analyst to get a more grounded perspective.

Zenonas Tziarras, a researcher with the Prio Cyprus Centre and co-founder of Geopolitical Cyprus, says the trilateral was indeed hyped up. At the same time, though, one cannot altogether dismiss it as a mere photo-op for politicians.

“Nicosia did a good job in organising the meeting and having Pompeo participate – transferring the meeting from Crete to Jerusalem probably had this objective. It was an event that had symbolic and some political importance.

“However, there were expectations that the 6th trilateral meeting would receive American support for Cyprus’s EEZ rights – although Washington reiterated its position multiple times – and the EastMed pipeline. None of the two happened and, notably, none of these were included explicitly in the joint communique.”

According to Tziarras, judging from the outcome and the coverage in Israeli media, Pompeo’s presence was understood and capitalized more as support to Benjamin Netanyahu who’s facing legal troubles and an upcoming election.

“Very little coverage was given to the trilateral meeting and none of it depicted Pompeo’s participation in the way Cypriot and Greek media did. The Wall Street Journal reported that Pompeo’s visit was seen as a boost to Netanyahu. This argument was further strengthened later on when Trump tweeted about the recognition of the Golan Heights – a move that was considered a big win for Netanyahu’s government.”

Much was made of the joint declaration, where the governments of the four nations agreed to “defend against external malign influences” in the eastern Mediterranean and the broader Middle East.”

“The remark is based on the principle of constructive ambiguity. Namely, it leaves everyone happy because it allows everyone to interpret it as they like.

“However, looking at the US State Department’s long press release regarding Pompeo’s tour, one will see there is a whole section under the title ‘Countering Iran’s Malign Influences’, which was also Pompeo’s official reason for visiting the Middle East (Israel, Lebanon, and Kuwait). This is hardly a coincidence.”

More broadly, are these trilaterals mere talking shops, or is there some grand design?

In other writings, Tziarras has described the Cyprus-Israel-Greece partnership as a “quasi-alliance,” a less formal and flexible form of alliance than traditional ones.

The historical context is useful.

“The notion of trilateral partnerships emerged in the aftermath of two main developments: the deterioration of Turkey’s relations with Israel in 2010 (and later with Egypt in 2013), and the discovery of hydrocarbons in Cyprus’ Exclusive Economic Zone. In the context of gradual American withdrawal from the region and an assertive Turkish foreign policy, the partnerships first developed on a bilateral basis, namely between Cyprus/Greece and Israel and later expanded to a trilateral format including Egypt and Jordan with the prospect of more states joining the network.

“There are both security-related and profit-related, individual and collective, drivers behind the formation of these partnerships. In a nutshell, for Cyprus and Greece, who never really had a close relationship with Israel and focused more on the Arab world, these new partnerships allowed them to develop a less monolithic foreign policy and provided political-diplomatic support to Cyprus’s efforts to find and exploit its natural gas as well as in terms of the resolution of the Cyprus problem and the Turkish threat.”

As for Israel and Egypt, the analyst says, they found support in their diplomatic confrontation with Turkey which, importantly enough, gave them access to the EU as well through Cyprus’s and Greece’s advocacy for Israeli and Egyptian matters within European institutions.

Last but not least, the hydrocarbon discoveries in the Eastern Mediterranean created many prospects and expectations for a formula of joint energy cooperation.

“This vision started to materialize early in 2019 with the establishment of the Eastern Mediterranean Gas Forum which is, however, at its early stages and at this point in time serves as a symbol of the consolidation of cooperation.

“Looking at how these partnerships were developing, the US and EU provided their support and observed them closely as they saw an opportunity for creating a pro-Western network of cooperation that would limit Russian influence in the eastern Mediterranean – including in Cyprus, Greece, Israel, Egypt and by extension Syria – and provide access to and influence over the new energy routes that would emerge in the future.”

He adds: “As the EU is trying to reduce its energy dependence on Russian natural gas and the US is rather failing in Syria, insofar as the Russian and Iranian presence is solidified and Bashar al Assad managed to survive, securing western partners – in conjunction to partners elsewhere in the Middle East and the Gulf – in the eastern Mediterranean has become even more imperative.”

But is Cyprus gaining anything concrete out of these trilaterals?

Tziarras offers: “One should grant Cyprus that it managed to exploit the errors of Turkish foreign policy and pursue a pro-active foreign policy agenda in the eastern Mediterranean and beyond. Because of these partnerships, Cyprus does have the political and diplomatic support of Israel and Egypt, at least on the rhetorical level, vis-à-vis Turkey’s stance in the Cyprus talks and the EEZ.

“However, leaving aside the successful collaboration that developed in many domains such as trade, tourism and intelligence sharing, this support has not yet manifested in any tangible way vis-à-vis Nicosia’s first strategic goal which – according to the government – is the resolution of the Cyprus problem. Nor has it borne yet any fruits in the energy domain.”

Our View: More seriousness needed in approach to foreign policy

Trains, planes and automobiles: the story of Bentley’s founder