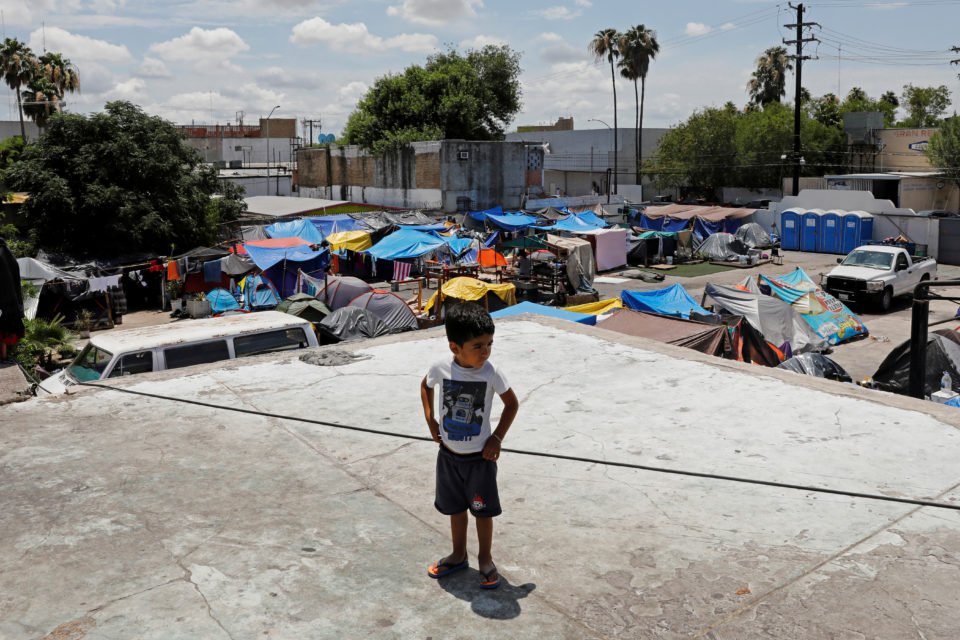 A migrant child stands on the roof of a shelter in Nuevo Laredo, Mexico June 5, 2019. REUTERS/Carlos Jasso

Mexican and U.S. officials are set to resume talks in Washington on Thursday aimed at averting an imposition of tariffs on Mexican goods, with President Donald Trump saying “not enough” progress on ways to curb migration was made when the two sides met on Wednesday.

Frustrated by the lack of progress on a signature issue from his 2016 election campaign, Trump unexpectedly told Mexico last week to take a harder line on illegal immigration or face 5% tariffs on all its exports to the United States starting on Monday, rising to as much as 25% later in the year.

Vice President Mike Pence chaired the meeting on Wednesday afternoon with Secretary of State Mike Pompeo and Mexican Foreign Minister Marcelo Ebrard to make the case that Mexico needed to do more to stop a surge in Central American migrants crossing the border.

With Trump in Europe for D-Day commemoration ceremonies until Friday, a quick resolution had never been anticipated.

“Immigration discussions at the White House with representatives of Mexico have ended for the day. Progress is being made, but not nearly enough!” Trump said in a tweet on Wednesday evening.

Ebrard told a news conference that Wednesday’s discussions had focused on migration rather than tariffs. The United States wanted measures that would have a short-term impact but Mexico is aiming for longer-term solutions, he said.

“A number of possibilities were discussed that need to be looked at in more detail to try to find some common ground” on Thursday, Ebrard said.

If the tariffs go ahead, the United States would be in a serious trade dispute with both China and Mexico – two of its three top trading partners. That is a situation that U.S. business groups are keen to avoid.

Mexico also wants to stop a trade war that analysts believe might tip its economy into a recession and Mexican President Andres Manuel Lopez Obrador has said he is optimistic that an agreement will be reached.

But his administration is preparing for a no-deal outcome, too.

An official list of U.S. products that could be subject to retaliatory tariffs if the duties take effect is principally tailored toward products from agricultural and industrial states regarded as Trump‘s electoral base, a Mexican official said.

With the clock ticking toward U.S. elections in 2020, Trump is facing resistance within his own Republican Party to strike a deal and avoid the tariffs. Many lawmakers are concerned about the potential impact on cross-border trade and increased costs for U.S. businesses and consumers on imported Mexican goods from cars and auto parts to beer and fruit.

John Thune of South Dakota, the No. 2 Senate Republican, told reporters: “We have conveyed our concerns to the administration. There are a good number of Republican senators who have expressed both publicly and privately to the White House their concerns about this.”

White House trade adviser Peter Navarro told CNN the tariffs might not be needed because the threat alone was enough to “have the Mexicans’ attention.”

U.S. border officers apprehended more than 132,000 people crossing from Mexico in May, the Trump administration said on Wednesday, the highest monthly total in more than a decade and reaching what officials said were “crisis” levels.

The conservative Trump administration wants Mexico to stop the migrant numbers rising and toughen the southern border with Guatemala – the main entry point for Central Americans into Mexico.

U.S. border authorities have said they are overwhelmed not so much by the number of migrants but by a shift in the type of person turning up at the border.

Increasing numbers of Central American families and unaccompanied minors seeking asylum after fleeing criminal violence in their home countries have been turning themselves in to U.S. border agents, who have long been geared up to catch mainly single, adult Mexicans trying to cross clandestinely.

“Our nation is experiencing an unprecedented border security and humanitarian crisis on the southwest border, both at and between our ports of entry,” Randy Howe, the executive director for operations, Office of Field Operations at U.S. Customs and Border Protection (CBP), told reporters on a call.

Howe said that on Tuesday alone, CBP apprehended more than 4,100 people and had 19,293 people in custody. “We are bursting at the seams. It is unsustainable,” Howe said.

Meanwhile the International Monetary Fund does not see the threat of a global recession brought on by a widening U.S.-China trade war and potential U.S. tariffs on Mexican goods and autos, IMF Managing Director Christine Lagarde said on Wednesday.

Lagarde told Reuters in an interview, however, that such escalating tariff threats were sapping business and market confidence, and could slow growth that is currently expected to improve next year.

“We don’t see a recession,” Lagarde said when asked whether U.S. President Donald Trump‘s threatened tariff actions could turn global growth negative. “Decelerating growth, but growth nonetheless — 3.3 percent at the end of this year, and certainly a strong U.S. economy. We do not see at the moment, in our baseline, a recession.”

The estimate includes a recent U.S. tariff increase to 25% on a $200 billion list of Chinese imports as well as Trump‘s threat to tax another $300 billion worth of consumer imports, representing nearly all trade between the world’s two largest economies.

The IMF’s estimate does not include Trump‘s threatened 5% tariffs on goods from Mexico starting on Monday over immigration issues and ratcheting up monthly. Mexico has overtaken China this year as the largest U.S. trading partner.

Lagarde called such actions “self-inflicted wounds” that must be avoided, a message she will take to a G20 finance ministers and central bank governors meeting in Fukuoka, Japan this weekend.

“One more tariff here, one more threat there, one more negotiation that has not yet started, add to a global uncertainty which is not conducive to additional growth,” she told Reuters.

In a briefing note for G20 finance leaders, the IMF said that U.S. tariffs and Chinese retaliatory measures currently in place could cut 2020 output 0.3 percent, with more than half of that impact coming from negative effects on business confidence and financial market sentiment.

The IMF also on Wednesday cut its China growth forecasts for 2019 and 2020 due to the growing trade tensions. The Fund is due to release preliminary findings of its annual assessment of the U.S. economy on Thursday.

The IMF is predicting 3.6 percent global growth for 2020, but said this outlook is vulnerable to trade tensions, uncertainty over Britain’s exit from the European Union, and uncertain recoveries in some stressed economies such as Argentina and Turkey.

Asked whether the IMF needed to take a tougher stance against U.S. tariff actions, Lagarde said the Fund had to keep presenting facts and economic research to tell leaders: “If you go in that direction, these are the consequences. It’s for political leaders and for policymakers to decide what is in their interest.”

Lagarde said she would discuss the IMF review of its quotas and other financial resources with G20 policymakers in Fukuoka this weekend.

While the United States is opposed to increasing the Fund’s quotas, or voting shares, Lagarde said she has had good dialogues with U.S. Treasury Secretary Steven Mnuchin about the need to maintain the IMF’s total lending war chest of about $1 trillion.

“Having gone through the crisis 10 years ago and knowing the power of the fire powder that you can commit, I think it’s critically important to give a signal that the capacity to commit $1 trillion today if there is a multiple-country crisis should actually be preserved,” Lagarde said, adding she was confident that the IMF will find ways to maintain its crisis lending fund by an October deadline.