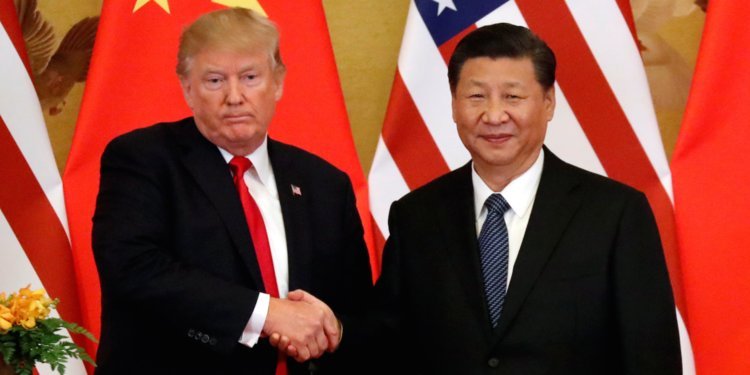 THE best way to deal with Donald Trump, especially if you are a foreign government negotiating trade issues, is to give him a little win. It doesn’t have to be big and important; he’s mainly interested in declaring a triumph, and he’ll supply the hot air to inflate your little concession into an allegedly major defeat free of charge. Just remember to look crest-fallen, and you’re home and dry.

Thus, for example, Trump’s recent ‘triumph’ over Mexico. He threatens escalating tariffs against Mexico, the Mexicans cave in after ten days, and the border problem is solved (until the next time he needs it). Only the nerds notice that the Mexican ‘concessions’ are almost all actions that Mexico had already promised to take in quiet, orderly discussions with the United States between December and March.

The Canadians did even better when renegotiating the North American Free Trade Agreement (NAFTA). Trump called it the “the worst deal ever signed,” but several clauses in the old treaty that Ottawa disliked were dropped. The only Canadian concession was to give US dairy producers access to 10 per cent of the Canadian milk market (that’s just 3 million people) – if they can persuade those Canadians to buy their bovine growth hormone-treated milk.

A very small price to pay, but nobody in Canada was so foolish as to crow out loud that they had seen the Americans off. The Canadian negotiators looked suitably hangdog and defeated, and Trump claimed the credit for a “great deal” and a “historic transaction”. Game, set and match to Ottawa.

And so to the grand drama of Trump’s tariff war with China. This one ought to be a no-brainer, because China is in an extremely vulnerable position. Its exports to America are worth almost three times as much as US exports to China, so it really cannot afford to lose the US market. Chinese President Xi Jinping should just give Trump enough to make him happy – he’s easily pleased – and move on to the next problem.

To the extent that Donald Trump calculates his moves beforehand, this would have been his calculation, and it is logically correct. But it didn’t work out that way: after a year of escalation and counter-escalation, the two countries are nearing the point where they will have imposed 25 per cent tariffs on all of each other’s exports. What went wrong?

Trump issued his usual threats and was the first to escalate at every step of the dance, but if the Mexicans and the Canadians can work around his histrionics, why can’t the Chinese?

Maybe it’s just pride: Xi simply can’t abide the vision of Trump capering with joy as he celebrates his victory over the Chinese. Or maybe it’s fear: letting Trump have a victory (and a real one, this time) would so humiliate Xi in the eyes of his own colleagues and rivals that his own position would be in danger.

It’s probably the latter. The negotiations seemed to be going well, with Trump predicting an “epic” deal and praising his dear friend Xi. Then suddenly in early May the White House complained that China was trying to re-negotiate points previously agreed, and the whole thing fell apart. It feels like Xi lost an argument at home – which would imply that he is considerably less secure in power than everybody assumed.

In either case, Xi is making a big mistake. The Chinese economy is not doing well. Factory output is declining, and new car sales fell last year for the first time since 1990. China’s total debt, even on untrustworthy official figures, is nearing three times annual GDP, which is the level where panic usually sets in. In fact, it’s the level at which Japan’s three-decade economic depression began in 1991.

Strip out all the unproductive investment and creative accountancy, and Chinese GDP grew last year by less than 2 per cent. Employment is stagnant, retail sales are falling, the stock market dropped by a quarter last year. This is not an economy in good shape to withstand a prolonged trade war.

The great fear of the Chinese Communist Party is that people will turn against the regime if the economy stalls and living standards stop rising. They certainly don’t love the regime. Why else would they obey it? This theory may be tested to destruction in the next few years.

So if Xi is not free to do a trade deal with the US and the Chinese economy tanks, what must he do to save Communist rule and his own power? He will need a foreign war, or at least the threat of one, in order to get nationalism on his side. Not war with the United States, of course. That would be crazy. But Taiwan would do nicely.

And this is one that you really can’t blame on Trump.

‘Those living in Turkish Cypriot properties have nothing to fear’