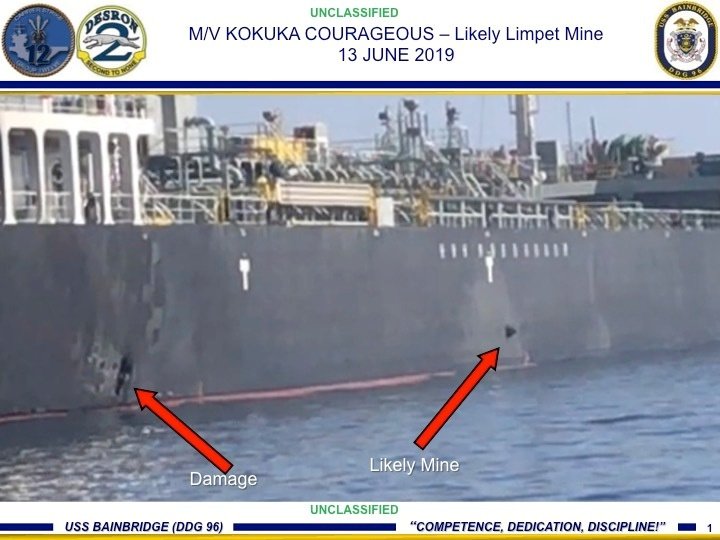 A picture released by U.S. Central Command shows damage from an explosion (L) and a likely limpet mine, on the hull of the civilian vessel M/V Kokuka Courageous in the Gulf of Oman in the Arabian Sea, in waters between Gulf Arab states and Iran, June 13, 2019. Picture taken June 13, 2019. U.S. Navy/Handout via REUTERS ATTENTION EDITORS- THIS IMAGE HAS BEEN SUPPLIED BY A THIRD PARTY.

I may well be oversimplifying all of this but there was a deal with Iran not to pursue nuclear weapons brokered by Britain, Russian, France, Germany and America, something that independent inspectors all agreed that Iran kept to.

Trump, knowing better than everyone involved from all of these Governments, decided to scrap the deal, rather than re-negotiate, leaving Iran to pursue nuclear technology.

Consequently Trump has now imposed crippling sanctions on Iran, in essence for what he’s done, not forgetting his ‘kind offer’ to level Iran with nuclear weapons.

Now we are told that the Iranians are attacking the tankers, promising on a number of occasions that they have proof but have yet to present it.

Whilst I have to accept the possibility that these attacks are indeed being carried out by Iran or their surrogates (whoever they are), it also occurs to me that America and Trump especially has a great deal to gain by ’staging’ these attacks; I suspect that we will never know for certain.

I do have my doubts if it’s really Iran that’s the problem and not just Trump.

Father’s smoking during pregnancy tied to asthma in kids