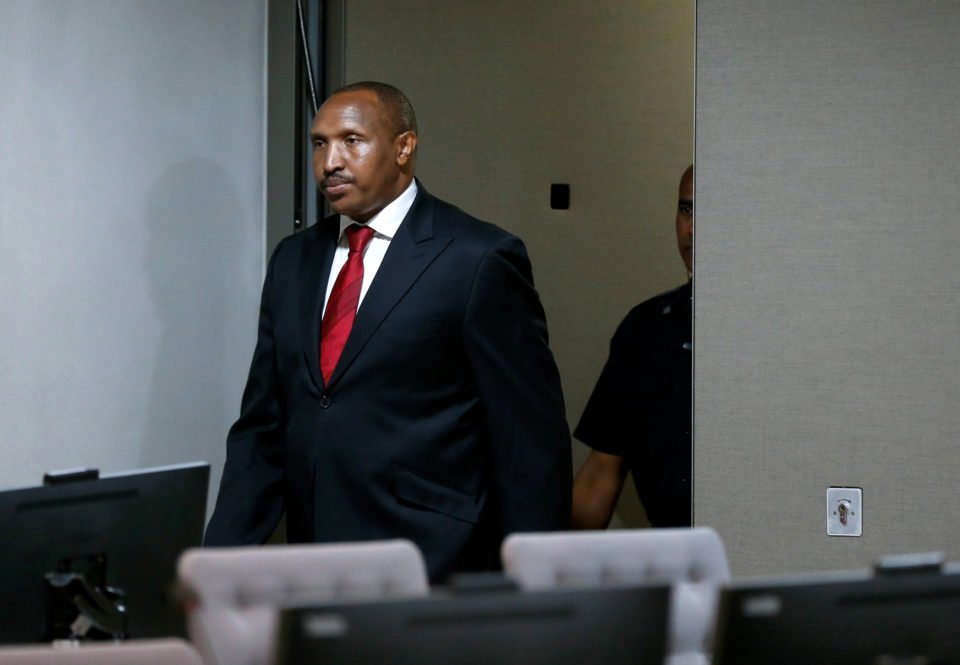 Congolese militia commander Bosco Ntaganda at his trial in The Hague

Ntaganda, 45, was convicted for acts committed while he was military operations chief at the Union of Congolese Patriots (UPC) militia in the east of the Democratic Republic of Congo in 2002-2003.

Ntaganda’s conviction is a rare success for prosecutors at the ICC, an international court set up in 2002 to prosecute war crimes and crimes against humanity when its member states are unable or unwilling to do so.

Ntaganda’s sentence will be determined at a later hearing.

“The chamber…having heard all the evidence mentioned by the parties, finds you as concerns count one, murder as a crime against humanity, guilty.” The court then continued to find Ntaganda guilty on all 18 charges against him.

His lawyers argued that Ntaganda had sought to maintain discipline among his troops, punishing those that violated rules of war.

Ntaganda, in a dark blue suit, showed no emotion as the sentence was read out. He has 30 days to appeal.

In the conflict in Congo, Ntaganda’s UPC, dominated by the Hema clan, targeted rival Lendu people for expulsion from the mineral-rich Ituri region. Hundreds of civilians were killed and many thousands were forced to flee. Ntaganda’s boss, UPC leader Thomas Lubanga, is currently serving a 14-year prison sentence after his conviction at the ICC. The court has also convicted one of their wartime opponents, Germain Katanga.

The court has also convicted Ahmad al-Faqi al-Mahdi, a Malian who confessed to destroying cultural property, and former Ivory Coast president Jean-Pierre Bemba — though Bemba’s conviction was overturned on appeal. A ICC warrant for Ntaganda’s arrest was first issued in 2006, and he turned himself in at the U.S. Embassy in neighbouring Rwanda in 2013, apparently having fled Congo due to infighting among military groups.

Judge Fremr paused at times during his summary to cite specific instances of acts Ntaganda was responsible for, such as his personal calls for children to join his forces, as well as killings by his men, including that of a pregnant woman who had been kept in a pit.

“Rape was common practice”, he said, citing one incident of a girl as young as nine being raped by fighters under Ntaganda’s command.