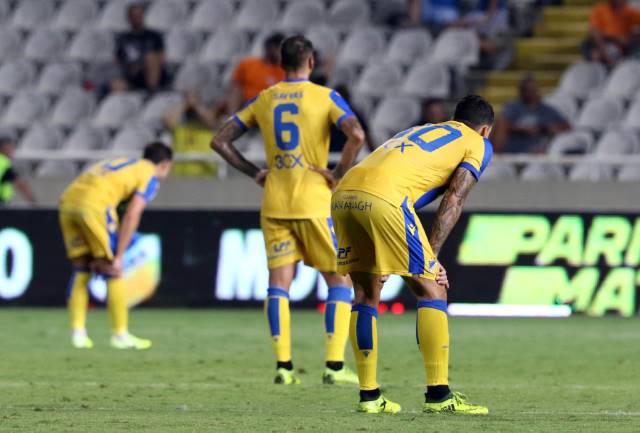 Talking to the local press on Wednesday, Apoel’s press spokesperson Nectarios Petevinos said that the 2-1 Champions League qualifying defeat against Qarabag FK did not do his team justice and that the Azeri’s were not the better team on the night.

However on Tuesday night Petevinos said something ‘slightly’ different on radio just after the game. He said that “we got what we deserved”.

Having watched the third qualifying round first leg match, his immediate post-game comment hit the nail on the head.

They say that stats don’t lie, well they did on Tuesday evening. Apoel had the lion’s share of possession (54% to 46%), had three times as many goal attempts (15-5) and the Azeri goalkeeper was called into action seven times as opposed to Apoel’s three.

However, despite a frantic start by Apoel, urged on by almost 10.000 fans, one could sense that the visitors had a game plan – defend deep and strike with lightning speed on the break.

Twice In the opening 20 minutes Qarabag could have taken the lead when they broke away and were thwarted first by a smart save by Apoel goalkeeper Belec when Zoubir was clean through and then a last ditch-tackle by Ioannou denied Emreli a simple tap-in.

Apoel’s only real chance of the opening half was when Azeri defender Marmadov almost beat his own goalkeeper with a backward header, the ball going agonisingly wide for a corner.

An early second half goal by Emreli and a second by Gueye with 20 minutes to go gave the Azeris a commanding lead with Merkis reducing the deficit deep in added time.

There were groans once again by the Apoel faithful as to how Italian coach Paolo Tramezzani lined up his side with his favoured 3-5-2 formation.

For yet another game Tramezzani’s formation proved ineffective and despite the fact that it was obvious that Apoel could not penetrate Qarabag’s well-organised defence, he stuck to it almost until the very end.

Qarabag coach Gurbanov outfoxed and outsmarted the Italian by a mile.

Only when Apoel begun hoisting high balls into the penalty area did they manage to create some danger in front of Qarabag goalkeeper Vagner.

Tramezzani took full responsibility after the game and praised his players for their efforts and commitment.

There is still confidence among the Apoel players and management that they can still qualify for the playoff round, but a lot of things need to change, least of all Tramezzani’s insistence on a given style of play.

He should also avoid playing players out of position, especially Mihajovic who for the third consecutive game was played on the left where it is obvious he cannot operate as he is a naturally right-footed player. On at least five-six occasions in the first half he had acres of space on the left either to cross or burst into the penalty area but he always checked onto his right as he was unable to cross, slowing down the attack and minimising any threat to the opposing goal.

Another player, Jacolis, favoured in the right wing-back role also appears to be out of his depth in that position. Jacolis impressed in his first season in Cyprus playing for Apollon as a speedy and tricky winger but as a wing-back he cannot really defend and is rarely allowed to venture forward, especially against good teams.

After the game Apoel’s Serbian striker Pavlovic said: “We don’t need a miracle, we don’t have to score 100 goals,” but any repeat of Tuesday night’s showing and they will definitely need something close to a miracle to go through.