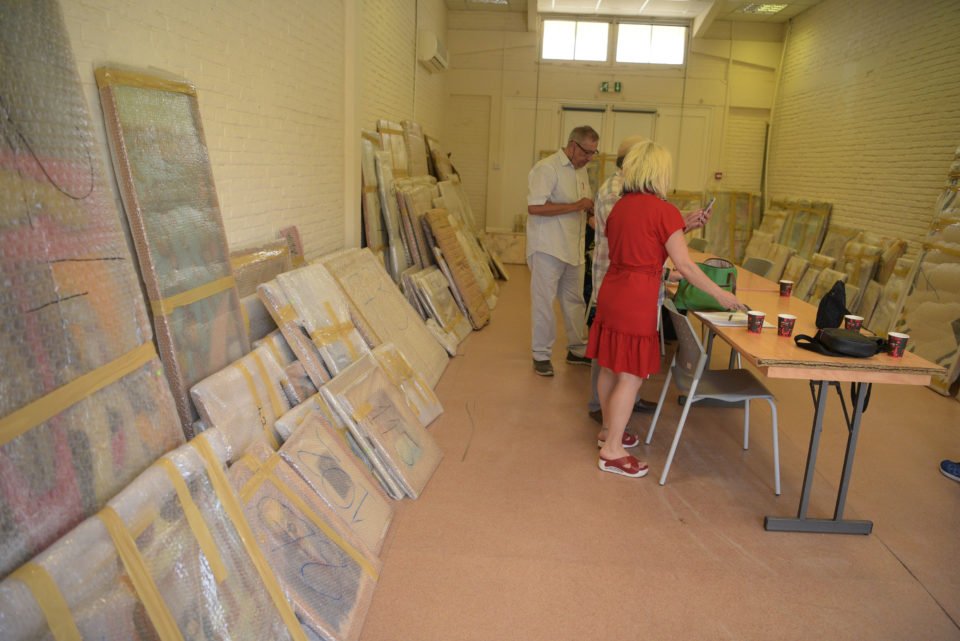 Members of the cutlural committee with the artworks that were returned

For 45 years, 219 pieces of Greek Cypriot art lay gathering dust in the north. Here’s how they were returned

Behind the 219 artworks left in Varosha in 1974 by their Greek Cypriot creators and only returned last week lies a long and overlooked history of efforts by several people determined they should be reunited with their owners.

In February, the two leaders agreed on a series of confidence-building measures, among which was the exchange of works by Greek Cypriot artists with audiovisual material by Turkish Cypriots stored in the archives of the Cyprus Broadcasting Corporation.

On September 3, members of the bicommunal technical committee on culture handed over the artworks at the UN-protected area of the Nicosia airport into the temporary guardianship of the UN pending an exhibition set to take place in October. After that, the daunting task of finding and returning the material to their rightful owners will begin.

“After the division of 1974, many paintings remained unowned in the north of the island,” Ruzen Atakan, artist and member of the technical committee on culture, told the Sunday Mail.

“Most of them were looted, confiscated, sold. But some were collected by conscientious, responsible officials who placed them in state-owned warehouses, where they remained for a very long time.”

These, 219 works of art in total, were rounded up by Turkish officials from artists’ studios, galleries and exhibitions that had been going on in the then-booming tourist resort of Varosha, now a fenced-off ghost town.

Who these officials were is not known – “that’s a history of its own,” Atakan said – leaving unclear whether or not they were motivated by the need to respectfully preserve the cultural heritage of the community that had fled Varosha.

According to Atakan, the works of art continued gathering dust in warehouses until the mid-1990s, when the director of the Turkish Cypriot department of culture, Mehmet Ali Serak, made the first attempt to arrange the return of the artworks, only to find that the political conditions at the time made such a move impossible.

The works were once again left to the mercy of time, until the bicommunal technical committee on culture was established at the initiative of the two leaders in 2016, and was tasked, by a resolute Mustafa Akinci, with speeding up the process of the paintings’ return.

“The Turkish Cypriot members of the committee carried out the sorting, dating and packaging of the paintings in mouldy and airless underground warehouses,” Atakan said.

Artists from both communities increased the numbers of hands of deck, despite having nothing to personally gain from the process, she said. “What excited them most was that the paintings were going to reach their former owners.”

The paintings were then ready for delivery once the agreement for their return was reached by the two leaders earlier in the year.

“Mustafa Akinci has the biggest share in the positive outcome of the process,” Atakan said. “We cannot deny the positive attitude of other politicians, but in my opinion, if Akinci was not determined, the paintings wouldn’t have been returned.”

Though some of the artworks carry legible signatures by renowned Greek Cypriot artists, such as Yiorgos Paul Georgiou, Stelios Votsis, Christoforos Savva, and Yiorgos Skotinos, many were either unsigned or do not have legible signatures.

That is why the exhibition in October is important, Atakan noted, as beyond restoring to each community long lost material essential to their cultural memory, the exhibition is expected to hold surprises and discoveries that the team working on identifying the creators of the works could not decipher.

The exhibition, however, may not be opened to the public, Atakan said, only to likely owners. “The two leaders chose the Ledra Palace hotel as the venue, but the building has been deemed unsafe, and so the UN has restricted the number of people who attend the exhibition for safety reasons.”

But these artworks are not the end of the line, she stressed. As can be expected, the returned paintings constitute one small part of the artwork that remained in the custody of the Turkish Cypriot community after 1974.

“The main hope is that this exchange can inspire others who may have artworks belonging to members of the other community, to come forward themselves and return them,” Atakan said.

And as a Turkish Cypriot peacekeeper and artist who contributed to the process of making it possible for her Greek Cypriot colleagues to regain possession of their work, Atakan does not consider such a development to be far-fetched.

“Mutual trust is not only a matter for politicians. In fact, practically, we can say that ordinary people are far ahead of politicians in terms of respecting the values of individuals different from ourselves,” she said.

Recalling memories that work as antidotes to the cynicism that can be fostered by events that seem to drag the possibility of reconciliation further away, Atakan said that there are numerous examples of peacemaking initiatives among the two communities that did not have to wait for the green light by their leaders.

“A large number of Turkish Cypriot families meticulously protected the photographs they found in the Greek Cypriot homes they had to settle in after 1974 in the north. Some of them searched and found the house owners before 2003 [when the crossings were opened], and returned the photos through Pile (Pyla) or even London.”’

But most made sure to return the photos belonging to Greek Cypriots when they came to visit their old houses in 2003, she said.

Atakan referred to her mother, who searched for the old house owner for many years, and found them 10 years later, when she met with them at the Alfa Mega supermarket and delivered their photos.

“I know that a Greek Cypriot living in a Turkish Cypriot home in the south gave the previous owner the key and said ‘Come whenever you want, stay as long as you want’,” Atakan said.

“Can you imagine how valuable, how human, and how emotional these behaviours are?”

But these stories, the opening of the borders, and the bicommunal events that took place after that, could not compare to the emotional charge during the exchange of the artworks and audiovisual material, Atakan said.

Waiting for the right time politically for the exchange also meant that for some it came too late. Atakan recalled a story of one of the artists whose paintings had been collected and who asked her years ago ‘where are my paintings?’.

“But the artist died some three to five years ago, and now that we’ve finally managed to return the works, I always remember what a shame that is.”

A website has also been launched by the committee (www.cyprusart.eu/en) for the collection of information about all artworks lost in Cyprus in 1974 with the hope of identifying their rightful owners and returning works to them.

The website operates in three languages: Greek, Turkish and English. It asks people to complete a five-part questionnaire giving information about each artwork and its owner.

The people of Hong Kong only want their freedom