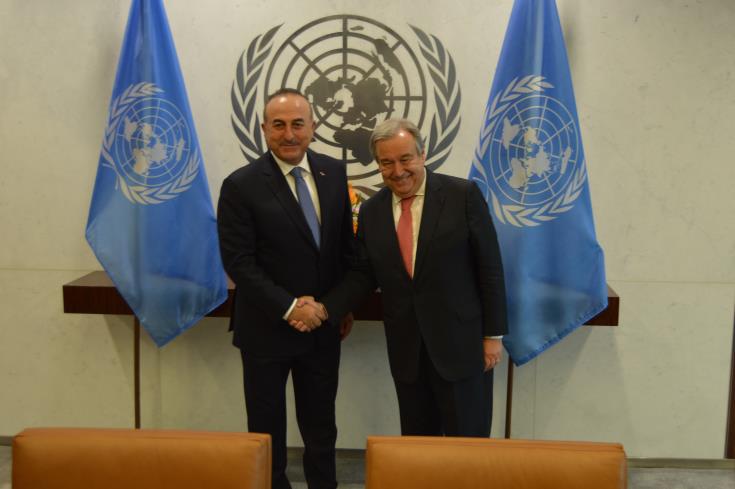 Cavusoglu, who is in New York to attend the UN General Assembly tweeted after a meeting with Guterres that they discussed “regional and international developments, particularly Cyprus and Syria.”

He also said they evaluated Turkey’s contributions to the UN and new cooperation projects.

The island’s two leaders are to also meet with Guterres on the sidelines of the General Assembly where they will discuss issues concerning the Cyprus problem.

Guterres’ spokesman Stephane Dujarric repeated Guterres’ statements earlier in the week that he would like to see an agreement on the terms of reference, for the settlement talks to start. “The Secretary-General’s ambition, is to help create conditions that can lead to the start of talks and he looks forward to meeting with all interested parties,” he said.

Anastasiades will address the UN General Assembly on September 26. His meeting with Guterres is slated for September 27.

He is to also meet the foreign ministers of China and Russia. Anastasiades is expected during his contacts to raise the issue of Turkey’s provocations in the Cypriot exclusive economic zone and announcements by the Turkish side on the opening of the closed-off town of Varosha.

Turkish Cypriot leader Mustafa Akinci is also scheduled to also meet with Guterres but the date of the meeting has yet to be announced.

While in New York, Anastasiades will also meet with Greece’s Prime Minister Kyriakos Mitsotakis. In a telephone conversation on Friday, the two leaders discussed the Cyprus problem and energy issues, as well as Turkish activities in the region, said government spokesman Prodromos Prodromou. They also exchanged views on the forthcoming meetings they will hold in New York, he said.

In a written statement, the government spokesman also said that Anastasiades and Mitsotakis agreed to meet after the latter’s meeting with Turkey’s Prime Minister Recep Tayyip Erdogan.

Anastasiades and his entourage depart on Saturday via London where he will stay in the British capital and deliver a speech at a dinner hosted by the National Federation of Cypriots in the UK.
He will return from New York on September 28.